Trump says US to impose tariffs on steel, aluminum imports 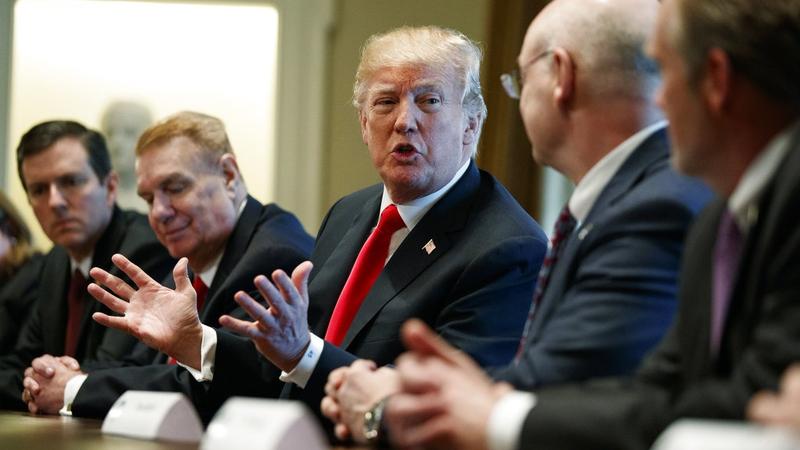 President Donald Trump speaks during a meeting with steel and aluminum executives in the Cabinet Room of the White House, March 1, 2018, in Washington. From left, Roger Newport of AK Steel, John Ferriola of Nucor, Trump, Dave Burritt of US Steel Corporation, and Tim Timkin of Timken Steel. (EVAN VUCCI / AP)

WASHINGTON - US President Donald Trump on Thursday said that he would impose tariffs on imports of steel and aluminum products in a move to protect US industry, but experts said this could hurt US producers and face legal challenges from trade partners.

The US is set to impose 25 percent of tariff on steel imports and 10 percent for aluminum, Trump said after a meeting with business executives.

"We'll be signing it next week. And you'll have protection for a long time in a while," said Trump.

News of the tariffs immediately hit sentiment on the Wall Street, with the Dow slumping over 500 points, more than 2 percent, in late trading.

Daniel Ikenson, a senior fellow at the Cato Institute, said trade restrictions could hurt US producers by exposing them to foreign rivals who are capable of offering lower prices in the US market.

US actions would face legal challenge by other World Trade Organization members, and they would also invite other members to invoke national security to protect favored industries, said Ikenson.

It's still unknown whether Trump's announcement on Thursday refer to blanket tariffs for all countries.

In April last year, Trump ordered the Commerce Department to study the impact of steel and aluminum imports on national security under seldom-used section 232 of the 1962 Trade Expansion Act.

Two weeks ago, the Commerce Department unveiled its recommendations for Trump to restrict imports of steel and aluminium products due to national security concerns, which drew oppositions from US lawmakers and businesses.

Trump's announcement on Thursday was higher than both recommendations.

Wendy Cutler, former Acting Deputy US Trade Representative and now vice president at the Asia Society Policy Institute, said "the imposition of tariffs on steel and aluminum will also reverberate throughout the US economy and possibly negate some of the benefits of the recent tax cuts."

"Downstream users, such as the automotive, aircraft, and boat industries, will pay more for inputs," Cutler said.

"This decision appears to closely reflect one of the Commerce Department's options for across the board action with no country exemptions, meaning it could also impact US allies, including Japan, Korea, Canada and Mexico," she said.

The Department of Defense (DoD) has cautioned against a backlash from US allies like Canada and South Korea.

"DoD continues to be concerned about the negative impact on our key allies regarding the recommended options," Defense Secretary James Mattis said in a memo sent to the Commerce Department.

In response, Canadian Trade Minister Francois-Philippe Champagne said any US tariff or quota imposed on Canada's steel industry would be "unacceptable."

Canada is the largest steel exporter to US market, with steel imports from Canada accounting for 16.1 percent of the US total steel imports in 2017, according to data released by the US Commerce Department.

Brazil and South Korea ranked the second and third largest steel exporters, with their shares at 13 percent and 10.2 percent, respectively. Steel imports from China only accounted for 2 percent of the US total steel imports in 2017.