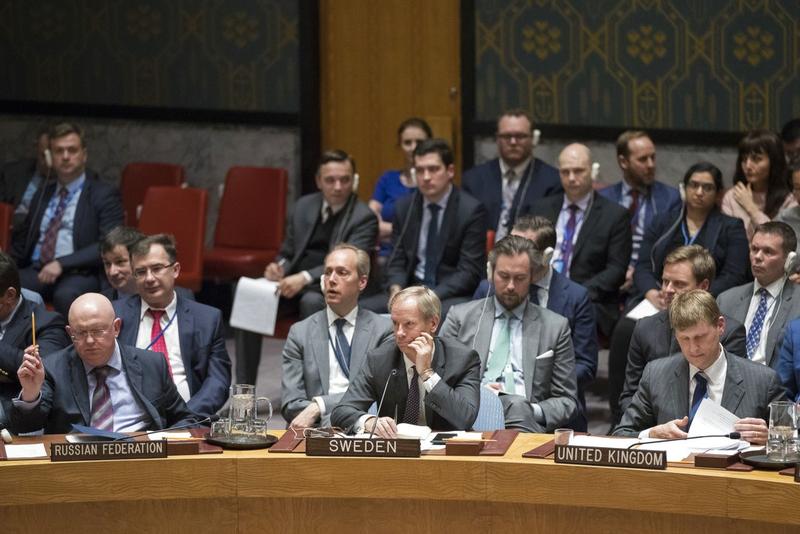 Russian Ambassador to the United Nations Vassily Nebenzia, left, gestures he would like to speak after British Deputy Ambassador to the United Nations Jonathan Allen, right, spoke during a Security Council meeting on the situation between Britain and Russia, on March 14, 2018 at United Nations headquarters. Britain said on Wednesday it would expel 23 Russian diplomats and sever high-level bilateral contacts after Russia ignored a deadline to explain how a Soviet-developed nerve agent was used against ex-spy Sergei Skripal and his daughter Yulia. (MARY ALTAFFER / AP)

UNITED NATIONS - In the latest sign of rising tensions between Britain and Russia over the poisoning of a former Russian spy, the two countries' envoys clashed at a UN Security Council emergency meeting on Wednesday.

The exchange of barbs came shortly after British Prime Minister Theresa May announced that her government will expel 23 Russian diplomats, cancel high-level bilateral contacts with Russia, and freeze Russia state assets "wherever we have the evidence that they may be used to threaten the life or property of UK nationals or residents."

Russian ambassador to the United Nations Vassily Nebenzya said on Wednesday Britain's allegations that Moscow was responsible for a nerve attack were "completely unacceptable."

"The Russian Federation thinks it is completely unacceptable to launch unjustified accusations as contained in the letter from Theresa May dated March 13 to the Secretary-General of the United Nations," Nebenzya said at a UN Security Council emergency meeting regarding accusations of the use of a nerve agent in the United Kingdom on March 4.

"We demand that material proof be provided of the allegedly found Russian trace in this high-resonance event. Without this, stating that there is incontrovertible truth is not something that we can take into account," he added.

Russia demands material proof be provided of the allegedly found Russian trace in this high-resonance event. Without this, stating that there is incontrovertible truth is not something that we can take into account

Britain's deputy UN ambassador, Jonathan Allen, said hundreds of his countrymen had potentially been exposed to the agent.

He said Sergei Skripal, a 66-year-old former Russian spy who became a double agent for Britain, and his 33-year-old daughter Yulia, were poisoned with "Novichok," which he insisted is a weapon that cannot be manufactured without the use of the highest-grade state laboratories.

"This was no common crime," he said. "It was an unlawful use of force."

Russia dismissed the accusations as "fairy tales" and denied any involvement in the attack.

Speaking at a daily brief on Wednesday, a deputy spokesperson of UN Secretary General Antonio Guterres expressed concern over the poisoning incident.

"The secretary-general is deeply concerned over the reported use of a nerve agent in the United Kingdom to harm or kill persons," Farhan Haq said.

"The use of nerve agents as a weapon under any circumstances is unacceptable and its use by a state will constitute a serious violation of international law."

Haq also said while the secretary general was not in a position to attribute responsibility for the attack, he strongly condemned the use of any nerve agent or chemical weapons and hoped the incident would be thoroughly investigated. 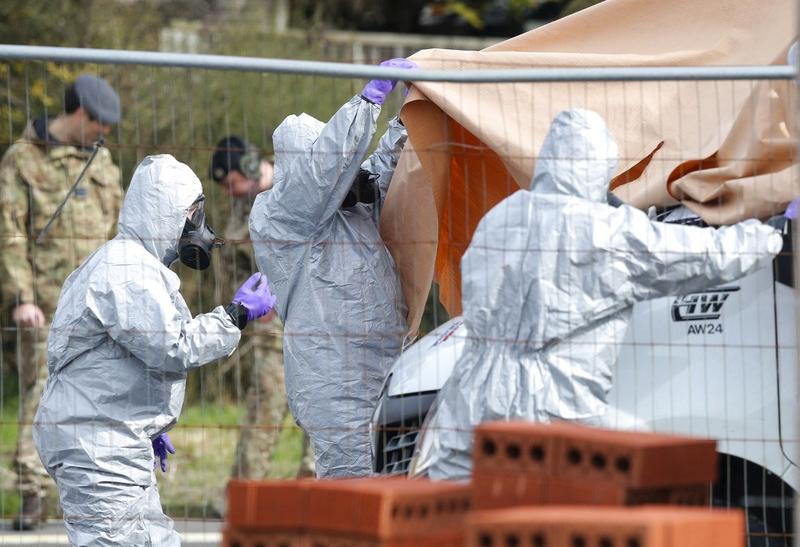 Soldiers wearing protective clothing cover a tow truck in Hyde Road, Gillingham, Dorset, England as the investigation into the suspected nerve agent attack on Russian double agent Sergei Skripal continues on March 14, 2018. Authorities cordoned off several sites in and near Salisbury, 90 miles (145 kilometers) southwest of London as part of their probe. (PHOTO / AP)

At the same UN meeting, US ambassador to the UN, Nikki Haley, said that the Trump administration "stands in absolute solidarity" with the UK, following the nerve agent attack against the former Russian spy and his daughter in the English city of Salisbury last week.

The United States believes that Russia "is responsible for the attack" on the two people using a military-grade nerve agent, Haley added.

The White House issued a statement on that day in support of Britain, saying London's decision to expel the Russian diplomats was justified.

It noted that the incident "fits into a pattern of behavior in which Russia disregards the international rules-based order, undermines the sovereignty and security of countries worldwide, and attempts to subvert and discredit Western democratic institutions and processes."

France said it would not take any position on the issue before "the facts are fully proven."

Ma Zhaoxu, Chinese ambassador to the UN, said China hopes that "a comprehensive, objective and impartial investigation could be conducted based on facts and in accordance with relevant international rules and reach an evidence-based conclusion that can stand the test of facts and history."

"We hope relevant parties could properly handle this issue through appropriate channels," he said.

Sergei Skripal and his daughter were found slumped unconscious on a bench outside a shopping center in the southern English city of Salisbury on March 4. They remain in a critical condition.

British Prime Minister Theresa May announced on Wednesday that her government will expel 23 Russian diplomats from Britain and will freeze Russian state assets "wherever we have the evidence that they may be used to threaten the life or property of UK nationals or residents."