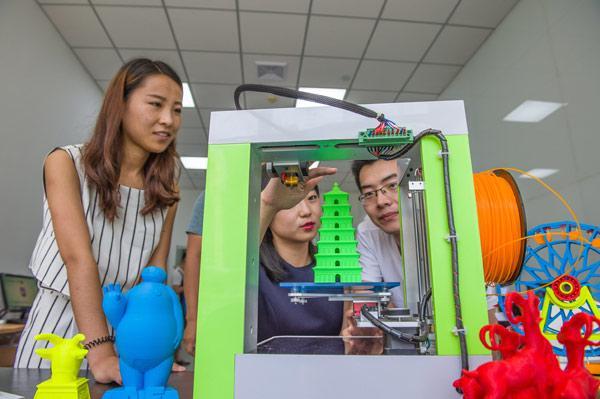 Employees look at a 3D printing model in their office at an innovation park in Xi'an, Shaanxi province, China, July 28, 2016. (Photo / VCG)

BEIJING - China is steadily working its way toward a higher position on the world's innovation index ranking, as a report released Friday placed it 17th on the index measuring innovation capability out of 40 major ranked countries.

The national innovation index report 2016-2017 by the Chinese Academy of Science and Technology for Development (CASTED) shows the top five countries as the United States, Japan, Switzerland, the Republic of Korea, and Denmark.

China moved one place higher in 2016, surpassing Belgium. It is the only developing country among the top 20 on the index.

China has set the goal of lifting its overall national innovation capability to 15th or above by 2020.

Wu Yishan, vice president of CASTED, said that with continuous injection of innovation resources and deepening reform in the science and technology system, China's innovation efficiency and capability would continue to improve.