This combo picture shows Iran's President Hassan Rouhani  (left) and US President Donald Trump. The US President said on May 8, 2018 that he will withdraw his country from the Iran nuclear deal, a decision that immediately drew global frustration and outcry. (PHOTOS / AFP)

WASHINGTON/ANKARA/BRUSSELS/MOSCOW/TOKYO - US President Donald Trump said on Tuesday that he will withdraw his country from the Iran nuclear deal, a decision that immediately drew global frustration and outcry.

The pullout of the United States from the deal, which eased sanctions on Iran in exchange for the country limiting its nuclear program, risks sparking an arms race in the Middle East, experts said.

In a televised speech from the White House, Trump announced the exit. He said that he will not sign the waiver of nuke-related sanctions against Iran, but re-impose sanctions lifted under the accord against Tehran and nations it has business links with.

Iran's President Hassan Rouhani said on Tuesday that Iran would remain committed to the deal. "If we achieve the deal's goals in cooperation with other members of the deal, it will remain in place. ... By exiting the deal, America has officially undermined its commitment to an international treaty," Rouhani said in a televised speech.

The United States will impose the highest level of economic sanctions on Tehran. Any nation that helps Iran in its quest for nuclear weapons could also be strongly sanctioned by the United States

"I have ordered the foreign ministry to negotiate with the European countries, China and Russia in coming weeks. If at the end of this short period we conclude that we can fully benefit from the JCPOA with the cooperation of all countries, the deal would remain," he added.

The Joint Comprehensive Plan of Action (JCPOA) is the full name for the nuclear deal struck in 2015.

"He (Trump) threatened both the (Islamic) establishment and the Iranians. I announce on the behalf of the Iranian nation that 'Mr Trump, you cannot do anything," Khamenei said, according to his official website.

The speaker of Iran's parliament said on Wednesday that US President Donald Trump is not fit for his job, according to the website of the Iranian judiciary.

A number of Iranian lawmakers, in a symbolic move, set fire to US flag and a copy of the JCPOA in the parliament to protest over Trump’s decision, Tasnim news agency reported.

Iran's army chief said that the biggest damage caused by the nuclear deal came from sitting down with the United States at the negotiating table and giving Washington legitimacy, the Iranian Students' News Agency (ISNA) reported.

The JCPOA was struck between Iran, the five permanent members of the UN Security Council - the United States, Russia, China, Britain and France - and Germany.

Trump repeated his rhetoric against Iran and the deal, saying it had failed to prevent Iran from developing nuclear weapons or supporting terrorism in the region.

The JCPOA "allowed Iran to continue enriching uranium" and "lifted crippling economic sanctions" on Iran in exchange for "very weak limits" on its nuclear activity, "and no limits at all" on its efforts to expand regional influences, he said.

"The deal's sunset provisions are totally unacceptable," He said. "If I allowed this deal to stand, there would soon be a nuclear arms race in the Middle East. Everyone would want their weapons ready by the time Iran had theirs."

The United States will impose "the highest level" of economic sanctions on Tehran, he said. "Any nation that helps Iran in its quest for nuclear weapons could also be strongly sanctioned by the United States."

As for the possible exacerbation of trans-Atlantic division over his decision, Trump only said that "we are unified in our understanding of the threat, and in our conviction that Iran must never acquire a nuclear weapon."

Trump's decision came on the heels of visits to the United States by French President Emmanuel Macron, German Chancellor Angela Merkel and British Foreign Secretary Boris Johnson. Macron even proposed a last-ditch side plan to appease Trump, but had failed to convince him. 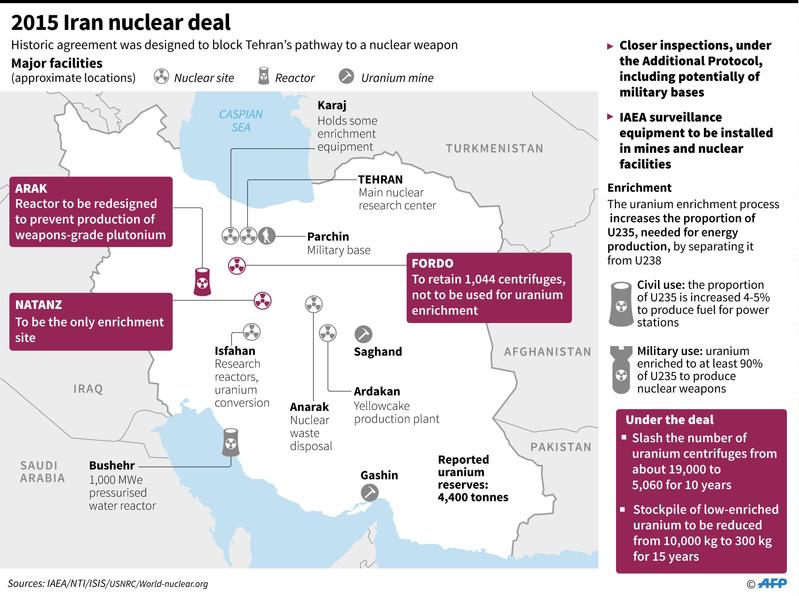 The White House said later that Trump had "directed his administration to immediately begin the process of re-imposing sanctions related to the JCPOA," and "the re-imposed sanctions will target critical sectors of Iran's economy, such as its energy, petrochemical, and financial sectors."

"Those doing business in Iran will be provided a period of time to allow them to wind down operations in or business involving Iran," it added. "Those who fail to wind down such activities with Iran by the end of the period will risk severe consequences."

US Secretary of Treasury Steven Mnuchin noted in an announcement that "sanctions will be reimposed subject to certain 90 day and 180 day wind-down periods."

"At the conclusion of the wind-down periods, the applicable sanctions will come back into full effect. This includes actions under both our primary and secondary sanctions authorities," he added.

The Iranian President said his country will remain in the deal, adding he has asked the Iranian foreign minister to initiate negotiations with the European partners as well as China and Russia over the fate of the deal

Meanwhile, Secretary of State Mike Pompeo said that the United States "will be working with our allies to find a real, comprehensive, and lasting solution to the Iranian threat."

Trump's decision to abandon the Iran deal signed between Iran and the six world powers of Britain, China, France, Germany, Russia and the United States has sparked domestic and global concerns.

In a joint statement released by Macron's office, French, German and British leaders regretted the US decision.

Macron, Merkel and Theresa May reiterated their "continued commitment" to the Iran nuclear deal, stressing that it "is of particular importance to our shared security."

Trump's predecessor Barack Obama, under whose administration the deal was signed, said in a Facebook post that Trump's announcement is "so misguided" and "a serious mistake."

"The JCPOA is working," Obama said, adding that "the United States could eventually be left with a losing choice between a nuclear-armed Iran or another war in the Middle East" without the landmark deal.

UN Secretary-General Antonio Guterres called the nuclear deal "a major achievement" that "has contributed to regional and international peace and security" and said he was "deeply concerned" by the US decision. He called on the other signatories "to abide fully" by their commitments.

EU foreign policy chief Federica Mogherini said Europe will abide by the JCPOA, adding she was "particularly worried" about the possible repercussions of Trump's decision.

The Japanese government said it was concerned about the potential ramifications following the United States' decision to withdraw from the international deal on Iran's nuclear program.

In a televised address in Israel, Israeli Prime Minister Benjamin Netanyahu however praised the US president's decision as "a historic move."

Saudi Arabia also welcomed Trump's move in a statement published on the state-run news agency, saying that Iran had exploited the agreement's economic benefits to continue destabilizing activities in the region by developing ballistic missiles and supporting militias— issues not addressed in the accord. 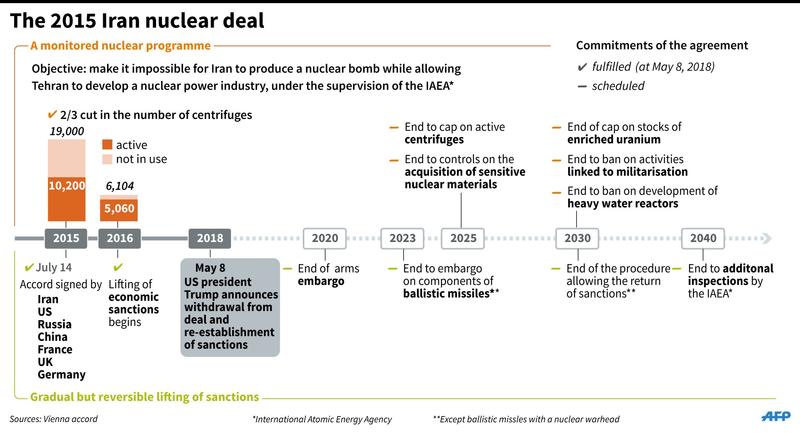 Experts from the Washington-based Arms Control Association also denounced the decision. Daryl G. Kimball, the group's executive director, said Trump's announcement "is an irresponsible act of foreign policy malpractice" and "a twofold abrogation of US commitments."

"Through his reckless actions, Trump is precipitating a proliferation crisis rather than working with our allies to develop a long-term diplomatic strategy to build on the agreement in the years ahead," Kimball said.

Brookings Institution senior fellow Darrell West told Xinhua that "the risk is his decision will spark an arms race in the Middle East."

"Iran may restart its nuclear program and that could propel Saudi Arabia to develop its own nuclear program. The region is likely to become more volatile and chaotic as a result of the deal nullification," he said.

(With inputs from Reuters and The Associated Press)