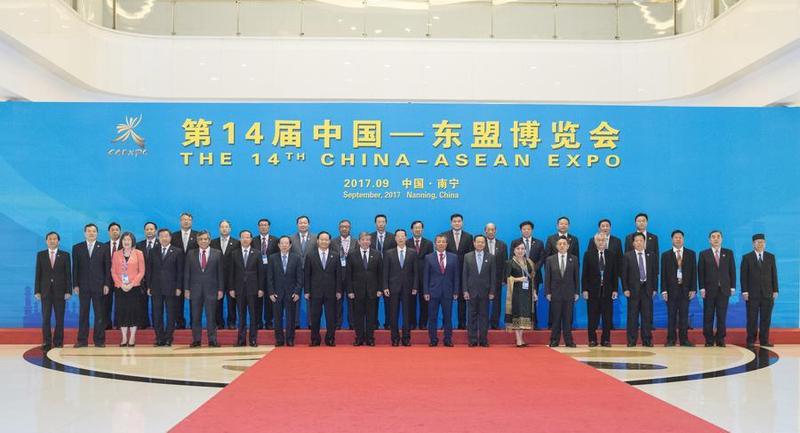 Chinese and foreign guests of the 14th China-ASEAN Expo pose for a group photo in Nanning, China, on Sept 11, 2017. (WANG YE / XINHUA)

NANNING - Vice-Premier Zhang Gaoli has proposed that China and the Association of Southeastern Asian Nations (ASEAN) deepen cooperation in industrial capacity and trade.

"China's equipment is cost efficient, and China has advantages in technology, training and financing, enabling China and ASEAN countries to nurture new comparative advantages and create new room for economic growth," Zhang said. "China is willing to join hands with ASEAN to carry out industrial cooperation in the fields of clean energy, modern communication, cement, electric power and steel."

China hopes to sign more agreements with ASEAN countries in currency swaps, as well as in investment, expanding the use of yuan settlement, and guiding capital from both sides into Belt and Road projects.

Zhang also called for full implementation of a protocol signed in 2015 on upgrading the China-ASEAN Free Trade.

"China is willing to expand imports from ASEAN countries. We welcome them to attend the first China International Import Expo to be held in 2018," Zhang said.

He also expressed hope for infrastructure projects, including railways, roads and ports to better connect China and ASEAN.

Both sides should make use of the time to push forward the formulation of a 2030 blueprint on the China-ASEAN strategic partnership, Zhang said.

China and ASEAN have achieved substantial collaboration results in various areas, including trade and finance, the vice-premier said.

In the past few years, China and the Association of Southeast Asian Nations (ASEAN) members have been strengthening connectivity in policy, infrastructure, trade, finance, and people-to-people exchanges, injecting new vitality to the ancient Maritime Silk Road, Zhang said.

In terms of finance, China and the 10 ASEAN countries were among the founding members of the Asian Infrastructure Investment Bank, which since 2016 has provided funding totaling US$2.8 billion to 17 projects in nine developing countries in Asia.

The 100-billion-yuan (US$15.32 billion) additional fund to the Silk Road Fund as well as special loans offered by the country's policy banks to support the Belt and Road Initiative will benefit more ASEAN countries, Zhang said.

The two sides have also made big strides on policy, infrastructure and people-to-people exchanges, proving that the Belt and Road was in the common interests of all parties and in line with regional and global collaboration trends, Zhang said.

CHINA TO EXPAND TOURISM WITH ASEAN

China is willing to expand cooperation in tourism with ASEAN, as this year marks the China-ASEAN Year of Tourism, said the vice-premier.

As China and ASEAN both have abundant tourism resources with their own characteristics, increasing trips made between the two sides have played an important role in enhancing exchanges and understanding between their peoples, according to Zhang.

China is ASEAN's largest source of foreign tourists. In 2016, more than 38 million trips were made between the two sides and more than 2,700 flights flew every week.

Zhang said the pair would increase the number of students studying in each other's countries.