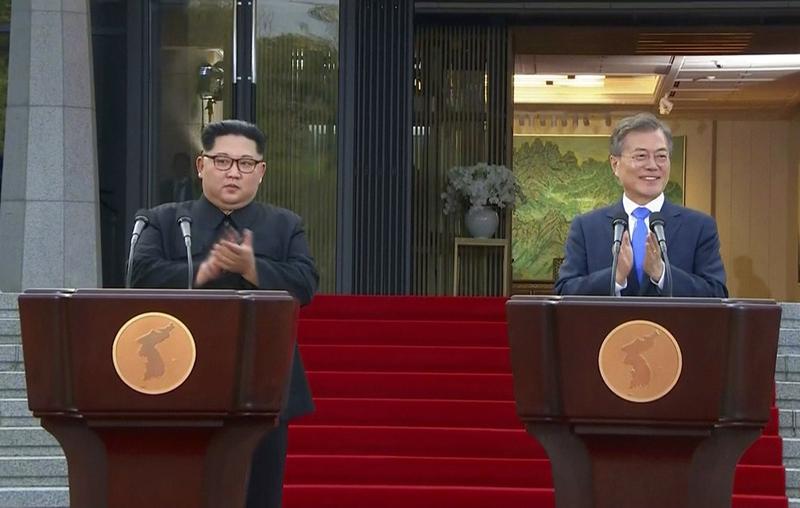 In this image made from video provided by Korea Broadcasting System (KBS), DPRK leader Kim Jong-un (left) and ROK President Moon Jae-in applaud at the end of their joint announcement at the border village of Panmunjom in the Demilitarized Zone, April 27, 2018. (PHOTO / AP)

SEOUL/GOYANG, Republic of Korea - Republic of Korea (ROK)'s President Moon Jae-in and Kim Jong-un, top leader of the Democratic People's Republic of Korea (DPRK), confirmed a common goal of complete denuclearization and agreed to push for multilateral talks to turn the current armistice agreement into a peace treaty after their first-ever summit meeting at the border village of Panmunjom Friday.

Moon and Kim held a signing ceremony for their joint declaration, titled the Panmunjom Declaration for Peace, Prosperity and Unification of the Korean Peninsula, at Peace House on the ROK side of Panmunjom that has divided the rival Koreas since the end of the 1950-53 Korean War.

The leaders confirmed their common goal of realizing a nuclear-free Korean Peninsula via complete denuclearization.

They agreed to actively push for talks, involving the ROK, the DPRK, China and the United States, to establish a permanent, firm peace regime with a view to declaring an end to the Korean War and turning the armistice agreement into a peace treaty this year, marking the 65th anniversary of the signing of the armistice agreement. 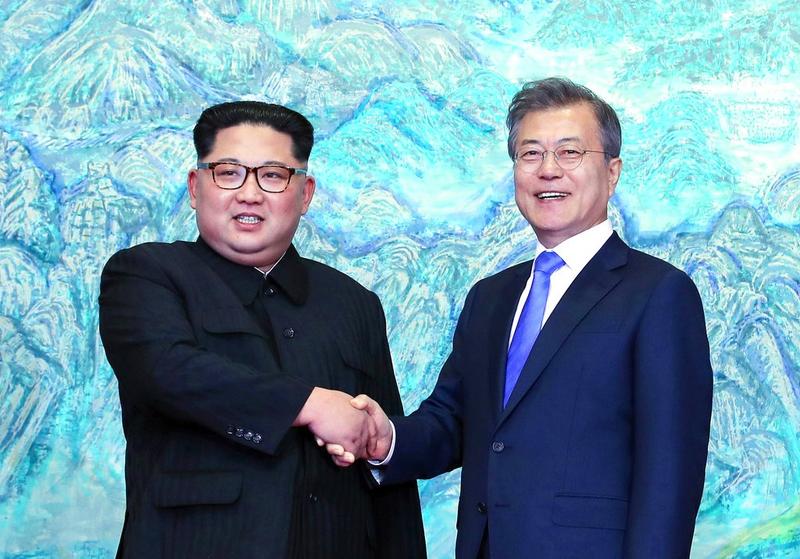 Ending the current abnormal armistice and establishing a firm peace regime on the peninsula is a historical mission that cannot be delayed any more, the joint declaration said.

Moon agreed to visit Pyongyang this fall and continue to have frequent discussions with Kim through regular meetings and direct telephone conversations to build mutual trust. A hotline between the two leaders was set up a week earlier, the first such communications channel between the leaders of the two Koreas.

After the signing ceremony, Moon and Kim hugged each other and smiled broadly, heralding a new era of peace on the peninsula.

The Panmunjom Declaration is composed of three main themes: the establishment of a peace regime, efforts to ease military tensions, and co-prosperity and unification of the two Koreas.

Earlier on the day, Moon greeted Kim at the military demarcation line at 9:30 am (0030 GMT), making Kim the first DPRK leader to set foot in ROK since the 1950-53 Korean War.

"I was excited to meet at this historic place and it is really moving that you came all the way to the demarcation line to greet me in person," Kim said as he grasped Moon's hand across the border.

"It was your big decision to make it here," said Moon, dressed in a dark suit and light blue tie, who invited Kim to step over the line in the pavement, which he did. 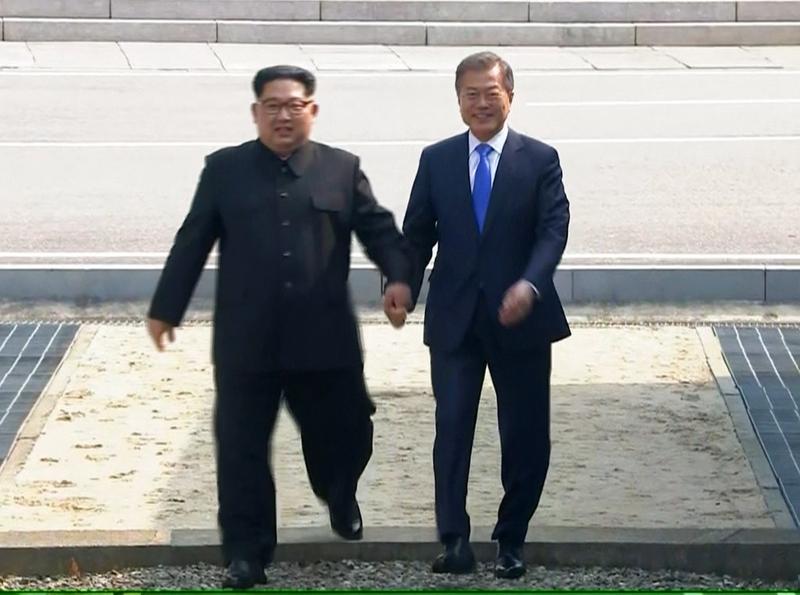 In this image taken from video provided by Korea Broadcasting System April 27, 2018, DPRK leader Kim Jong-un, left, crosses the border into ROK, along with ROK President Moon Jae-in for their historic face-to-face talks, in Panmunjom. (KOREA BROADCASTING SYSTEM VIA AP)

Shaking hands again, Moon, 65, and Kim, 34, turned to face photographers on the DPRK side and then the ROK side before Kim grabbed Moon's hand and, in an unplanned move, invited him to step across the border into the DPRK, where they stood face-to-face to talk a bit more.

Kim said he felt a "swirl of emotion" as he walked into ROK, wondering "why it took so long" to get to this place, he told Moon later, at the start of their meeting.

The two were handed flowers by an ROK boy and girl, residents of a village situated in the demilitarized zone.

Moon greeted Kim at the military demarcation line at 9:30 am (0030 GMT), making Kim the first DPRK leader to set foot in ROK since the Korean War

Walking on a red carpet rolled out for the two heads of state, the pair were met by a ROK honor guard in historical costumes and playing traditional music.

Kim wore glasses and his trademark black Mao suit, while the rest of the DPRK delegation appeared in military uniforms or Western attire.

Kim stopped to sign a guest book in ROK's Peace House before the two leaders met for a private discussion.

"A new history starts now. An age of peace, from the starting point of history," Kim wrote in Korean in the book, dating and signing the entry.

"The whole world is watching" our meeting amid high expectations, Moon said at the opening. "We have a lot on our shoulders."

He said Kim's crossing the border had transformed Panmunjom into a "sign of peace, not a sign of division".

Kim responded with equal optimism, saying that "with determination, we will be heading toward a better place to makeup for the lost 11 years" since the last summit.

After a meeting in the morning, they held a commemorative event to plant a pine tree, hoping for peace and prosperity on the Korean Peninsula.

Moon and Kim held a commemorative event to plant a pine tree, hoping for peace and prosperity on the Korean Peninsula

The pine tree was planted beside a path near the military demarcation line (MDL), along which late Hyundai Group founder Chung Ju-yung in 1998 delivered a total of 1,001 cows to the DPRK farmers to help improve inter-Korean relations.

Moon and Kim used a mixture of soil and water from both countries. The pine tree dates back to 1953, the year the Korean War ended in an armistice. The peninsula technically remains at war.

Engraved on the stone plaque for the tree are a phrase "Peace and Prosperity Are Planted," and signatures of the two leaders

After the tree-planting ceremony, Moon and Kim took a stroll along the Footbridge to talk privately with no one accompanying them. At the end of the bridge stands a signpost of the MDL symbolizing the division of the two sides.

The meeting came weeks before Kim is due to meet US President Donald Trump.

Just days before the summit, Kim said DPRK would suspend nuclear and long-range missile tests and dismantle its only known nuclear test site.

Moon traveled to the meeting in a large motorcade, stopping briefly to greet dozens of summit supporters waving ROK flags near the Blue House.

Trump called the meeting betwen Kim and Moon "historic", saying the United States and all of its people should be very proud of what is now happening on the Korean Peninsula.

He also thanked Chinese President Xi Jinping for the progress, saying, "Without him it would have been a much longer, tougher, process!"