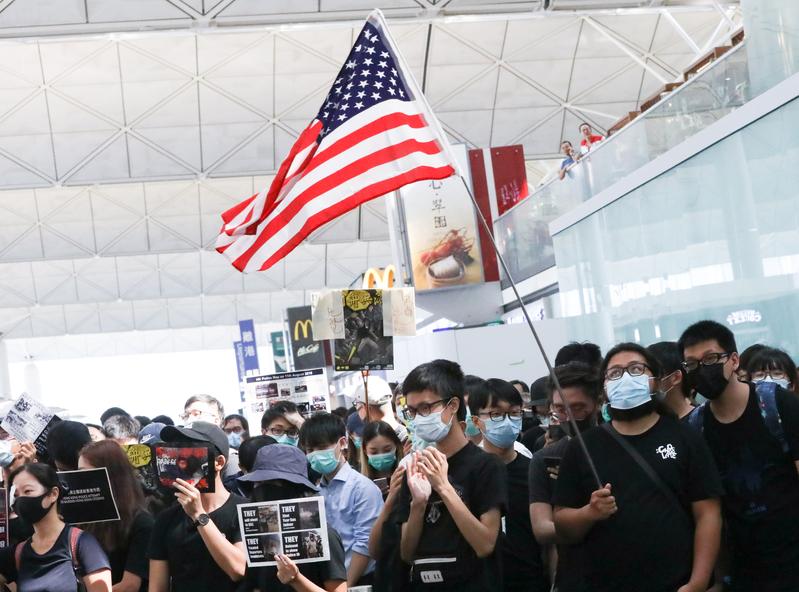 A protestor holds up an American flag at Hong Kong International Airport during unauthorized assembly on Tuesday. CHINA DAILY

There’s been a whole lot of controversy over flags lately.

This shouldn’t be surprising — they’re designed to be symbols, after all. But their recent treatment by protesters in Hong Kong shows a flagrant misunderstanding of the city’s past. Many demonstrators have taken to waving the colonial flag used for the territory before its return to China in 1997, and some went a step further, flaunting Great Britain’s current Union Jack or the flag of the United States to show their desire for Western-style government or even intervention by those countries.

Meanwhile, the flag of the People’s Republic of China and its national emblem have been desecrated in a series of attacks as violence in the city escalates. Militants have shown their dissatisfaction with a proposed extradition amendment by vandalizing these objects, inflaming tensions in a city already reaching its boiling point. Never mind that the amendment was suspended weeks ago; who needs coherence when there’s stuff to destroy? This isn’t just a destructive, counterproductive approach to enacting change, though — it’s an attitude that beggars belief for anyone who knows the history of these nations.

Whitewashing the crimes of colonial powers, to say nothing of waving their flag, demonstrates a profound ignorance of history. Imagine for a moment what the people killed in anti-colonial fights across the globe would think if they saw this wholesale embrace of their tormentors

Just in case there’s any genuine confusion, I can provide a couple of quick reminders.

After slaughtering thousands in the Opium Wars, Britain flooded the country with the drug, killing countless more Chinese people. The heinous trade generated a feeding frenzy as multiple countries sapped China of its resources and left huge swathes of its population docile and dependent on an opiate fix. Unequal treaties, signed in quick succession by scheming imperialists, stole chunks of Chinese territory for foreign use.

It wasn’t until the Communist Party of China took power in 1949 that the country began to recover from this national trauma; rehabilitation programs and an intense anti-opium campaign wiped away the last vestiges of Western narco-imperialism.

Everywhere, except Hong Kong, at least. For much of its time as a British holding, Chinese were treated as second-class citizens, at best. An elite class of colonial administrators lorded their privileges and wealth over their subjects, and many Chinese were refused positions in any but the most menial jobs. English was the only official language through 1974, and flogging remained a criminal penalty through 1989. Legal language against racial discrimination wasn’t adopted until 1991 — and wasn’t fleshed out until the colonial period was over. The British operated what can only be described as an apartheid state up to the last possible moment.

Though it’s been over two decades since Hong Kong’s return to China, the scars of this period remain, as do those across South America, Africa and other parts of Asia — permanent reminders of the wages of colonialism. Deep wounds don’t just disappear, and there’s a reason those who wave it off and say it should be forgotten are largely the beneficiaries of this legacy — or, oddly enough, their descendants.

The exploitation of the early period fueled industrialization and allowed the West to develop and grow to a point where even in a “post-colonial” era they remain the most advanced economies known to man. As their concentration of wealth and power persists, so do the structures they built in their image — even after renunciation of direct control. Without a complete, systemic change, those unequal relations continue on their merry way.

All this is the context for the present situation. For the latter period of its colonial occupation, the British switched tactics, opting for the carrot more frequently than the stick. Though it used a lighter touch in administration after World War II — and this approach had limits; see above — Britain never went so far as to risk its own position. Indeed, when push came to shove, the cudgel was still happily relied upon; discontent in the 1950s and ’60s was smothered with a force, today’s protesters couldn’t begin to imagine.

Police, after all, did nothing to stop the Legislative Council from being ransacked and defaced with the colonial flag early last month for fear of violent clashes — compare that treatment with the hundreds killed in protests under British rule. What’s more, even limited improvements in governance were done cynically, as a means of pacifying a restive population. “Democratic” reforms were never seriously pursued until negotiations began between Britain and China for the return of Hong Kong to China. Surely we can put two and two together and see this as more than mere coincidence.

But for some, this strategy worked. With a few token concessions — none of which compare to the rights the population now enjoys — certain segments were won over to the idea of living as colonial subjects. This led to a sort of Stockholm syndrome, where despite being occupiers, the British were looked upon more favorably as time passed. Sovereignty and self-determination were sacrificed at the altar of getting ahead in a notoriously unequal system, where class divisions only grew more and more pronounced.

Long-standing inequalities with deep roots in the colonial period are now blamed by nostalgics on post-handover administration, and this misplaced blame is amplified by bad actors with an ax to grind. These contradictions won’t be resolved so long as outside forces attempt to interfere, and there certainly won’t be any progress if the city’s past is viewed through rose-colored glasses.

Wishing for a period characterized by violence and prejudice — no matter how soft-pedaled things got right before Hong Kong’s return — plays into the hands of those who want to see China fractured. Whitewashing the crimes of colonial powers, to say nothing of waving their flag, demonstrates a profound ignorance of history. Imagine for a moment what the people killed in anti-colonial fights across the globe would think if they saw this wholesale embrace of their tormentors.

This is where the contrast between flags must be emphasized. Blind worship of any national symbol is dangerous, but the Chinese flag stands for very different principles than the British or US ones. The People’s Republic of China flag represents liberation and an end to exploitation, and was only raised after years of bloodshed and revolutionary struggle. That success was the culmination of a century of resistance to imperialism, feudalism and colonialism. Countless lives were lost in pursuit of this noble goal, and those martyrs live on in the flag’s red fabric, as do the many others who have stood against oppression all over the world. The Chinese people are well aware of this, and treat their flag with care and pride.

But that shouldn’t be conflated with the callous jingoism of “former” colonial powers. Victory in a war of liberation and ruthless imperial conquest are polar opposites — the former should be a source of strength and motivation in the face of adversity, the latter should be regarded with the deepest shame. I myself recall my childhood in Texas, where the flag of the US was invoked to justify unilateral action against countless countries and the massacring of millions. The stars and stripes are used as a cudgel against minority groups to this day, and a “love it or leave it” attitude is deployed against any critics of the country’s record of bigotry and genocide.

So, I followed that advice. I left, in part because of the empty patriotism associated with the US flag. Now my stomach turns when I see it flown alongside calls to “liberate” Hong Kong — do they want the “liberation” Iraq, Afghanistan, Libya, Honduras and Haiti got? — so, I can’t imagine how Chinese people must feel seeing it only a few years after the city’s long-delayed return.

Not all flags are created equal. There’s a reason the flag of Nazi Germany is only flown by the most hateful people on the planet; that symbol has been rightfully shunned. Yet, an equally noxious banner gets unfurled by myopic protesters — let’s not forget the millions of Indians killed in the Bengal famine engineered under British rule — and no one bats an eye.

Without a real reckoning with the past, this kind of ignorant spectacle is doomed to repeat itself. I can’t be the only one who wants the sad, sordid cycle to end once and for all.

The author is a copy editor at China Daily.