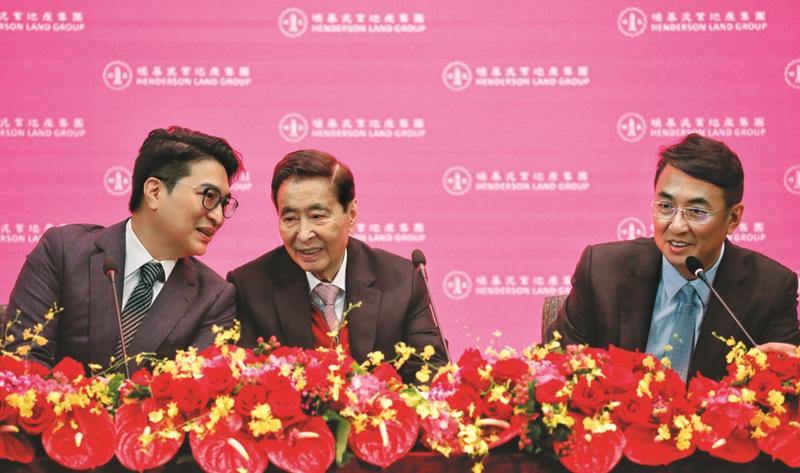 Lee Shau­-kee — Hong Kong’s second­richest man — has stepped down as chairman of one of the world’s most successful property conglomerates, Henderson Land Development, which he had helmed for more than four decades.

The 91-year-­old magnate announced his retirement ahead of the group’s annual general meeting on Tuesday, joining the ranks of the city’s group of aging tycoons, including Hong Kong’s wealthiest man Li Ka-­shing, in passing the baton to the next generation.

My father has taught us plenty of business skills, and one of them is how to use leverage in business dealings

ALSO READ: Billionaire Lee on Hong Kong's youth to property and his legacy

Lee, affectionately known as “Uncle Four” and with an estimated fortune of US$30 billion, will remain as an executive director of the company he founded 46 years ago. His sons, Peter Lee Ka-­kit and Martin Lee Ka­shing,  will take over as co­chairmen and oversee the group’s businesses on the Chinese mainland and in Hong Kong, respectively.

The elder Lee revealed his imminent retirement in March this year due to his advanced age, following in the footsteps of property baron Li Ka­shing, who retired last year and handed the reins to his eldest son, Victor Li Tzar­kuoi, to take charge of the family businesses.

Another prominent local tycoon, banker David Li Kwok­po, stepped down last week after 38 years as chief executive officer of the Bank of East Asia — the longest tenure so far at a major Hong Kong­listed company. His two sons, Adrian Li and Brian Li, will become the bank’s co­chief executives from July 1.

At Henderson Land’s annual meeting on Tuesday, Peter Lee and Martin Lee, as well as the group’s deputy chairman Lam Ko­yin, took questions from the media on behalf of the property mogul due to his sore throat.

“In retirement, my father will have more time with his grandchildren. My father has taught us plenty of business skills, and one of them is how to use leverage in business dealings,” said Martin Lee.

Widely known as “Uncle Four” as he’s the fourth child in his family, Lee Shau­-kee is part of a generation of Chinese mainland tycoons who immigrated to Hong Kong in the mid­-20th century during a period of turmoil on the mainland. He then built up companies that have grown to dominate the local business scene.

The elder Lee started his career in currency and gold trading before moving into property. In 1958, along with seven partners, including prominent businessmen Kwok Tak-­seng and Fung King­hey, Lee created a real-estate business. Five years later, he founded Sun Hung Kai Properties — now the city’s biggest developer — with Kwok and Fung, but left the company in 1973 to launch Henderson Land Development.

“Martin and I know the company’s operations very well, and have a good division of work among us,” Peter Lee said at the annual meeting. “At the moment, we don’t have any new business plan.”

“Mainland enterprises are expanding their presence in the city, creating a huge demand for office properties. As for the residential market, the ultra­long decades of low interest rates should support local home prices, which will remain stable with little room for a downward correction,” said Martin Lee.

Local property prices are near record highs, having risen for the past three months. The rebound, fueled by low interest rates and the perennial shortage of housing, made a sudden slide late last year look like a temporary blip in the relentless increase in property values.

“The tax system is simple and the tax rate is attractive. The comprehensive legal system and the cluster of  talents  enable  Hong Kong to maintain its status as an international financial center,” he said.

“When I was young, I experienced the period of war and turmoil. Life was very hard back then, but I survived through the adversity and continued to build my career. Comparatively speaking, Hong Kong is already a paradise. I really do not fear or worry,” the property mogul said.

Daiwa Capital Markets has given Henderson Land a “buy” rating with a target share price of HK$57.73.

‘We believe there’re factors driving further improvement in the sector’s valuation, especially for  those  that  can  modernize their  capital management. Hence, although property stocks have had a good run, we think share prices have yet  to peak, unlike some,”  said Jonas Kan Kwok­yu, head of Hong Kong research and head of Hong Kong/ China property research at Daiwa Capital Markets.

Henderson Land’s share price closed at HK$49.15 on Tuesday — up 0.51 percent from the previous day.

Bloomberg contributed to the story.