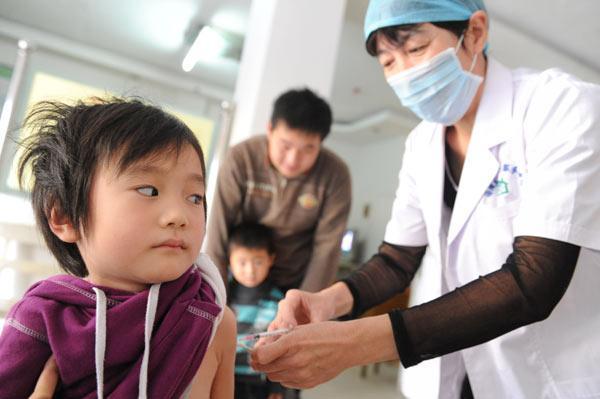 This undated photo shows a child receiving a measles vaccine from a doctor at Bozhou, Anhui province. (ZHANG YANLIN /FOR CHINA DAILY)

BEIJING - The Chinese government Friday published a white paper on public health, stressing that health is a precondition for the survival of humanity and the development of human society.

The white paper, released by the State Council Information Office, introduced facts about the development of public health as an essential element of human rights in China.

The right to health is a basic human right rich in connotations. It is the guarantee for a life with dignity, according to the white paper.

Everyone is entitled to the highest standard of health, equally available and accessible, according to the white paper, titled "Development of China's Public Health as an Essential Element of Human Rights.

The coverage of basic public health services in China and the scope of beneficiaries has been expanded, according to a white paper

The government has extended free vaccinations from children only to adults and expanded basic public health services to 12 categories that span a person's life circle, including citizens' health archives and management, it said.

The ability to quickly respond to public health emergencies has been strengthened in a comprehensive way, with the legal system for emergency response taking initial shape and the response mechanism optimized, said the paper.

China has been vigorously improving its national medical security system, and the country has preliminarily realized basic health care for every citizen, according to the white paper.

According to the white paper, China invested 42 billion yuan from 2011 to 2015 to support the building of 1,500 county-level hospitals, 18,000 town and township health centers, and more than 100,000 village clinics and community health centers.

China has also built a medical education system of the largest scale in the world, with a total number of 3.95 million students studying at 922 medical colleges and universities, and 1,564 secondary schools with medical courses, by the end of 2016, it said.

The Chinese government has also increased its support for traditional Chinese medicine (TCM), investing a special fund of 4.6 billion yuan to support the capacity building of TCM from 2013 to 2015, according to the paper.

The government has also attached great importance to the protection of the right to health of special groups such as women, children, the elderly and the disabled, according to the white paper.

In 2016, infant mortality was 7.5 per thousand and that of children under five was 10.2 per thousand, both meeting the targets set in the UN Sustainable Development Goals and the Program for the Development of Chinese Children (2011-2020) ahead of schedule.