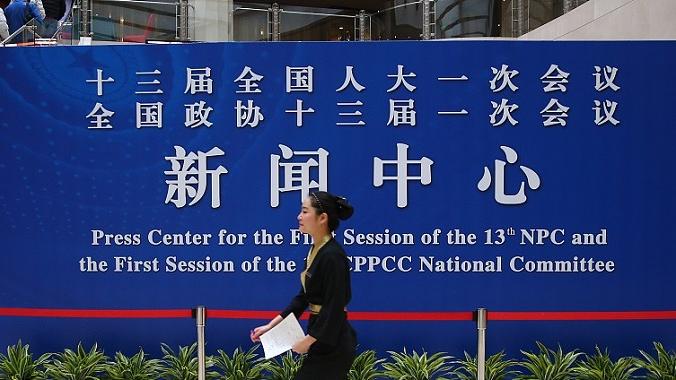 The media center for the upcoming annual sessions of the national legislature and top political advisory body opened on Tuesday to reporters from home and abroad.

For the first time, reporters will have a chance to interview NPC deputies along a newly planned "deputies' passage" in the Great Hall of the People, similar to the "ministers' passage" at previous sessions, said He Shaoren, director of the media center.

The "ministers' passage", also known as "the ministers' red carpet", is the 100-meter passage near the northern gate of the Great Hall of the People through which ministers and other high-ranking officials must walk through before entering the meeting hall. During the two sessions, the corridor is usually crowded with reporters trying to raise questions to ministers and glean information from their quick responses.

This year, many NPC deputies will be invited to take media questions in a similar fashion so the session will be more open, He said.

There also will be a series of news conferences during the upcoming two sessions, such as on China's foreign policy, reform and development and fiscal policy, he said.

The media center, at Beijing's Media Center Hotel, has set up a main news conference hall, interview rooms, receptions for journalists from the Chinese mainland, Hong Kong, Macao and Taiwan and foreign journalists.

The official website of the center provides information from the sessions and interviews. Reporters also can use its public computer ports and free Wi-Fi and have access to free drinks and snacks.

READ MORE: Anti-graft system up for major changes in measures before NPC

Zhou Wen, a reporter at China Women's News, said it is convenient to write and send out her stories with the facilities at the media center.

"The computers and internet here are quite handy. But I wish there would be more information about the delegations, NPC deputies and CPPCC (National Committee) members once the two sessions start," she said.