Distorted media coverage of violence must be addressed

I have just returned from Kuala Lumpur after attending the Malaysian National Anti-Corruption Forum as a guest speaker. As expected, I was asked about the current crisis in Hong Kong. The Malaysians have always had great admiration for the success of the Independent Commission Against Corruption in keeping Hong Kong one of the most corruption-free cities in the world. This was why they were particularly baffled about how our modern city with a supposedly efficient government could have allowed rioters to run amok almost on a daily basis for nearly three months, attacking police stations and government buildings and wrecking our world-class transportation infrastructure.

It’s not really that hard to fathom the reasons behind this aberration when one looks behind the scenes. First of all, contrary to what you read in the media, our police generally continue to treat these anarchists with kid gloves by chasing them away most of the time and only arresting just a handful of them despite hundreds of them being actively involved in causing indiscriminate destruction. And those violent protesters arrested are not deterred because they were soon on the streets again after being charged in court, ordered to observe a curfew and then released on bail!

What is worse is the rioters were aided and abetted by certain reporters whose professional accreditation is questionable, to say the least, according to some veteran reporters who covered the outbreak of violence and who are worried about their own professionalism and ethical standards being called into question.

Some media industry insiders have revealed that since the outbreak of the street violence, there has been a substantial upsurge in the application for press accreditation, and the Hong Kong Journalists Association simply granted these press permits for a mere HK$200 (US$26) fee without undertaking the usual due diligence to check their authenticity. The rude behavior of some “reporters” at the police press conferences only increases a general suspicion that some of them are not legitimate professional journalists. What is even more alarming is that the conduct of some of these newly accredited “reporters” regularly violates the first rule of media coverage — to be at the scene as an objective observer, never attempt to influence the event and to produce accurate and balanced reports afterward. It’s clear that some of them have failed on all counts, with the public being fed biased and even false reports designed to elicit sympathy for the rioters and vilify the police officers who were duty-bound to chase and subdue them. 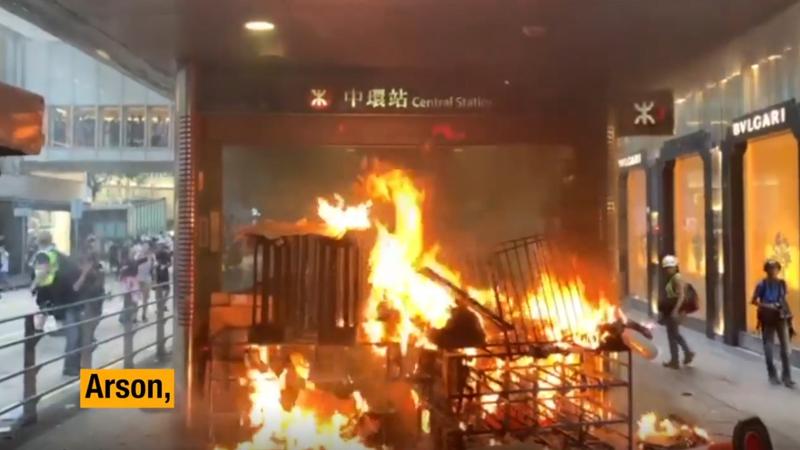 I suggest the police must launch a dedicated website detailing all riots and illegal assemblies over the last three months. The police should emphasize that for each and every illegal assembly and for criminal damage, a separate investigation file is opened to pursue the offenders to the end

On a number of occasions, these questionably accredited “reporters” would shout to the subdued protester for his identity in order to alert the rioters’ legal team to follow up and to alert his family to be prepared for the police searching his home. If that is the case, these so-called reporters have actually committed offenses by perverting the course of justice. Their proximity to the riot police clearly also hampers their operations to some extent. Often, they position themselves right in front of the riot police, which slows the police down when they take action. There clearly has to be more stringent controls of the press at the scene.

It is easy to demonize the police, especially when people see tear gas and smoke billowing in the air. But based on my international experience and liaisons with overseas law enforcement agencies, I know that smoke grenades and tear gas, along with beanbags and rubber bullets, are among the most humane instruments in crowd control because they minimize direct human contact. Contrast that with the thousands of bricks, metal balls and gasoline bombs thrown by the rioters at the police line, which potentially are far more lethal than the weapons used by riot police. Besides, if the rioters are injured, they have only themselves to blame for not heeding repeated police warnings to disperse. But unfortunately, the use of tear gas does create a false image of a war zone. Add to that the electronic media’s tendency to film at close range the moment the violent protester is subdued by riot police, and the demonization of the police is complete! Indeed, unless you are fully aware of the actual situation before police take enforcement action, you can be easily misled into thinking that the rioter is the victim, while the law enforcer is practicing “police brutality”!

With that in mind, I have come to the conclusion that we can no longer leave it entirely to the media (as most tend toward sensational reporting) to provide a fair and accurate account of these frequent violent encounters between protesters and riot police. And that is why I suggest the police must launch a dedicated website detailing all riots and illegal assemblies over the last three months. The police should emphasize that for each and every illegal assembly and for criminal damage, a separate investigation file is opened to pursue the offenders to the end. This website would enable the international community to see for itself the extent and viciousness of the actions taken by the rioters, including the number of Molotov cocktails, countless bricks, steel bars, and sharpened poles they use to attack the officers during their so-called “peaceful” protest marches. It should also catalogue the 1,000-plus arrests made so far, their personal details, the charges leveled against them and the range of punishments that are in store for them. The website would not only help create a more accurate and positive image of our police officers, but could also serve as a deterrence for people contemplating taking part in violent protests.

The website can also help with police investigations. Just like the FBI Ten Most Wanted Fugitives list, it should publish a “Most Wanted Rioters” page carrying pictures of those leading rioters yet to be fully identified due to their wearing of the full face mask at the scene, along with monetary rewards for information leading to their capture.

What I found most puzzling is the media’s glossing over the substantial economic damage these violent protesters caused to our infrastructure and that there was no call for compensation. Let’s not forget they are destroying property paid for by the taxpayers. Shouldn’t those who cause the damage be made to pay for it?

The government should consider setting up a “Central Damage and Compensation Fund”. Let all the damage done to public property be accounted for in this fund. In addition, all victims of the rioters’ campaign of destruction, including the Legislative Council, MTR, shops and private individuals whose cars were smashed by rioters over some verbal altercation, can all apply to this fund for compensation. The government could regularly update the figure. This would ensure the public is fully aware of the extent of damage caused by the rioters and that we, as taxpayers, are currently made to foot the bill, unless LegCo, in all its wisdom, will see to it that this gross injustice is quickly remedied!

The author is an adjunct professor of HKU Space and council member of the Chinese Society on Hong Kong and Macao Studies and an international anti-corruption consultant.