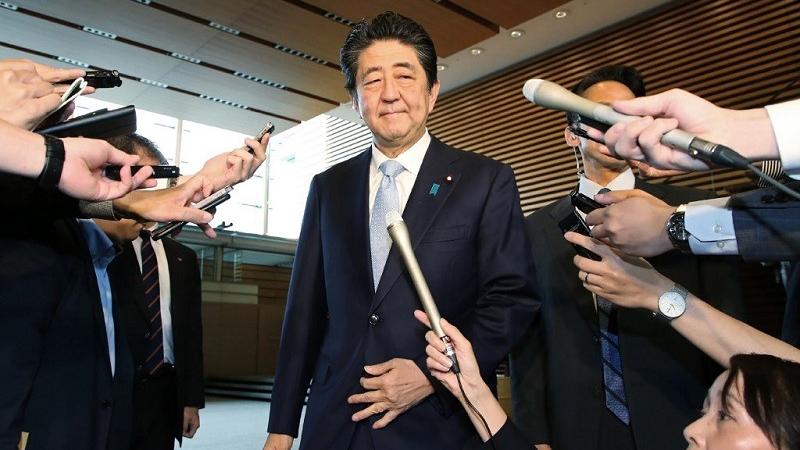 Japanese Prime Minister Shinzo Abe (center) holds a Q and A session with reporters at his official residence in Tokyo on July 1, 2019. (JIJI PRESS / AFP)

TOKYO - Japanese Prime Minister Shinzo Abe's coalition is on track to win a solid majority in a July 21 upper house election, and his dream of revising the pacifist constitution could still be alive if enough allies also win, a survey showed on Saturday.

Abe's Liberal Democratic Party (LDP) and its coalition partner Komeito are expected to win more than 63 seats, a majority of the 124 seats contested, the poll taken by the Kyodo news agency on Thursday and Friday showed. They could win as many as 77 seats, it said.

ALSO READ: What to watch in a Japanese election that will shape Abe's legacy

Abe is highlighting his call to revise the post-war constitution to further legitimise Japan's Self-Defense Forces, as its military is known

Other surveys, including those taken by the Asahi and Sankei newspapers, also showed Abe's coalition parties with a good chance of winning a majority of the seats up for re-election.

However, many voters are still undecided and the outcome could change.

Upper house elections are held every three years, with members' terms running for six years. The LDP won a landslide victory in 2013 but fared less well in 2016.

Reforms last year increased the number of seats in the upper house by three to 245.

Attention will also focus on whether the ruling bloc, along with the smaller Japan Innovation Party and independents, retain a two-thirds "super majority" needed to revise the post-war pacifist constitution, a long-held goal for Abe.

Abe is highlighting his call to revise the post-war constitution to further legitimise Japan's Self-Defense Forces, as its military is known.

Media reports said pro-revision forces needed to win 85 of the seats being contested to have a two-thirds majority.

A constitutional revision requires approval by two thirds of both chambers of parliament and a majority in a public referendum.