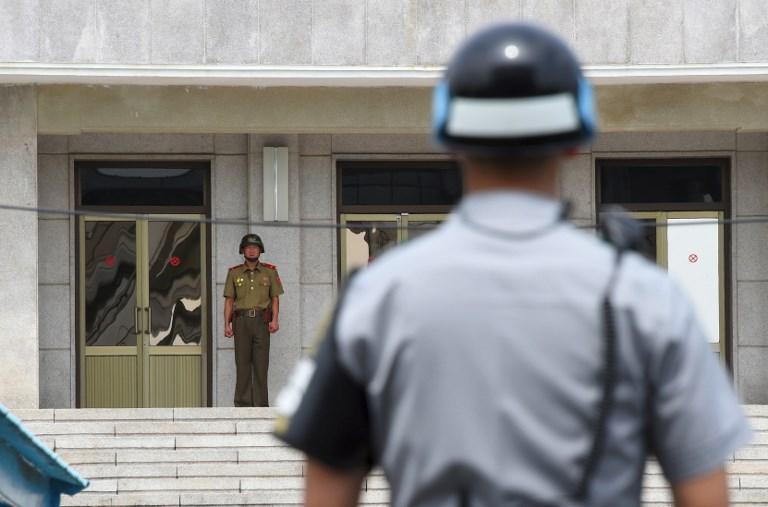 A DPRK soldier (left) looks at the south side as an ROK soldier stands guard during a press tour to the truce village of Panmunjom in the Demilitarized Zone dividing ROK and DPRK on July 19, 2017. (JUNG Yeon-Je / AFP)

SEOUL - The Republic of Korea's (ROK) proposed military talks aimed at easing tension between the two Koreas planned for Friday failed to happen after the Democratic People's Republic of Korea (DPRK) snubbed the call, a setback for new President Moon Jae-in's hopes for dialogue.

Pyongyang has remained silent on Seoul's proposal, made on Monday, for talks on ways to avoid hostilities along their heavily fortified border

Pyongyang has remained silent on Seoul's proposal, made on Monday, for talks on ways to avoid hostilities along their heavily fortified border.

Moon took office in May pledging to engage DPRK in dialogue, as well as to bring pressure on it to impede its nuclear and missile programmes.

The proposal for talks came after the North said it conducted its first test of an intercontinental ballistic missile on July 4, and said it had mastered the technology to mount a nuclear warhead on it.

ROK defence ministry spokesman Moon Sang-gyun told a briefing the military talks proposed for Friday were practically impossible as DPRK had not responded.

"It is an urgent needed task for peace and stability on the Korean peninsula to restore dialogue in the military area and to ease military tension between the South and the North," he said. ROK is also referred to as the South and DPRK as the North.

Moon said the proposal for talks still stood and he urged DPRK to respond.

It was the first formal overture by ROK since cross-border ties broke down early last year under the government of Moon's predecessor, who imposed unilateral sanctions on DPRK for its nuclear tests and missile launches.

DPRK has conducted its fourth and fifth nuclear tests and a quick succession of missile-related activities since the beginning of 2016, after leader Kim Jong-un had pledged to improve ties with the South in a New Year's address.

ROK had proposed talks to discuss ways to end activities on the border that have fuelled tension.

By that, ROK usually refers to loudspeaker propaganda broadcasts by both sides, while DPRK wants an end to joint US-ROK military exercises.