Focus on health the right prescription 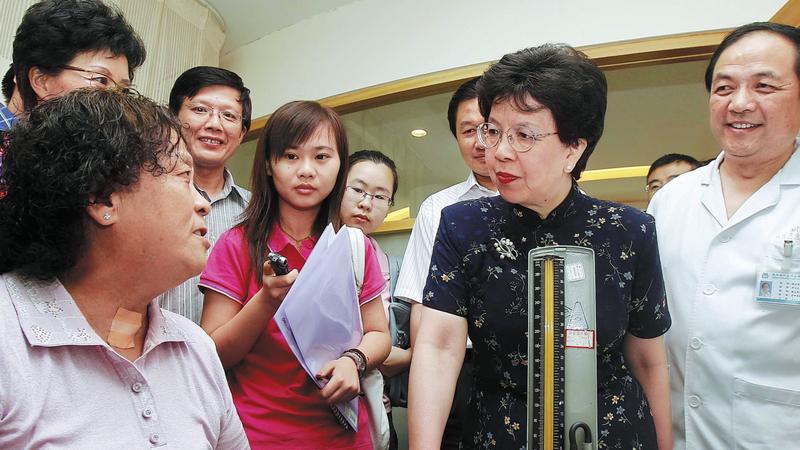 The Hong Kong-born physician said the key to China's achievements in the past four decades lies in its government's commitment to focusing on people's needs while seeking the nation's development.

"Prosperity for all is impossible without health for all," she said. "In the past 40 years, China has always put the people's health at the top of its policy agenda, working hard to improve the people's health and fitness, and making universal health a primary goal of development."

China has always been generous in sharing with the rest of the world its lessons in developing its healthcare system, not only just by telling people its experience, but also by bringing the help to the places in need

Chan became one of China's most high-profile UN officeholders when she headed the WHO for a decade from 2007.

Her lifetime career in health began 29 years earlier, in 1978, when China embarked on reform and opening-up.

"The year (1978) is important for me because it marked three meaningful things: my graduation from university; the beginning of China's reform and opening-up; and the recognition of China's promotion of health for all from the WHO," she said.

After Chan obtained her medical degree from the University of Western Ontario in Canada, she joined the Hong Kong Department of Health as a medical officer in 1978.

As a civil servant in Hong Kong under the British administration, Chan said she did not have many chances to travel to the Chinese mainland. But in an occasional meeting with Halfdan Mahler, then WHO director-general, she noticed that China was undergoing an "extraordinary health movement" at that time.

"I remember Mahler had praised the mode of 'barefoot doctors', and said it was an attempt that can be promoted to more developing countries in the world," she said.

When the People's Republic of China was founded in 1949, it had a weak medical and healthcare system due to low levels of economic and social development. Chinese people, mostly living in rural areas, lacked basic medical insurance and knowledge.

In 1951, the government declared that "basic healthcare should be provided by health workers and epidemic prevention staff in villages". The country later started a program to train villagers to provide basic medical care to fellow villagers, at home and at work. By the 1960s, more than 200,000 village doctors had been trained across China.

That inspired Mahler, and in 1978, at a WHO conference in what is now Kazakhstan, he proposed calling on local communities to help decide healthcare priorities, an emphasis on primary and preventive healthcare, and seeking to link medicine with trade, economics and other political and social areas.

"In 1978, the Chinese barefoot doctor approach for training locals in basic healthcare inspired the primary healthcare movement launched by the Declaration of Alma-Ata, which became the brand name for much of the WHO's work," Chan said.

Since adopting its reform and opening-up policy in 1978, China has made tremendous achievements in the medical and healthcare sector, improving the health of one-fifth of the world's population.

"It is no longer the 'sick man of East Asia'," Chan said. "China was later gradually developed into a healthy country and 'a role model for developing countries', which is recognized by the WHO."

She said the most remarkable development has been the wide coverage of medical insurance.

China embarked on the biggest health system reform the world has ever seen in 2009, aiming to extend medical services beyond the country's prosperous urban centers.

At the start of the century, less than a third of China's population had access to health insurance. Now nearly 100 percent do. A basic medical services network, covering both urban and rural areas, has been put in place, with 980,000 medical and health institutions at all levels, 11 million health workers, and 7 million beds at medical institutions.

Praising China for giving its huge population a safety net that protects people from being impoverished by the costs of healthcare, Chan said it was a tremendous contribution to a fair and prosperous society.

"These main health indicators of the Chinese are generally better than the average level of middle- and high-income countries, and China has achieved the UN's Millennium Goals in this regard ahead of schedule," Chan said.

The results are also gains from the pain of an epidemic outbreak 15 years ago, she said.

In 2003, severe acute respiratory syndrome, or SARS, spread worldwide after first appearing in southern China's Guangdong province. It was carried to Hong Kong by an infected doctor, sparking a global outbreak that struck down more than 8,000 people and left more than 800 dead in 32 countries.

During the outbreak, Chan, then Hong Kong's director of health, became the face of the global response.

"In 2003, when China suffered from SARS, it had less experience in dealing with such a crisis," she said.

"And for whatever reason, China was criticized by the world. But since 2003, China has improved and invested in its healthcare system and the information system in reporting to the WHO and being very transparent. China is one of the best countries in terms of preventing and containing infectious diseases now."

Learning a lesson from SARS, the Chinese government took comprehensive measures to improve public health services, and the prevention and control of serious diseases. It built the world's largest real-time electronic disease surveillance system to monitor and prevent epidemic emergencies.

"In fact, the system not only deals with disease outbreaks, but also has the capability to deal with other disasters like flooding, earthquake or chemical explosions," Chan said. "This is a model of immediate, transparent, and complete reporting of a country's emergencies."

In many ways, SARS was a game-changer, not only for the international community and its approach to epidemic diseases, but also for the positive impact it had on health in China and the era of openness and transparency it helped usher in.

After the crisis, Chan went on to be elected WHO director-general, leading 194 member states facing everyday challenges from all kinds of disease.

A decade after SARS, another deadly epidemic - Ebola - swept across West Africa in 2014.

Chan said it was one of the most difficult moments for the WHO, which was criticized for being slow in the beginning but rapidly adjusted.

"This time, China was a great helper," she said.

Chan said that as a responsible, big country, China used its capacities and experience to help fight Ebola and, with its help, the WHO was able to offer assistance and eventually help create the first Ebola vaccine.

Chan said courageous Chinese medical teams were among the first to answer her call for hands-on clinical support in very dangerous conditions.

China offered aid worth 750 million yuan (US$113.77 million) and sent thousands of medical personnel to Ebola-hit countries including Guinea, Liberia and Sierra Leone in 2014.

It built on a tradition of Chinese medical help to Africa going back decades.

In 1963, the presence of Chinese medical teams in Africa was a key part of a signature international health outreach program that eventually included the construction and donation of hundreds of hospitals and clinics that now dot sub-Saharan Africa.

"China has always been generous in sharing with the rest of the world its lessons in developing its healthcare system, not only just by telling people its experience, but also by bringing the help to the places in need," Chan said.

At the UN General Assembly in 2015, President Xi Jinping announced the creation of a US$2 billion fund, which will be raised to US$12 billion by 2030, to support least-developed countries and launch 600 specific projects to cut poverty, improve education, and support better healthcare.

At the 19th National Congress of the Communist Party of China in October 2017, Xi also emphasized making efforts to ensure that all Chinese people can enjoy happier, safer and healthier lives, Chan said.

"This is an exceptional formal recognition of the political power of health, and bodes well for China's leadership, at home and abroad," she said.

"China is extremely fortunate to have leadership that has made health the center of all government policies. All policies made in all government sectors need to include a health impact assessment."

Chan said that enabled China to ensure that the consequences of its rapid modernization and economic progress made people healthier, not sicker.

Chan, 71, still wants to share China's experience in health promotion and her own. She is now a member of the council of advisers of the Boao Forum for Asia, and is busy preparing for the first Global Health Forum this year.

"In a world facing considerable uncertainty, international health development is a unifying and uplifting force for the good of all humanity," she said.

Chan said that as China develops its Belt and Road Initiative, "I suggest many countries keep in mind the many economic and trade-related factors that can so quickly undo decades of steady progress in improving health. Acknowledging and addressing these factors is another way to promote peace and cooperation, openness and inclusiveness, mutual learning and mutual benefit."

Chan was given a new role last year as a member of the National Committee of the Chinese People's Political Consultative Conference, the country's top political advisory body.

"As a new member, I have to listen and learn," she said. "There is so much to learn about playing the role of a CPPCC member."

She said her role has transformed to serving China.

"As former director-general of the WHO, I was an international servant, and I did not wear my nationality on my sleeve," Chan said. "It has been a great honor to serve the WHO, but without my motherland's support, I wouldn't have the opportunity to do so." 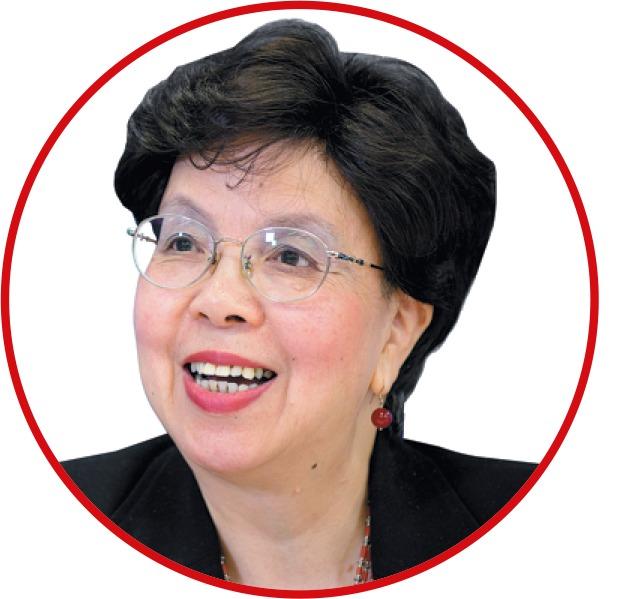 2005-06: Assistant director-general for communicable diseases, WHO

2018-present: Member of the National Committee of the Chinese People's Political Consultative Conference