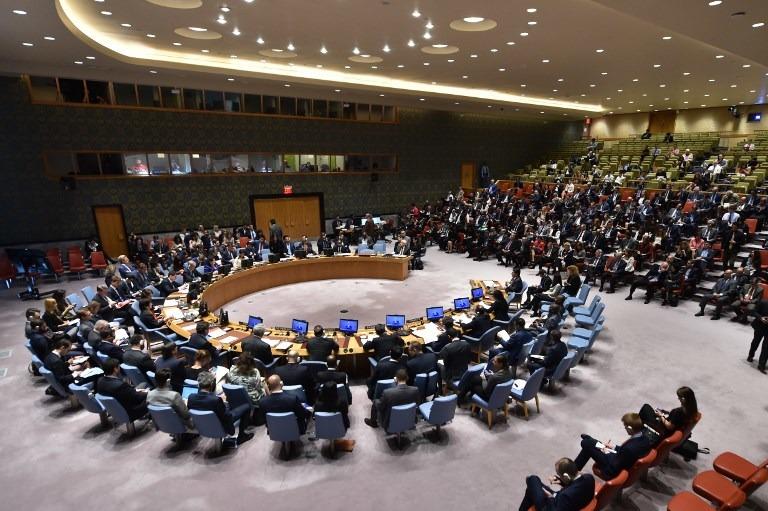 The UN Security Council gathers during a meeting on May 15, 2018, at UN Headquarters in New York. The Security Council adopted new guidelines on Aug 6, 2018, to try to speed the delivery of humanitarian aid to the Democratic People's Republic of Korea. (HECTOR RETAMAL / AFP)

UNITED NATIONS — The UN Security Council adopted new guidelines Monday to try to speed the delivery of humanitarian aid to the Democratic People's Republic of Korea (DPRK), where the UN says around 10 million people need food and other assistance and about 20 percent of children are stunted because of malnutrition.

The Netherlands, which chairs the Security Council committee monitoring sanctions against the DPRK, said none of the 15 council members objected to the proposed guidelines by the deadline on Monday afternoon. The guidelines will now be sent to all 193 UN member states.

Tough UN sanctions imposed on the DPRK in response to its escalating nuclear and ballistic missile programs exempt delivery of humanitarian aid.

But UN humanitarian chief Mark Lowcock told UN members following his trip to the DPRK last month that one effect of sanctions has been "quite substantial delays" in procurement, shipping and delivery of aid supplies which are exempt from sanctions.

With a population of about 25 million, the DPRK faces chronic food woes as well as shortages of drugs and medical equipment, including that needed to treat tuberculosis, which has plagued the country.

The guidelines recommend that governments and NGOs submit requests for exemptions in a letter containing 10 specific elements.

Those range from providing detailed descriptions and quantities of the items to be imported, to naming all parties involved in the transfer of goods and showing what measures ensure that the aid is "used for the intended purposes and not diverted for prohibited purposes."

They say the sanctions committee will try to process exemption requests as quickly as possible.

"We are glad that the Security Council agreed on the guidelines, and we hope they provide clarity on delivering humanitarian aid to the North Korean people without violating the sanctions," the Netherlands' deputy ambassador, Lise Gregoire-van Haaren said. "Our ultimate goal is the denuclearization of the Korean Peninsula, and the sanctions are very important to that end."

The United States' effort to try to ensure that humanitarian aid doesn't face unnecessary obstacles in getting to DPRK follows the June summit between US President Donald Trump and DPRK leader Kim Jong-un aimed at getting DPRK to give up its nuclear arsenal.

A US official stressed last week that the United States will enforce all UN sanctions on DPRK "until we achieve the final, fully verified, denuclearization of North Korea."

The guidelines are "solely intended" to establish a clear process for the Security Council sanctions committee "to review legitimate humanitarian exemption requests and guard against any activities that would undermine existing Security Council resolutions," said the official, who wasn't authorized to speak publicly.