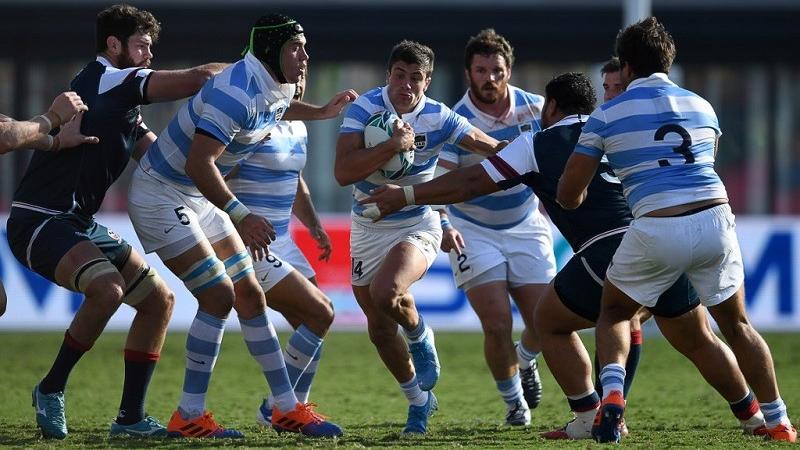 Argentina's wing Bautista Delguy (center) runs with the ball during the Japan 2019 Rugby World Cup Pool C match between Argentina and the United States at the Kumagaya Rugby Stadium in Kumagaya on Oct 9, 2019. (CHARLY TRIBALLEAU / AFP)

TOKYO - Fans at the Rugby World Cup were treated to plenty of tries across the three games held here on Wednesday. In the early kick-off, Argentina eased past the United States 47-17, while Scotland steamrolled Russia 61-0. In the final game of the day, Wales overcame an early scare to defeat Fiji 29-17 to all but secure their position at the top of Pool D.

The Wales-Fiji game was a feast of high quality attacking rugby from both sides. Fiji, who had no chance of reaching the quarterfinals after a narrow loss to Australia and a disappointing defeat to minnows Uruguay, came quickly out of the blocks, scoring two early tries to take an early lead.

However, Wales soon got on the board through a try from Josh Adams, who would go on to score two more tries to complete his hat-trick. Wales would continue to score at regular intervals to keep up their intensity against a hard-hitting Fiji attack and defense.

Despite Fiji falling behind 14-10 at the break, a penalty try 13 minutes into the second half put them back ahead.

As the game moved on, the superior fitness of the Welsh players proved to be the turning point. Wales scored their final two tries in the closing 20 minutes to put the result beyond doubt and win their third successive match.

Scotland's prop Willem Nel (2L) runs with the ball during the Japan 2019 Rugby World Cup Pool A match between Scotland and Russia at the Shizuoka Stadium Ecopa in Shizuoka on Oct 9, 2019. (ANNE-CHRISTINE POUJOULAT / AFP)

Elsewhere, Scotland were too good for a Russia side that had traveled to Japan as arguably the weakest in the tournament. Ahead of their crunch match against Japan on Saturday, Scotland looked to make a statement of intent, and achieved what they were looking for with a resounding 61-0 win.

Sharp, attacking rugby stretched a ragged Russian side that was exhausted after 80 minutes of constant defense.

59 percent possession and 65 percent territory told the full story of the game. Precise kicking from Scotland fly-half Adam Hastings kept Russia pegged in their own half and left them struggling to get a foothold in the game.

From one to 15, Scotland outplayed Russia in every aspect. However, it was scrum-half George Horne who stood out, as he bagged himself a hat-trick through his constant sniping at the edge of the rucks and his intelligent support play.

In the day's early kick-off, Argentina put their disappointing display against England behind them to defeat the USA. 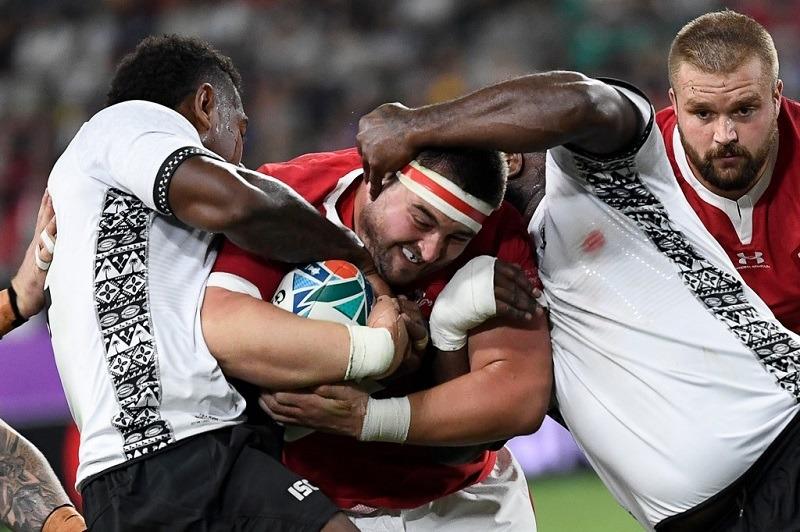 Once again, the USA defense struggled to cope with the Argentina three-quarters Jeronimo de la Fuente and Juan Cruz Mallia, who found themselves in space time and again and punished the USA accordingly. Both players scored two tries each, as well as setting up their teammates as they made clean line breaks at will through the lackluster USA centers' defense.

READ MORE: Canada and US last teams to get underway in Rugby World Cup

However, the USA did have opportunities during the game. Scoring three tries, they could have notched even more were it not for the litany of handling errors and penalties at the scrum that stymied their progress.

Despite being on the wrong side of final scores against England, France and now Argentina, the USA has the opportunity to make amends against Tonga in their final World Cup game.