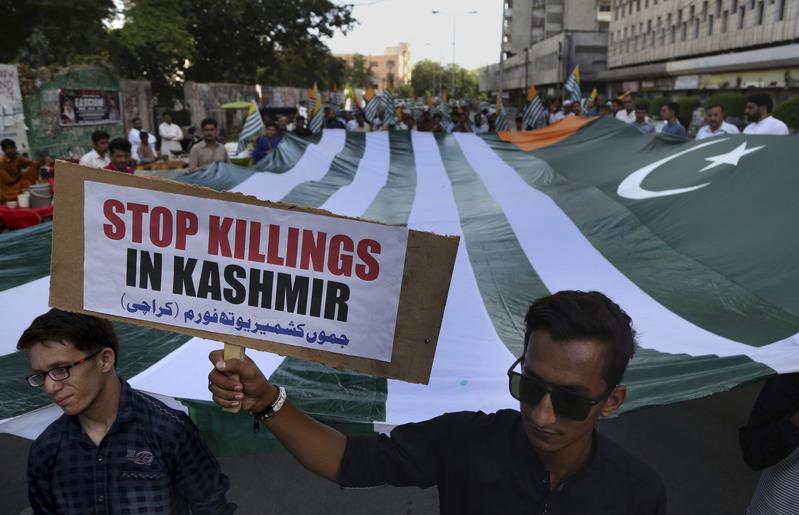 Supporters of Jammu Kashmir Youth Forum hold a huge Kashmiri flag during a demonstration to condemn India and its decisions on Kashmir, in Karachi, Pakistan, Aug 18, 2019. (FAREED KHAN / AP)

SRINAGAR, India — Pakistan said Indian troops fired across the Line of Control in the disputed Kashmir region, killing two civilians and wounding another, as some security restrictions were lifted Monday in the main city of Srinagar.

Pakistan and India often exchange fire in the Himalayan region, but tensions have increased since Aug 5, when New Delhi changed the status of Indian-administered Kashmir, which is split between the nuclear-armed rivals and claimed by both.

Restrictions were eased in parts of Srinagar, where schools for students from preschool to fifth grade were set to reopen after a two-week security lockdown.

But six grade schools in the city were found closed on Monday morning, with no school administrators or students in sight.

"Why would I risk sending my kids to school when the government is uncertain about the security situation?" said Srinagar resident Mohammed Latief, whose children are in the first and third grades.

Paramilitary soldiers armed with assault rifles stood guard at checkpoints, allowing a trickle of vehicular and pedestrian traffic to pass. Many shops and offices remained closed.

The security crackdown and a news blackout were imposed following the decision by India's Hindu nationalist-led government to downgrade the Muslim-majority region's autonomy. Authorities started easing restrictions on Saturday.

Hundreds of people were involved in clashes with security forces that erupted in several Srinagar neighborhoods on Sunday.

Pakistan's foreign ministry said in a statement Monday that civilian casualties occurred Sunday because of "unprovoked cease-fire violations" by India in the border villages of Hot Spring and Chirikot. 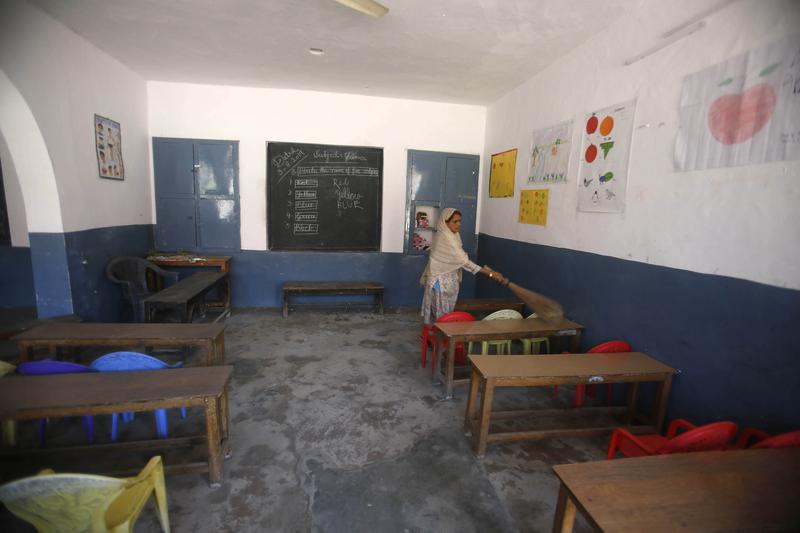 The military said a 75-year-old man and a 61-year-old man were killed. It said in a statement that Pakistani troops returned fire at the Indian posts from which mortar fire and anti-tank guided missiles had originated.

It said two Indian troops were killed, but there was no immediate comment from New Delhi.

Pakistan and India have fought two wars over control of Kashmir since they won independence from British colonialists in 1947.

Talking to journalists late Sunday in the city of Multan, he challenged Indian Prime Minister Narendra Modi to hold a vote to determine whether Indian and Kashmiri people support or reject the changes his government made to Kashmir's status.

India has imposed a security lockdown in the portion of Kashmir it administers to avoid violence in response to the change in the territory's status.

The government has said it is gradually restoring phone lines and easing the lockdown, but changes are slow. Public buses were running in rural areas, but soldiers limited the movement of people on mostly deserted streets in Srinagar.

The Press Trust of India news agency reported that restrictions were reimposed in parts of Srinagar after violence was reported on Saturday.

Amid the rising tensions, authorities in Pakistan issued a flood warning for parts of the eastern town of Kasur after saying India without warning had released water into the River Sutlej and that it could inundate villages in Kasur. The floodwaters are expected to enter Pakistan on Tuesday morning.

The 1960 Indus Water Treaty brokered by the World Bank requires India to share information with Pakistan about rivers flowing to Pakistan.