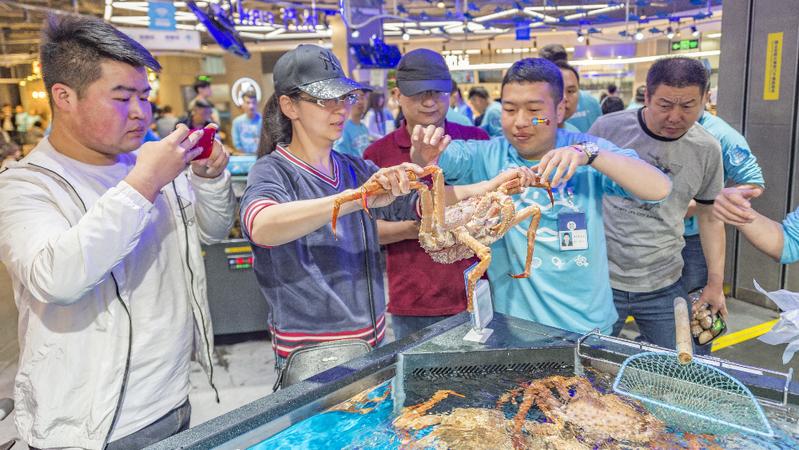 In this undated photo, customers visit a newly opened Hema Fresh store in Xi'an, Shaanxi province, in April, which provides more than 6,000 kinds of products imported from around 100 countries. (PHOTO PROVIDED TO CHINA DAILY)

HANGZHOU – Consumers in Chinese counties are increasingly opting for smart and quality products online as robots and imported goods are gaining popularity, a recent report showed.

The report, jointly conducted by e-commerce giant Alibaba's Taobao village and think tank Aliresearch, showed the consumption trend in the first 11 months of 2018 in the nearly 3,000 county-level administrations in China.

Robot vacuum sales in the top 10 Chinese counties topped 100 million yuan (around US$14.6 million) during the period, while the stir-fry robot has become a popular smart kitchenware genre, according to the report.

Agricultural drones sales online are also noted in counties in the northeast regions, as farmers in the traditional agricultural base modernize their production, according to Aliresearch.

The report also marks the rapid sales growth of imported health, skincare and makeup products in the Chinese counties.

According to the Ministry of Commerce, online retail sales in Chinese villages reached 632.2 billion yuan in the first half of 2018, up by 34.4 percent year on year. The growth is 4.3 percentage points higher than the national average.

According to a Morgan Stanley report, per capita, disposable income for families in China's smaller cities was 55 percent lower than those in top-tier cities a decade ago, while the difference decreased to 45 percent as of 2017 and will likely come down further to 36 percent by 2030.