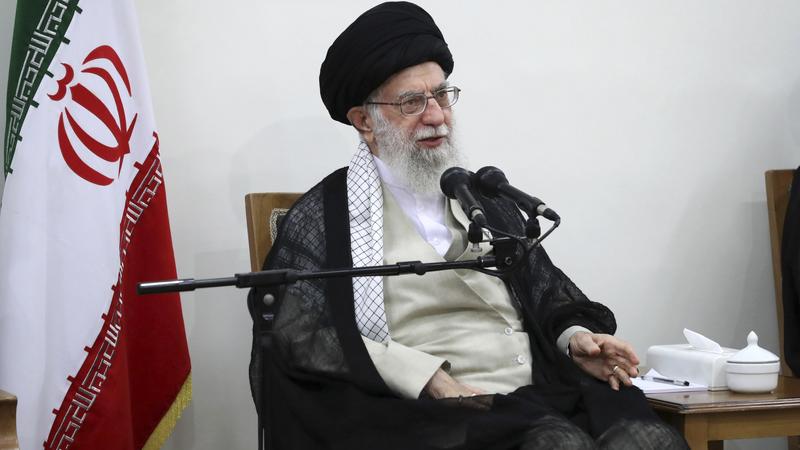 In this picture released June 19, 2019, by the office of the Iranian supreme leader, Supreme Leader Ayatollah Ali Khamenei speaks in a meeting at his residence in Tehran, Iran. (OFFICE OF IRANIAN SUPREME LEADER / AP)

"Holding talks with America can be reviewed by Iran only If (US President Donald) Trump lifts the sanctions and our supreme leader gives permission to hold such talks," Mahmoud Alavi said late on Wednesday.

"Americans were scared of Iran's military power, that is the reason behind their decision to abort the decision to attack Iran."

Trump said last month that he had aborted a military strike to retaliate for Iran’s downing of an unmanned US drone over the Strait of Hormuz on June 20 because it could have killed 150 people, and signaled that he was open to talks with Tehran.

Tehran said the surveillance drone had been shot down by an Iranian surface-to-air missile in Iranian airspace, while Washington said it had been in international airspace.

Tension has spiked between Tehran and Washington since last year, when Trump quit a 2015 nuclear deal between Iran and six powers and reimposed sanctions that had been lifted under the pact in return for Tehran curbing its sensitive nuclear work.

Under the deal, Iran can enrich uranium to 3.67 percent fissile material, well below the 20 percent it was reaching before the deal, and the roughly 90 percent suitable for a nuclear weapon.

"BE CAREFUL WITH THE THREATS"

In reaction to US sanctions, which have notably targeted its main foreign revenue stream in the shape of crude oil exports, Iran said in May that it would scale back its commitments to the deal.

In its first major breach of the nuclear pact, Tehran said on Monday that it had amassed more low-enriched uranium than permitted.

It said on Wednesday that it would boost its uranium enrichment after July 7 to whatever levels it needs beyond the cap set in the agreement. Trump responded: "Be careful with the threats, Iran. They can come back to bite you like nobody has been bitten before."

But in defiance of that warning, Tehran said it would stick to its plan to further scale back its nuclear commitments.

"By exiting the nuclear deal, Trump has wounded the path of diplomacy ... the best antidote to all threats is active resistance," said Keyvan Khosravi, spokesman for Iran's Supreme National Security Council.

The European Union has urged Iran to stick to the terms of the deal, but Tehran has said its commitment will gradually decrease until Britain, France and Germany can ensure that it benefits financially from the accord - Iran's main incentive for signing up to it.

Since May, Washington has ordered all countries to stop purchasing Iranian oil or be banished from the global financial system. It has also dispatched extra troops to the region to counter what it describes as Iranian threats.