Islamic State in Afghanistan aims to attack US, general says 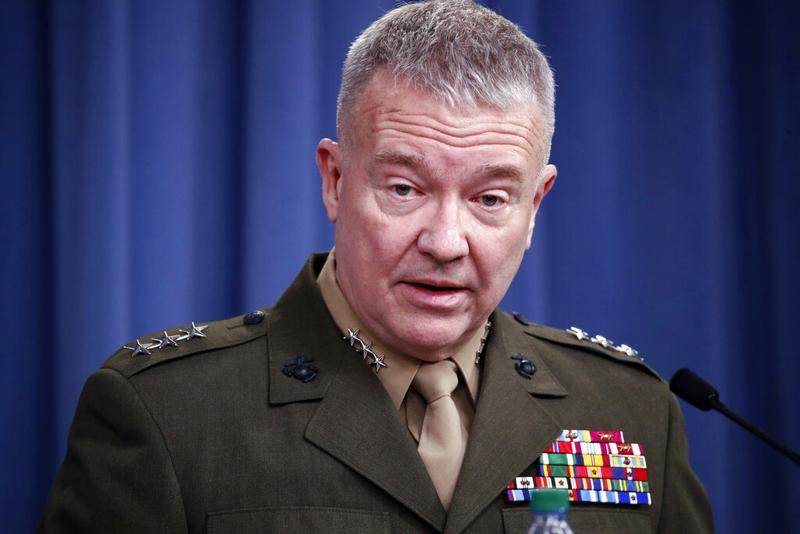 RAMSTEIN AIR BASE, Germany — The Islamic State group in Afghanistan is a "very worrisome" threat to the United States, and US counterterrorism efforts have yet to shrink its extremist ambitions, a senior American general said Wednesday.

Marine Gen Frank McKenzie said IS would be hard pressed, however, to carry out an attack on the US homeland because it is under strong military pressure.

"ISIS in Afghanistan certainly has aspirations to attack the United States," McKenzie said. "It is our clear judgment that as long as we maintain pressure on them it will be hard for them to do that."

McKenzie, a veteran of combat in Afghanistan and Iraq, said he believes IS in Afghanistan has not expanded its capabilities but remains a big problem

McKenzie, head of US Central Command with responsibility for managing American military operations across the greater Middle East, spoke in Germany with reporters returning home with him from an eight-day trip that took him to Qatar, Iraq, Saudi Arabia, the United Arab Emirates and Egypt. He also spent two days aboard the USS Abraham Lincoln aircraft carrier in the North Arabian Sea.

He stopped at Germany's Ramstein air base to refuel his airplane before flying to his headquarters in Florida.

Earlier this week, the Associated Press cited US and Afghan security officials In reporting that the Islamic State group in Afghanistan is expanding its footprint, recruiting new fighters and plotting attacks on the United States and other Western countries.

McKenzie, a veteran of combat in Afghanistan and Iraq, said he believes IS in Afghanistan has not expanded its capabilities but remains a big problem.

"They are very worrisome to us" in their strongholds in eastern Afghanistan, he said, adding that combat operations have failed to reduce the group's fighting ranks. Others have said they are thought to number in the thousands.

The Islamic State affiliate appeared in Afghanistan shortly after the group's core fighters swept across Syria and Iraq in the summer of 2014, carving out a self-styled Islamic empire in both countries. The Afghanistan affiliate refers to itself as the Khorasan Province, a name applied to parts of Afghanistan, Iran and central Asia in the Middle Ages.

US forces in Afghanistan are combatting the Islamic State group separately from their mission of advising and assisting Afghan defense forces in their battle against the Taliban.

The Taliban and IS are sharply divided over ideology and tactics, with the Taliban largely confining their attacks to government targets and Afghan and international security forces. The Taliban and IS have fought each other on a number of occasions, and the Taliban are still the larger and more imposing force.