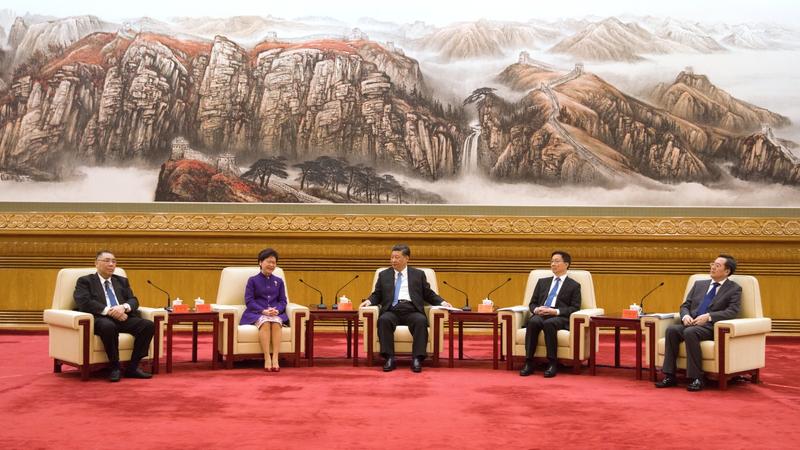 HONG KONG - Chief Executive Carrie Lam Cheng Yuet-ngor said on Monday she was “inspired” by President Xi Jinping’s recognition of the special administrative region’s contributions to the country’s reform and opening-up, as well as his expectations of the city being better integrated into national development.

She also expressed confidence and optimism in Hong Kong’s future, both in the development of traditional industries and newly emerging sectors.

Lam was speaking in Beijing after Xi met members of delegations from the Hong Kong and Macao SARs at the Great Hall of the People. The 165-strong Hong Kong delegation comprised the city’s political and business elite, philanthropists, as well as professionals in the educational, scientific research, culture and arts fields.

Lam noted other members of the team shared the same feelings, adding they were also encouraged by Xi’s belief that Hong Kong will continue to play an irreplaceable role in the nation’s development.

The delegation attended a seminar co-organized by the National Development and Reform Commission and the State Council’s Hong Kong and Macao Affairs Office on Sunday before meeting the president on Monday.

According to Lam, seven Hong Kong representatives from various sectors gave speeches on the two occasions, sharing their thoughts on the SAR’s future development in the fields of financing, economy, infrastructure construction, investment, education and science and technology.

She said their suggestions won applause from State leaders, who said their proposals would be given proper consideration.

As the nation continues to reform and open up, Lam reiterated that Hong Kong will leverage its unique strengths to contribute to the country.

Efforts will include reinforcing Hong Kong’s status as a global finance, trading and maritime hub, and propelling the development of emerging industries, such as technology and innovation.

Lam noted that Hong Kong has made plenty of progress in these areas following Xi’s call in May to turn Hong Kong into an international inno-tech hub and allow cross-boundary use of national funds.

Last week, the Hong Kong SAR Government signed an agreement with the nation’s top scientific institution, the Chinese Academy of Sciences, allowing the Beijing-based academy to set up a branch in Hong Kong.

The government also sealed an accord with the Ministry of Science and Technology in September, outlining a “top-level” action plan for future Hong Kong-mainland inno-tech cooperation.

The Hong Kong delegation wrapped up its three-day visit to the mainland on Monday. Before arriving in Beijing, the team on Saturday visited Shenzhen -- a vanguard of the country’s reform and opening-up.