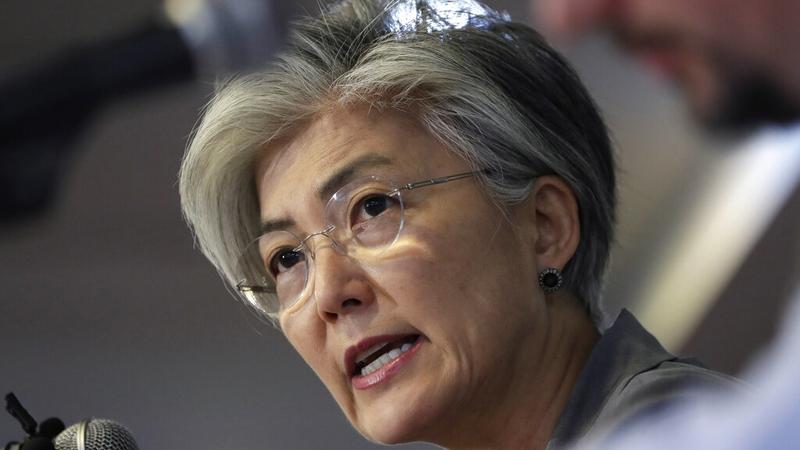 The Republic of Korea (ROK)'s Foreign Minister Kang Kyung-wha answers a reporter's question during a meeting with members of foreign media in Seoul, ROK, May 3, 2019. (LEE JIN-MAN / AP)

SEOUL - China provided constructive help for the ongoing peace process on the Korean Peninsula as China and the Republic of Korea (ROK) are on the same page, ROK Foreign Minister Kang Kyung-wha said on Friday.

Kang said at a press conference in Seoul that China had the same goal with ROK in achieving denuclearization and peace on the peninsula.

The ROK top diplomat said China provided constructive help for the peninsula's peace process given the exchange of views between leaders of China and the Democratic People's Republic of Korea (DPRK) and the senior-level exchanges.

"The peace process has advanced although the second summit between the DPRK leader and US President Donald Trump ended with no agreement in late February in the Vietnamese capital of Hanoi," Kang noted.

Kang said Trump expressed willingness to meet again DPRK top leader Kim Jong-un, who showed intention in keeping a dialogue with the US.

"We remain optimistic that at some point, they'll return to the dialogue," she noted.

Kang said her country was making every effort, mobilizing all of its diplomatic sources, to help resume negotiations between Pyongyang and Washington, noting that the effort was based on the ROK-US alliance and close consultations with neighboring countries.

"There has to be a comprehensive roadmap" for the denuclearization, Kang said as she expressed her anticipation for the DPRK and the US to draw it up in the dialogue table.

Guaranteeing the DPRK's security should be included in the denuclearization process, she said without elaborating further.

Regarding the inter-Korean relations, the foreign minister said the ROK-DPRK ties were influenced by the DPRK-US relations following the Hanoi summit.

However, she noted that regular exchanges between the two Koreas were still happening through various channels such as the joint inter-Korean liaison office in the DPRK's border town of Kaesong that opened last September for the round-the-clock communications.

Kang said ROK made efforts to "revitalize both tracks" between the two Koreas and between the DPRK and the US, citing the scheduled visit by Stephen Biegun, US special representative for DPRK affairs, to Seoul next week.

Following the Hanoi summit, ROK President Moon Jae-in said he will push for his fourth summit with the DPRK leader "in any place and formality at the North Korea (DPRK)'s convenience."

Moon received the message from Trump, who asked the ROK president to convey it to the DPRK leader, during their Washington summit last month.