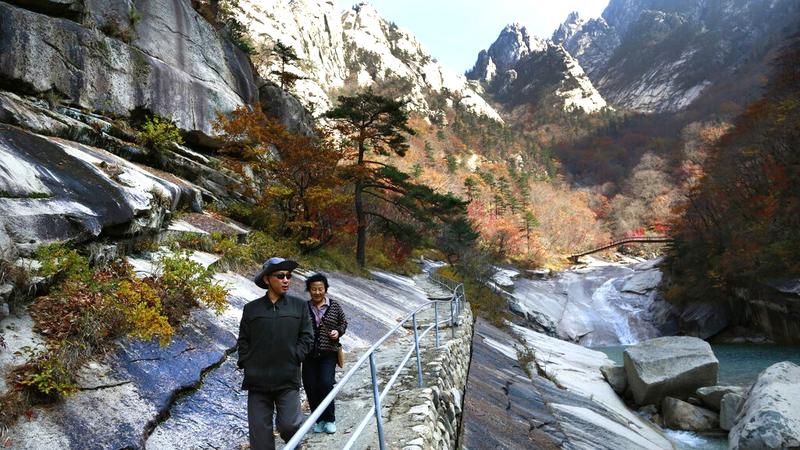 In this Oct 23, 2018, file photo, local tourists walk on the trail at Mount Kumgang, known as Diamond Mountain, in the Democratic People's Republic of Korea.(DITA ALANGKARA / AP)

SEOUL — The Unification Minister of the Republic of Korea (ROK), Kim Yeon-chul, said on Monday that the ROK-built lodging facilities in the Mount Kumgang resort of the Democratic People's Republic of Korea (DPRK), were required to be repaired as they were left unattended for long.

Kim told a local journalists' association in Seoul that some 340 containers were built by the ROK as temporary lodging facilities to promote Mount Kumgang tour.

The minister said the containers were left unattended since the tour program was halted, noting that local businesses involved in the program expressed the need for an initial repair, according to local media reports.

The Mount Kumgang tour, launched in 1998, has been suspended since a female tourist from the ROK was shot dead in 2008 by a DPRK soldier after allegedly venturing into off-limit areas.

Top DPRK leader Kim Jong-un, who said that he would welcome compatriots from the ROK to visit Mount Kumgangat at any time they want, ordered to remove ROK-built "shabby" facilities in the resort in October under an agreement with the ROK.

Seoul proposed to hold face-to-face working-level talks with Pyongyang to discuss the issue, but the DPRK preferred the exchange of letters, rather than sitting down on a dialogue table.

The unification minister said there were still differences between the two Koreas over the issue.

He noted that what the ROK proposed to the DPRK was not concrete, adding that the two sides can make various discussions.