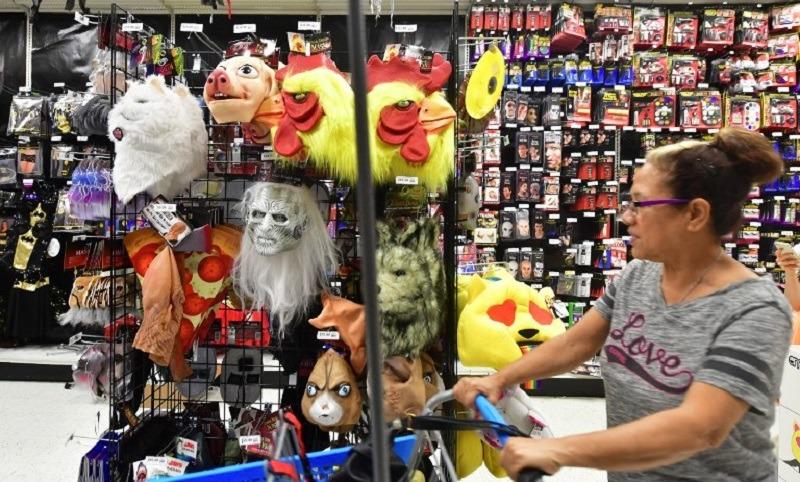 A woman pushes her shopping cart past a display of masks as people shop for Halloween merchandise in Alhambra, California on Oct 23, 2017. (FREDERIC J. BROWN / AFP)

A new multi-industry coalition of US businesses, agriculture groups and manufacturers launched a multi-million-dollar campaign on Wednesday to bring more attention to the harm tariffs are doing to business and the economy.

The Americans for Free Trade coalition includes the National Retail Federation, the American Petroleum Institute, the Toy Association and more than 80 other organizations. The campaign is called "Tariffs Hurt the Heartland" and is the largest unified effort by US businesses against tariffs to date.

The coalition is teaming up with Farmers for Free Trade, a group backed by the nation's largest agriculture commodity groups.

The Americans for Free Trade coalition includes the National Retail Federation, the American Petroleum Institute, the Toy Association and more than 80 other organizations

Americans for Free Trade will kick off the initiative next week with events in Chicago, Nashville, Tennessee, and cities in Pennsylvania and Ohio to highlight the importance of global trade to the US economy.

The campaign involves reaching out to members of the Congress, buying ads and hosting town-hall style meetings in swing states to tell stories about how tariffs are hurting US businesses, farmers, workers and families.

The coalition's website will feature a geographically searchable map that pinpoints stories of businesses and individuals being hurt by the tariffs.

In a letter to members of Congress, the coalition called on lawmakers to participate in events next week and to play a more active role in trade policy and prevent further harm from the tariffs.

"We also strongly encourage Congress to exercise its oversight role on trade policy matters to prevent further harm to US workers, consumers and families that will result from new tariffs - both those already being implemented and future tariffs that have been proposed," the letter said.

Rick Helfenbein, president and CEO of the American Apparel & Footwear Association, wrote in an email to China Daily that his group considers tariffs "a hidden tax on American consumers. Currently, 41 percent of apparel imports, 72 percent of footwear imports, and 84 percent of travel goods come to the US from China. A decision to impose additional tariffs on these products will clearly result in increased prices, paid for by American families."

Helfenbein said his group's products are already highly taxed at the border.

"Our industry represents only 6 percent of all imports to the US, but we pay 51 percent of duties currently collected by the US government. An additional tax burden is not welcome."

Concern over the escalating nature of the tit-for-tat tariff dispute between the China and the US prompted the Toy Association to join the coalition, said Steve Pasierb, president and CEO of the group that represents toy companies in the US.

About 85 to 90 percent of the toy companies in the US are small businesses, "so they are not all a Mattel or Hasbro", he told China Daily.

"The average price of a toy sold in America is US$10," Pasierb said. "So if you have a 25 percent tariff that takes the toy to US$12.50 and while that doesn't sound too bad an average family might spend US$100 on a child for Christmas. They are not going to spend US$125."

He said toy companies are facing rising costs from tariffs that have affected prices for raw materials and component parts. "Our companies are absorbing those increases, but they can't keep doing that for the long term," Pasierb added.

The National Marine Manufacturers Association is part of the coalition. The boating industry has been hit from multiple sides in the trade war, with tariffs on raw materials and components along with Europe's retaliatory measures, which have closed off the market there.

READ MORE: China to take countermeasures depending on US tariff action

"This tit-for-tat tariff is not getting us anywhere and at the same time, the aim from the administration is 'We're trying to help the US' and this is having the exact opposite effect. This is hurting US manufacturers," said Nicole Vasilaros, vice-president at the association.

A study by the Consumer Technology Association found that the proposed tariffs on US$200 billion in Chinese goods would have a major impact on tech, leading to supply chain disruption and increased costs totaling US$900 million to US$1.8 billion.

"That's why we've decided to be part of this broader coalition, with the aim of getting the president to shift away from this focus on tariffs," said Dean Garfield, president and CEO of the Information Technology Industry Council.

Paul Welitzkin contributed to this story.