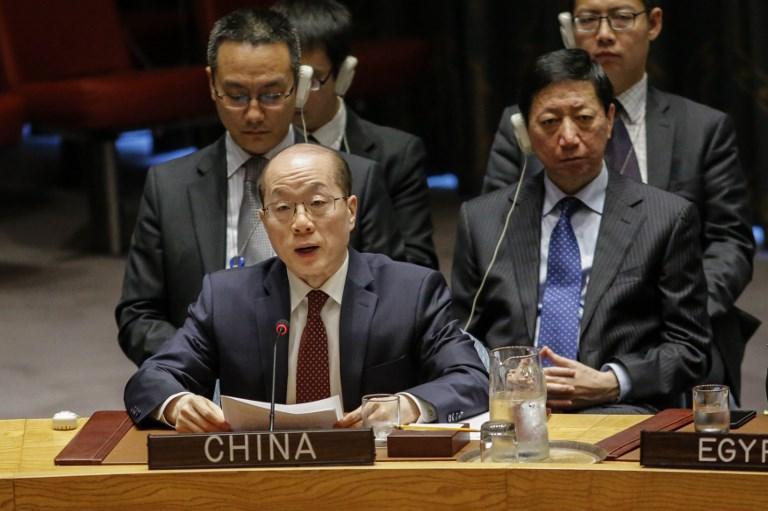 China's ambassador to the United Nations, Liu Jieyi speaks during a meeting over the Democratic People's Republic of Korea's new sanctions on Sept 11, 2017 at the UN Headquarters in New York. (KENA BETANCUR / AFP)

The UN Security Council on Monday unanimously adopted a resolution to impose fresh sanctions on the Democratic People's Republic of Korea (DPRK) over its nuclear test on Sept. 3 in violation of previous Security Council resolutions.

He said the resolution called for a peaceful settlement through diplomatic and political means, supported the resumption of six-party talks and stressed measures to de-escalate tension on the peninsula.

"The Chinese side hopes that this resolution will be implemented comprehensively and completely," the spokesperson said.

As a neighbor of the Korean Peninsula, China has been closely following the development of the situation there, Geng said.

He said that China's unswerving stance was denuclearizing the Korean Peninsula, maintaining peace and stability there and resolving problems through dialogue and consultation.

The 3rd UNSC action in five weeks curtails the DPRK's overall oil supply by almost 30%, bans all its textile exports and remittances from some 93,000 DPRK laborers

Monday's resolution, the third Security Council action concerning the Asian country in five weeks, curtails the DPRK's overall oil supply by almost 30 percent through a 55-percent reduction of gas, diesel and heavy fuel oil supplies, bans all its textile exports worth US$800 million and remittances from some 93,000 DPRK laborers from abroad.

With the new measures, 90 percent of the DPRK's exports are now banned, Nikki Haley, the US ambassador to the United Nations, told the council after the vote.

British ambassador Matthew Rycroft said what the council did on Monday was to demonstrate that Pyongyang's provocations will be matched by consequences.

China's permanent representative to the United Nations, Liu Jieyi, condemned the DPRK's nuclear test on Sept 3, saying China is committed to the denuclearization of the Korean Peninsula.

He urged the DPRK to heed the aspirations and will of the international community, abide by Security Council resolutions, refrain from any more missile launches or nuclear tests, and return to the track of denuclearization.

"The nuclear issue of the Korean Peninsula must be resolved peacefully. Integrated measures must be taken to balance the legitimate concerns of all parties," said Liu.

All parties must be cool-headed and avoid rhetoric or action that would aggravate tension, he said.

Russian ambassador Vassily Nebenzia deplored the fact that the new resolution did not take in enough thoughts of Russia with respect to the peaceful settlement of the issue through diplomatic and political means.

Monday's resolution followed a council resolution on Aug 5, which imposed a ban on the export of coal, iron, iron ore, lead, lead ore, and seafood from the DPRK, among other restrictive measures.

The council also adopted a presidential statement on Aug 29 condemning the DPRK's launch of a ballistic missile that flew over Japan a day earlier as well as other missile launches on Aug 25.

The Republic of Korea (ROK) and Japan have welcomed the new sanctions.

He said "it is important to put an unprecedented level of pressure on the DPRK to make it change its policies."

The Republic of Korea (ROK), meanwhile, said the only way for Pyongyang to escape isolation and economic hardship is to end its nuclear program.

"North Korea needs to realize that a reckless challenge against international peace will only bring about even stronger international sanctions against it," the South's presidential Blue House said.