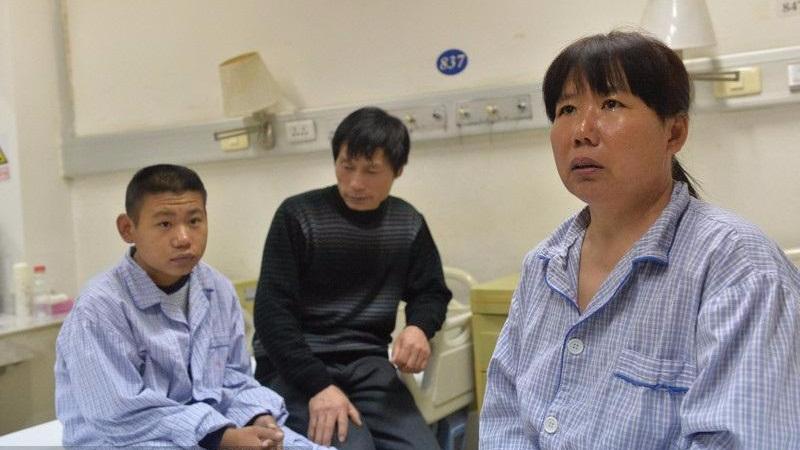 Li Kai is with his parents before a kidney transplant operation on him and his mother at General Hospital of Chinese People's Armed Police Forces in Beijing. (PHOTO / IC / Chinadaily.com.cn)

The Children's Hospital at Fudan University in Shanghai announced on Monday the establishment of an international exchange school for automatic peritoneal dialysis for children with kidney problems. Peritoneal dialysis is a way to remove waste from the blood when the kidneys fail.

Through a live internet broadcast, more than 30 doctors and nurses specializing in pediatric kidney diseases from Hong Kong, Taiwan and three Southeast Asian countries (Thailand, Malaysia and Indonesia) participated in the school's first training course, which was launched to promote best APD practices in countries and regions involved in the Belt and Road Initiative.

Between 2,000 and 3,000 new uremia patients younger than 18 are identified annually in China, according to the National Health and Family Planning Commission

In addition, 80 pediatricians from 22 medical centers in 18 provincial-level regions on the Chinese mainland attended the course in person. Experts from the Chinese mainland and Taiwan, joined by others from Canada, shared their experience with APD for children and the diagnosis and treatment of dialysis-related peritonitis.

APD, which allows young uremia patients to receive dialysis treatments at home - and at night, so it doesn't interfere with their schooling - has been widely adopted in developed countries, but its use in developing countries is much lower, said Xu Hong, Party chief of the hospital and director of the Shanghai Kidney Development and Children's Kidney Disease Research Center.

In 2001, the Shanghai hospital became the first on the Chinese mainland to introduce APD treatment for young uremia patients. Currently the more than 70 children who visit the hospital regularly are all using it, making the hospital the leading source of registration data among its 229 members of the International Pediatric Dialysis Network, according to Xu.

In the future the training courses will be held at least once a year. The hospital will also host on-site training for international fellows, Xu said.

Between 2,000 and 3,000 new uremia patients younger than 18 are identified annually in China, according to the National Health and Family Planning Commission.

"While waiting for a donated kidney, we must use peritoneal dialysis to maintain and improve our health to get ready for a possible transplant," said Zhang Zonghao, 23, who started APD in 2005 after being diagnosed with end-stage renal disease. Zhang underwent a successful kidney transplant in 2007.

If young patients receive traditional peritoneal dialysis, they must do it at least four times a day, which prevents them from going to school and their mothers from working, Zhang said.

But APD machines, which offer tailor-made treatment plans for different patients according to their age, weight and other clinical requirements, can work at night.

"It's great for ensuring such children can go to school and also makes them feel self-confident and less isolated from their peers and society," he said.