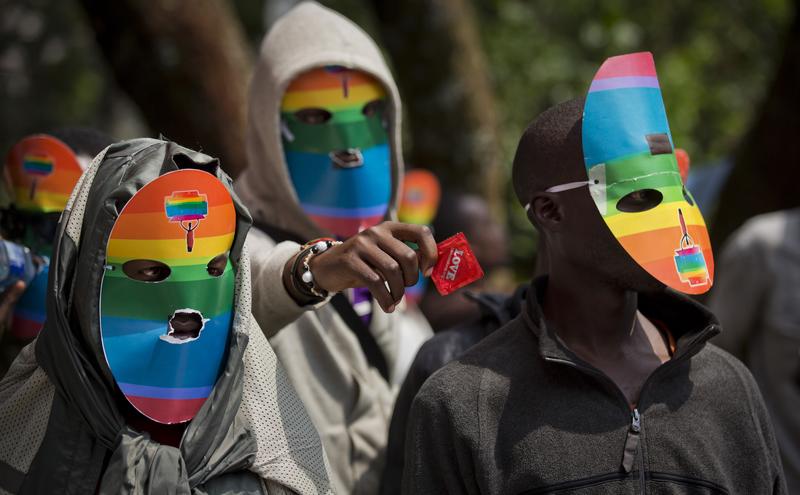 In this file photo of Feb 10, 2014, Kenyan people who identify as gay and lesbian and others supporting their cause, wear masks to preserve their anonymity and one holds out a wrapped condom, as they stage a rare protest in Nairobi, Kenya. (BEN CURTIS / AP)

NAIROBI — Kenya's High Court has postponed until May 24 a ruling on whether to strike out or uphold a colonial-era law banning gay sex, a judge said on Friday.

Judge Chacha Mwita told a packed court in the capital, Nairobi, that the bench constituted to hear the case needed more time to prepare for the ruling.

These and many other challenges may begin to fade away for the Kenyan gay community if a court rules Friday in their favor to abolish laws that criminalize homosexual behavior.

The court case stems from a petition by the National Gay and Lesbian Human Rights Commission, and the Gay and Lesbian Coalition of Kenya. The groups argue that sections of the code are in breach of the constitution and deny basic rights by criminalizing consensual same-sex relations between adults.

Existence of these laws within the Penal Code validate stigma, discrimination and violence toward individuals who do not conform to society's expectations on gender identity, gender expression or sexual orientation, they argue.

In Kenya, people convicted of gay sex face up to 14 years in prison

"It means having the law affirming our existence and validating that we, like all Kenyans, are protected under the law," she said.

In Kenya, people convicted of gay sex face up to 14 years in prison. Many countries across Africa have laws against homosexuality, and severe harassment and physical threats are common.

Kenyan laws, like in many other African countries that outlaw same sex relations, are vestiges of British colonial rule.

There is resistance to gay rights right at the top.

Gay rights are "not of any major importance" in Kenya, President Uhuru Kenyatta told CNN in an interview last year. He told CNN that the laws are supported by "99 percent" of the Kenyan people.

"Within families there is a deep sense of shame when they learn one of their own is a gender or sexual minority. While the broader community views the LGBTI persons as wrong, sinful and generally use similarly stigmatizing adjectives," he said.

Negative perceptions are largely informed by ignorance about the causes of gender and sexual diversity, Kuria said.

"For many it is an acquired habit, which can therefore be dropped, or it is a sickness that needs to be cured. Either way, it is something that is wrong and needs to be corrected," he said.

Kenyan courts which many assumed to take a conservative view on issues of sexuality have so far ruled largely in favor of the petitions over LGTBQ rights. 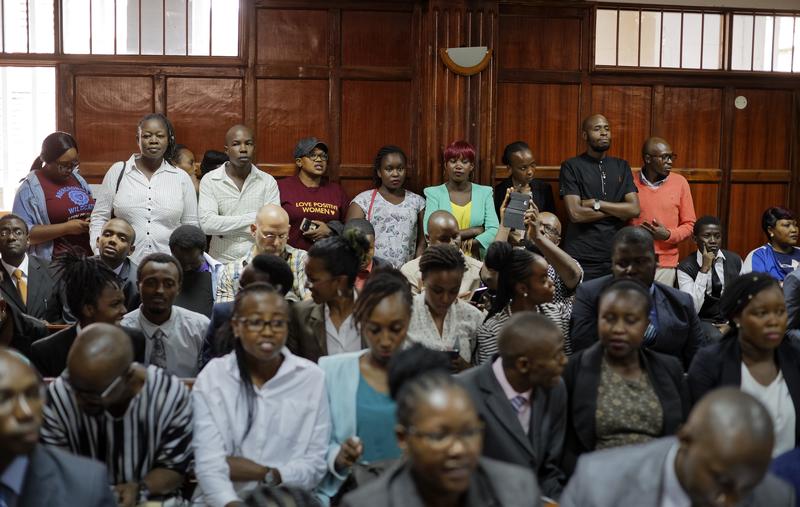 In this file photo of Feb 22, 2018. Members of the public fill the courtroom as the High Court in Kenya begins hearing arguments in a case challenging parts of the penal code seen as targeting the lesbian, gay, bisexual and transgender communities, at the High Court in Nairobi, Kenya. (BEN CURTIS / AP)

Kenyan judges in April 2015 ordered a government agency to register a human rights group representing the country's gay people. The Kenyan constitution recognizes and protects the rights of minorities, the three judges of the High Court said in their ruling. The Non-Governmental Organization Co-ordination Board had refused to register the rights group on religious and moral grounds.

In September, the court lifted a ban on Kenya's first film to premiere in the Cannes Film festival to allow limited showings, after censors banned the film over its gay content.

A positive ruling on Friday would help the community move to the next item on their agenda which is reconciliation with their own families, said Kuria.

The removal of the criminal tag will certainly help family reconciliations, he said.

"Many people whose are sexual and gender minorities, whose sexual orientation or transgender status is known, tend to have difficulties relating well within their families. Many are out rightly rejected or treated with stigma."

In case of a negative ruling, the fact that the case was heard gave gays important visibility, said Njueh.

"It dismantled the myth that homosexuality is a western agenda since the petitioners are Kenyans and the support we have from the sexual and gender minorities, who have religiously been attending court hearings affirms our existence," she said.

"It also opens avenues for conversation around sexual and gender minorities."