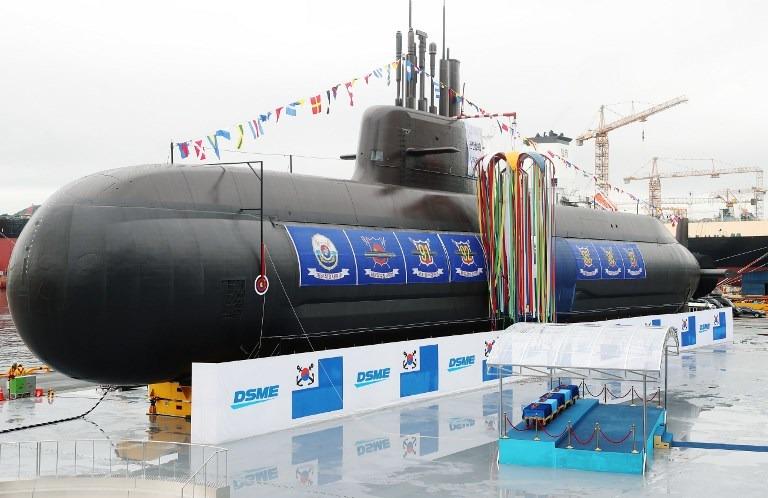 The 3,000-tonne diesel-electric submarine, Dosan Ahn Chang-ho, is seen during a launching ceremony at a shipyard on the southern island of Geoje, Republic of Korea, on Sept 14, 2018. ROK launched its first ever missile-capable attack submarine on that day despite a recent diplomatic thaw with the Democratic People's Republic of Korea. (PHOTO / YONHAP / AFP)

Moon made the remarks at the launching ceremony for the country's first homegrown 3,000-ton submarine, named after Dosan Ahn Chang-ho, a prominent ROK independent fighter during the 1910-45 Japanese colonization of the Korean Peninsula.

Moon Jae-in, President of the Republic of Korea

"Peace through strength is a security strategy our government unswervingly pushes for," Moon said at the ceremony, which was held to commission the diesel-electric air-independent propulsion submarine that is 83.3 meters long and 9.6 meters wide.

Moon said the road to peace will not be blocked only when strong military and defense capability go together.

The ceremony was held at the Okpo shipyard of Daewoo Shipbuilding and Marine Engineering, a local shipbuilder which designed and built the submarine, in the country's southern island of Geoje.

The submarine, which is a part of the Navy's project to indigenously build 3,000-ton submarines, is capable of carrying 50 crew members and operating underwater for up to 20 days without surfacing. It is equipped with six vertical launching tubes that can fire submarine-to-ground ballistic missiles.

Moon said peace can never be earned by itself, but made and protected by people of the country, noting that his country had begun creating a new path to the denuclearization and lasting peace on the Korean Peninsula.

President Moon was scheduled to visit Pyongyang for three days from Sept 18 for his third summit with top DPRK leader Kim Jong-un.

Moon said he would focus on issues on the denuclearization and the eased military tensions in border areas during his summit with the DPRK leader.