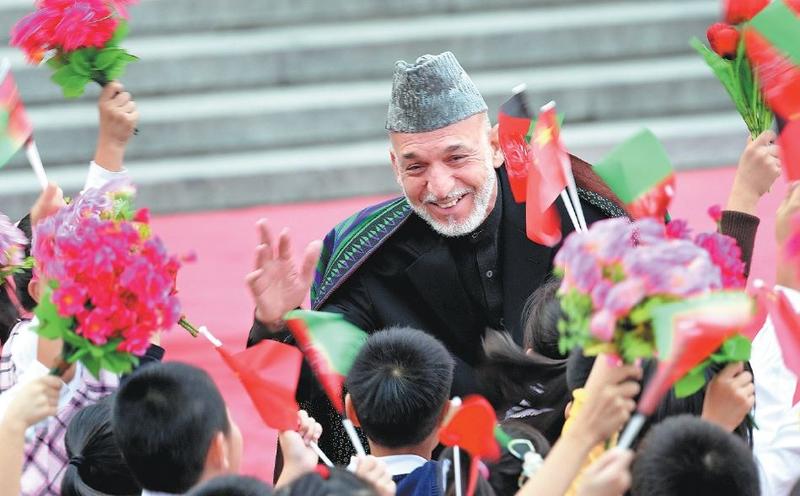 Afghan president Hamid Karzai is welcomed by children at a ceremony held in Beijing on Sept 27, 2013. (XU JINGXING / CHINA DAILY)

China impressed former Afghan president Hamid Karzai when he first visited the country in 2002 - the friendliness of the people, the depth of the culture, and even the traditional Chinese cuisine.

However, as he continued to visit China almost every year since then, Karzai said he found himself increasingly marveling at its achievements in social and economic development. "No society, no country in history has achieved so much in such a short time," he said in Beijing last month.

No society, no country in history has achieved so much in such a short time

Karzai, 61, was in the capital after attending the Imperial Springs International Forum, which was held in Guangzhou, Guangdong province, on Dec 10 and 11. Along with other foreign representatives to the forum, he met with President Xi Jinping in Beijing.

He said visiting China over the years has given him lots of good memories.

"When I visited in 2002, China was already taking a huge leap forward in development. It had already achieved a great scale in development and progress," he said, recalling his first visit to China as president of the transitional government of Afghanistan at that time.

The country's success in lifting 700 million people out of poverty over the past 40 years was impressive, he said.

The country's booming infrastructure drive is another achievement that has impressed him.

"Thousands and thousands of kilometers of roads, of railway lines and high-speed trains. Now, China is the country with the largest high-speed railway network in the world. So these are massive achievements - highly commendable and admirable," he said.

Karzai is also impressed with the efficiency in China's governance system, its economic endeavors, as well as the technical expertise of its economy. He has a keen interest in Chinese culture, and has been highly impressed by the depth of Chinese civilization.

"I was introduced to Chinese literature and poetry four years ago, and I have kept reading it," he said. "It's very beautiful.

"You have put together your grand old civilization with the best of modernity and achievement in the technical expertise of today."

Karzai has been to more than 10 Chinese cities, and has visited tourist attractions such as Jiuzhaigou and Dujiangyan in southwestern China's Sichuan province. He added that the country offers a unique combination of modern and historic elements.

In June, when President Xi Jinping met with Afghan President Ashraf Ghani during the Shanghai Cooperation Organization summit in Qingdao, Shandong province, Xi said China would continue to provide assistance within its capacity to boost Afghanistan's economic and social development, and also support its participation in the Belt and Road Initiative.

The two sides should enhance their anti-terrorism and security cooperation, and China would continue to firmly support the Afghan government's efforts in safeguarding peace in the country, Xi said, adding that the key to realizing Afghanistan's political stability and lasting peace lies in sticking to an "Afghan-led, Afghan-owned" political reconciliation process.

Karzai echoed Xi's opinion, saying China has been a steadfast friend and a very good neighbor to the Central Asian nation.

"China has contributed to Afghanistan's well-being and stability, giving us economic assistance," he said. "We value very highly the decades of Afghan-China relationship, and especially China's contributions in Afghanistan in the past 18 years, which have been very significant."

Karzai added that Afghanistan sees China as having an extremely important role in peace and reconciliation in the country as China has all three elements required for this role.

"China is a neighbor. China is a friend of both Afghanistan and Pakistan. China is a major world power," he said, adding that China has the capacity, means, and connections to contribute to Afghan peace and stability.

The Afghan side welcomed the trilateral mechanism and appreciated the Chinese government's efforts to make it work.

"Since there is now a new effort by the United States to bring peace to Afghanistan, we hope that the US will seek China's assistance in this and work together with China, our other big neighbors, and major power Russia," he said. "So, the three joining hands will surely make contributions to Afghan peace and stability."

Karzai also spoke highly of the Belt and Road Initiative proposed by Xi. Afghanistan was one of the earliest countries to support the initiative.

Chinese businesses have been involved in the mining and the oil and gas sectors in Afghanistan. In 2008, a consortium launched by China Metallurgical Group and Jiangxi Copper won the contract to recover resources from the Mes Aynak copper mine in Afghanistan, which Afghan authorities said contains the world's second-largest copper deposit.

China was Afghanistan's largest source of foreign investment and its third-largest trading partner, Xinhua News Agency reported in May 2017.

According to data from China's General Administration of Customs, China's trade volume with Afghanistan reached $1.09 billion in 2016, up by 16.5 percent year-on-year.

"The Belt and Road Initiative is an extremely significant project not only for China and China's economic rise and expansion, but also for Afghanistan and the region, because this means connectivity for all of us," Karzai said.

Afghanistan welcomes China's investment in Afghanistan, and the country is seeking more Chinese involvement in the Afghan economy, he said.

Karzai also welcomed Xi's proposal to build a community with a shared future for mankind, saying that it is a "tremendously good vision".

"That's a vision that we all need, and that mankind needs," he said. "And surely China will find people in the international community all around the world, individuals and societies and governments, working together with it and helping achieve this goal."

Karzai also said that Afghanistan can learn from China's development experience as its economic growth has been phenomenal, and the Afghan government must make reasonable policies to bring benefits to its people.

He said it is important for Afghanistan to find a development path that suits its conditions in order to achieve national development.