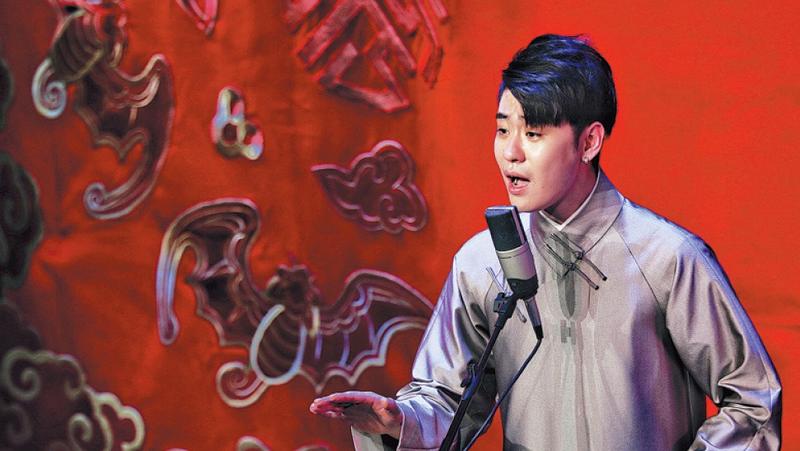 Zhang Yunlei at a performance in Harbin, Heilongjiang province, in November 2018. Zhang is in the middle of a scandal for joking about Peking Opera actresses as part of his act. (PHOTO PROVIDED TO CHINA DAILY)

It was meant to be a happy show, but when a video of a cross-talk, or xiangsheng, performance by Zhang Yunlei and Yang Jiulang circulated on Sina Weibo on Nov 23, it sparked outrage among users of the Chinese social media platform because Zhang had joked about Peking Opera actresses Zhang Huoding and Li Shiji (1933-2016).

The show was recorded in Beijing in May 2018 as part of the cross-talk duo's national tour. During the performance, Zhang Yunlei made fun of the names of Zhang Huoding and the late Li by calling them dingding and jiji respectively, which in Chinese are considered offensive remarks. He also joked that he once took a shower with Zhang Huoding because they were good friends.

Fans of the two stage actresses were offended.

One Weibo user wrote in comments: "Peking Opera is a national treasure and the artists are respected. Your jokes are not funny."

Another wrote: "Was that the only joke you could think of? Think about ethics as an artist."

Zhang Huoding, 48, is one of the country's biggest Peking Opera stars. She once worked with the China National Peking Opera Company and has performed in sellout shows across the country, including a solo show at the Great Hall of the People in 2007. She is known for performing the art of the Cheng School of Peking Opera, a style founded by Cheng Yanqiu (1904-58), one of the great Peking Opera masters of the 20th century.

Li Shiji was the adopted daughter of Cheng and started to learn Peking Opera at age 12. She received personal training from the master and kept on the tradition of Cheng school's singing style, such as fully highlighting the contrasts of vocal highs and lows, creating a sentimental and subtle voice that often portrays virtuous female roles.

The Society of Cheng School of Peking Opera issued a statement on Nov 26, criticizing the cross-talk hosts and demanded an apology.

"Many great cross-talk masters, such as Hou Baolin and Ma Sanli, have created classic works, some of which combined the use of Peking Opera," the statement said. "Zhang Yunlei has performed Peking Opera pieces in his works, but if the purpose was for joking, we hope that he would stay away from the art form."

On Nov 30, China Quyi Artists Association also condemned that the two comedians, saying their performance had negative effect on the art form.

Quyi, in Chinese, is a general term for traditional Chinese folk art forms, including ballad singing, storytelling and cross-talk.

Zhang Yunlei, 27, was born in Tianjin and started to learn crosstalk at the age of 11 with veteran performer Guo Degang.

With over 150 years of history in China, cross-talk was first publically staged in Beijing in 1862, when the performers began to appear and attract audiences in the Tianqiao area of the city.

As a member of the cross-talk performance group Deyunshe, which was founded by Guo in 1995, Zhang Yunlei is one of the most popular performers in China. He has become a phenomenon with his fans, mostly female, singing along with him during his shows, with glowing light sticks in hand, which is a scene usually seen at pop concerts.

Deyunshe is credited with reviving cross-talk by giving sold-out shows, enjoyed by young and old alike.

So far, the cross-talk hosts have not commented publically on the controversy.