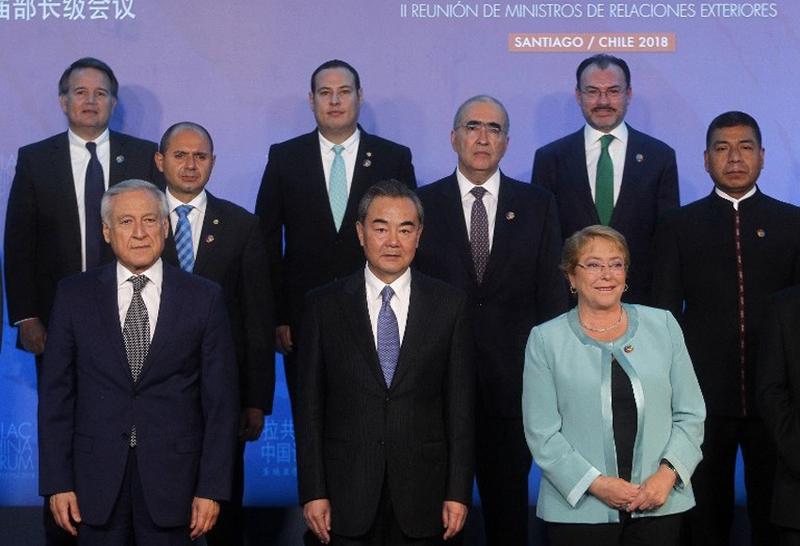 SANTIAGO – With the China-proposed Belt and Road Initiative grabbing headlines around the world over the past years, Latin America and the Caribbean is giving special attention to how the Initiative could be extended to the region.

On Monday, foreign ministers of China and member countries of the Community of Latin American and Caribbean States (CELAC) gathered in Santiago, capital of Chile, for the Second Ministerial Meeting of the China-CELAC Forum.

At a time when multilateralism appears to be weakening, when countries have withdrawn from crucial agreements, such as the Paris Agreement, we must open the door to free trade and cooperation.

With the chance of addressing China directly, a crucial trading partner and investor for the region, and staunch supporter of international development, the CELAC ministers were united in backing multilateralism and China-proposed Belt and Road Initiative.

Speaking at the opening ceremony, Chilean Foreign Minister Heraldo Munoz said that one of the things binding Latin America and the Caribbean together was a commitment to multilateralism.

"At a time when multilateralism appears to be weakening, when countries have withdrawn from crucial agreements, such as the Paris Agreement, we must open the door to free trade and cooperation," he said.

"The Belt and Road Initiative is a great program of President Xi Jinping which we hope that, like the ancient Silk Road, will not only go to Europe but also extend to Latin America and the Caribbean," he added.

Proposed by Xi in 2013, the Belt and Road Initiative refers to the Silk Road Economic Belt and the 21st Century Maritime Silk Road, aimed at building a trade and infrastructure network connecting Asia with Europe and Africa along the ancient trade routes of Silk Road.

Munoz said that the Belt and Road Initiative has been welcomed unanimously by the region, believing that the 21st Century Maritime Silk Road has four components – land, sea, air and digital.

"Digital may be the most important of these. Many Chilean customers buy products from China online. We must increase this trans-Pacific community in order to bring together our common interest," Munoz said.

This sentiment was echoed by Hugo Martinez, foreign minister of El Salvador and current president pro tempore of CELAC.

Martinez said: "China has taken a proactive stance which has led to the Belt and Road Initiative (BRI) being welcomed by Latin America. China has also had a proactive stance in this forum, not only with the BRI but also with the letter we received from President Xi Jinping."

In a congratulatory letter sent to the ministerial meeting of the China-CELAC Forum, Chinese President Xi Jinping called on Latin American countries to actively participate in the Belt and Road Initiative and forge a trans-Pacific path of cooperation that links China and Latin America more closely.

China is ready to move ahead hand in hand with Latin America and the Caribbean, while bringing both sides closer together, Xi said.

Talking on this, Martinez said that China and CELAC consider each other to be "trusted strategic partners", and share a desire for free trade worldwide, strong and inclusive multilateralism and a commitment to the 2030 Agenda for Sustainable Development.

Eduardo Frei Ruiz-Tagle, Chile's former president (1994-2000) and the country's special envoy to the Asia-Pacific, said that the meeting had helped clarify the Belt and Road Initiative to countries in the region.

"The 21st Century Maritime Silk Road from China to Latin America means the development of infrastructure, connectivity, which is why we are talking about a subsea fiber optic cable, investment in major infrastructure works, in ports, in the bioceanic routes between the Atlantic and Pacific to reduce travel time to China," said Frei.

Pointing out that the China-CELAC Forum will help advance the Belt and Road Initiative, Frei said: “We are discussing what projects we are going (to) do between Chile and China within the Belt and Road. For example, Chile put up for tender the connectivity of southern Chile with Antarctica via a fiber optic cable, which was won by a Chinese consortium.”

The two countries are working on other important projects such as the manufacture of lithium or cobalt batteries, he said.

"We view it as a visionary plan, which could readily be combined with the natural development goals of countries within the region. We think the time is ripe as countries focus on social and economic developmental plans.”

"We have a strong economic partnership with China and Jamaica is very pleased to welcome the letter from President Xi Jinping and to continue working closely with the government and people of China," said Johnson-Smith.

Jamaica has benefited directly from Chinese investment, most famously through a highway across the island that has cut travel time between the north and south coasts by more than half.

Talking on the need to extend the Belt and Road Initiative to smaller nation states in the Caribbean, Maxine McClean, minister of foreign affairs of Barbados, said, "The extension of the BRI is critical for Latin America and the Caribbean as a whole."

"For Barbados, given where it is located to the southeast of the chain of islands, we are an excellent location for a hub. The Maritime Silk Road seeks to connect Asia, Europe and Africa. If you look at where we are located within the Americas, there is significant potential. We must recognize how we can function as a bridge and a hub," she said.

Dennis Moses, minister of foreign and CARICOM affairs for Trinidad and Tobago (T&T), also said his country considers "the Belt and Road Initiative as a very innovative and positive contribution."

"Ministers of the government of T&T participated in the Belt and Road Forum for International Cooperation last year and we certainly look forward to continuing discussions to see what role T&T can play in this initiative. We look at it in a very positive way and we support it," the minister said.