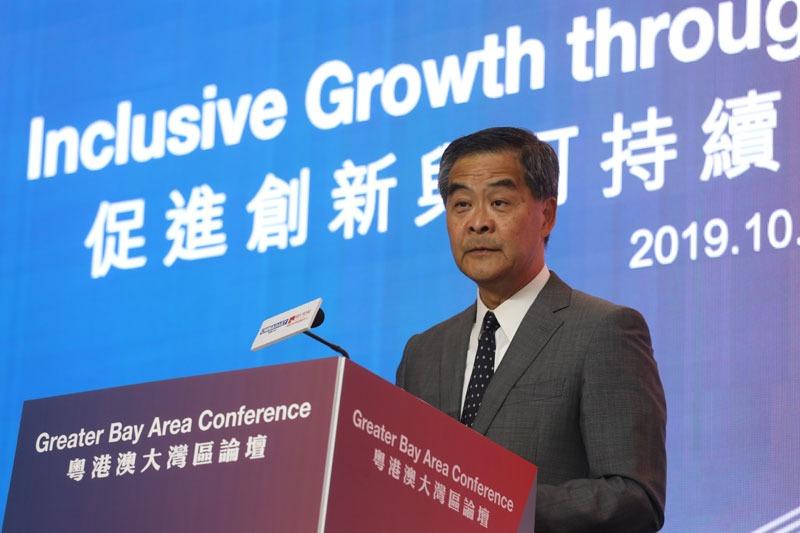 Leung Chun-ying, vice-chairman of the CPPCC National Committee, delivered a keynote speech at the 5th Greater Bay Area conference in Hong Kong on Thursday. Here is the full text:

Inclusive Growth Through Innovation and sustainability

A few years ago I and a few of my senior Hong Kong Government colleagues were in Beijing for a meeting with the Central Authorities. The night before I took my Hong Kong colleagues to dinner. We had to make one decision over dinner table - should we or should we not ask the Central Authorities at the meeting on the following morning to facilitate co-location inspection at the high speed rail West Kowloon station? You know in governments  there are three trays on our desks, an “in” tray, an “out tray”, and a third one, the “too difficult” tray. This to be or not to be question about co-location inspection in West Kowloon had been in the “too difficult” tray for too long. There were legal and the more worrying political obstacles. We had an easy option: separate inspections on the Mainland which would allow high-speed train services to only 4 stations in Guangdong plus the two long-haul destinations in Beijing and Shanghai, therefore only 6 destinations in the entire mainland. We even had a hybrid option 一地一點五檢 which is too complicated to explain here. Before desert was served, we took a deep breath and made a decision. As they say, the rest was history. It was hard work for two successive governments, mine and the next. But it was well worth it. If we didn’t have co-location inspection, our costly high speed rail would have been no more than a feeder service into the 4 Guangdong cities where passengers would have to transfer to get to other destinations in the country’s high speed rail network. Co-location inspection has given us value for money and much more effective integration between Hong Kong and the Mainland.

If one could cast political prejudice aside, one would have to agree that social and political integration between Hong Kong and other parts of the Country, particularly the Bay Area cities are not only inevitable but beneficial as it realises the synergies between the two parts of the Country, so long as they do not compromise Hong Kong’s high degree of autonomy, which is clearly defined by the Basic Law. Since 1990 when the Basic Law was promulgated, “one country two systems, Hong Kong People ruling Hong Kong with a high degree of autonomy” is not just a concept. It is clearly and legally defined. It has been for 29 years.

There were many examples in the past 41 years of reforms on the mainland where policy innovation provided the main impetus for synergy-driven growths in the entire Greater Bay Area. But that too was history. Now we need more.

There are of course synergies among cities. Much has been said about how other Bay Area cities in the world have harvested their synergies and prospered together. Not enough however has been said about one unique and distinguishing feature of the Guangdong Hong Kong Macau Bay Area, and this is the Two Systems and three customs jurisdictions that coexist in this Bay Area. Where market forces in other Bay Area cities are free to realise the synergetic potential, we need policy innovation to lower or remove the barriers between the two systems and the three customs jurisdictions, again, I hasten to add, within the confines of the Basic Law, before market forces can take over. And only governments can initiate such policy changes. Like the co-location inspection experience that I mentioned, government policy innovation is by definition hard work but can yield generous dividends.

What new government policy innovations do I have in mind?

The Hong Kong Macau Zhuhai Bridge would be a good starting point. This is not just about getting financial return on the massive investments that have been made by all sides. More importantly it is about getting economic and social dividends. So far we have not used the Bridge to its fullest potential. In the first ten months of operation, average daily flow was 3,800 vehicles. On a 12-hour basis, the flow was equivalent to 5 vehicles per minute. The flow is small because existing policies allow only a small number of vehicles to cross the bridge. The number of dual-licensed vehicles in Hong Kong plus vehicles that are allowed under the existing quota system are too small. Question : why can’t we allow all Hong Kong private vehicles to use the bridge to enter Guangdong? If congestion is a concern, why can’t we set a limit within which all Hong Kong car owners can apply? The quota can then be adjusted either way, upwards or downwards depending on resultant traffic conditions, until we get to an equilibrium in a steady state. Applications by drivers and car owners can be made online with instant approvals. Young Hong Kong people and others would roam free behind wheels to see Guangdong for themselves.

Next on my list would be giving Hong Kong permanent residents who are not Chinese nationals the facility of going to the Bay Area cities in Guangdong on the strength of their Hong Kong permanent identity cards or a special Greater Bay Area pass, and that means without having to apply for a visa. This move, together with the opening up of the bridge, would encourage among other things, the developments of Hong Kong and international boarding schools in the Guangdong cities, thus providing another choice for Hong Kong based parents.

Third, opening up the housing markets in all the Guangdong Bay Area cities to Hong Kong residents. The new policy could be fine-tuned by specifying the maximum number of units that can be owned by a Hong Kong person at any one time, and the minimum price or size below which the market is closed to Hong Kong residents. This move would in one go enhance Hong Kong People’s stake in the mainland and their understanding of Guangdong and also the sense of affinity.

Fifth, in the reverse direction, Hong Kong should relax entry restrictions for qualified scientists to work in the Lok Ma Chau Loop so that such scientists could commute daily between the Guangdong Bay Area cities and the Loop, without having to relocate their families to Hong Kong.

None of the above changes would be straightforward but we sorely need policy innovation to drive growth in any or all of the economic sectors, be it financial services, trading and logistics or professional services. Experiences in the past 41 years have clearly demonstrated that we need to be bold to initiate changes, to adjust to the changes and to manage the short term pains. We should not and cannot wait until all the boxes are ticked. 41 years of reforms on the mainland and 16 years of CEPA have plucked most of the low-hanging fruits. Going forward we know why the Greater Bay Area can be a success, we know that all the players on both sides will benefit, and we know what government policy changes are needed. It is now a question of how such policy changes can be put together and implemented. Here we need the political resolve on both sides to get them done. The results would be very good news for Hong Kong. And Hong Kong now, more than before, needs good news.