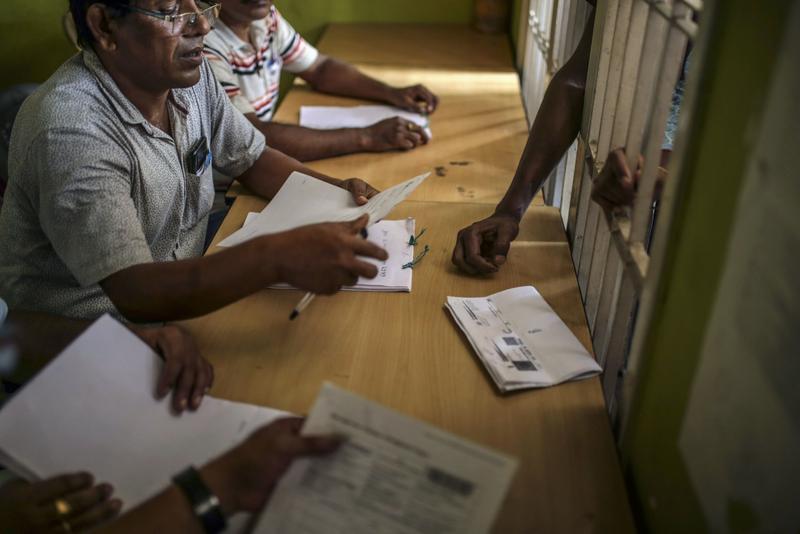 In this Aug 31, 2019 photo, a man waits as official checks his name on newly release final draft of the National Register of Citizens (NRC) at NRC Seva Kendra in Guwahati, India. (PHOTO / BLOOMBERG)

A US federal commission has called for sanctions against India’s home minister and other top leaders if the country passes a controversial bill that will prevent Muslim migrants from neighboring countries from receiving citizenship.

The Citizenship Amendment Bill (CAB) enshrines a pathway to citizenship for immigrants that specifically excludes Muslims, setting a legal criterion for citizenship based on religion. The CAB is a dangerous turn in the wrong direction.

The bill needs approval from the upper house -- expected to come as early as Wednesday -- before it become law. It proposes changes to existing citizenship laws to allow citizenship for Hindus, Sikhs, Buddhists, Jains, Parsis, and Christians who illegally migrated to India from Afghanistan, Bangladesh, and Pakistan. Muslims are excluded from these provisions. If passed as expected, the move threatens the secular foundation of the world’s second-most populous nation and its constitution that treats all religions equally.

“If the CAB passes in both houses of parliament, the United States government should consider sanctions against the Home Minister and other principal leadership,” the United States Commission on International Religious Freedom (USCIRF) said in a press statement. “The CAB enshrines a pathway to citizenship for immigrants that specifically excludes Muslims, setting a legal criterion for citizenship based on religion. The CAB is a dangerous turn in the wrong direction.”

The US commission’s statement was “neither accurate nor warranted,” India’s Ministry of External Affairs said. “The Bill provides expedited consideration for Indian citizenship to persecuted religious minorities already in India from certain contiguous countries. It seeks to address their current difficulties and meet their basic human rights,” the ministry’s spokesman Raveesh Kumar said in a statement.

USCIRF is an independent, bipartisan US federal government commission.

The government says the changes are intended to protect religious minorities escaping persecution from neighboring Muslim-majority countries. Home Minister Amit Shah, who presented the bill in Parliament, has defended it, saying Muslims do not face persecution in Afghanistan, Pakistan and Bangladesh and therefore do not qualify. “If someone comes here to earn a livelihood or to disrupt law and order, then they are intruders,” Shah said in a recent TV interview.

If the bill becomes law, India’s tradition of secularism and pluralism could crumble, said Michael Kugelman, senior associate for South Asia at the Washington-based Wilson Center, who has closely researched India’s politics over the past decade, comparing it with Myanmar’s discriminatory law based on ethnicity introduced in the 1980s.

“What happened in subsequent decades in Myanmar -- particularly the horrors of the massacres of the Rohingya -- underscore just how destructive these types of discriminatory citizenship laws can be for marginalized communities,” said Kugelman.

The bill has evoked both strident support and sharp censure, sparking protests around India, with lawyers working overtime to help millions at risk of being left stateless in the world’s largest democracy.

The hashtag #CitizenshipAmendmentBill2019 was trending on Twitter in India. On Tuesday morning more than 88,000 people had tweeted about the bill, with many supporting the government and others calling it an attack on the country’s secular traditions.