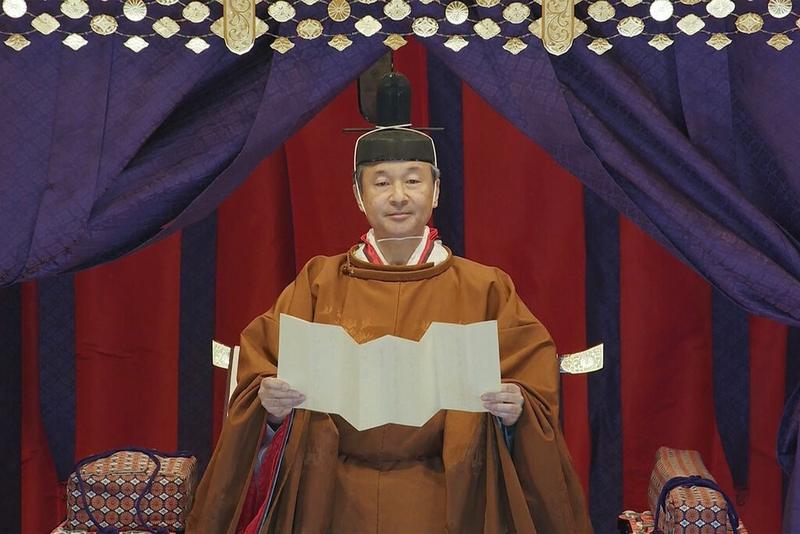 In this image made from video, Japan's Emperor Naruhito proclaims his ascension to the Chrysanthemum Throne at the Imperial Palace in Tokyo, Oct 22, 2019. (PHOTO / POOL VIA AP)

TOKYO - Japanese Emperor Naruhito formally proclaimed his ascendancy to the throne on Tuesday in a centuries-old ceremony attended by dignitaries from more than 180 countries, pledging to fulfil his duty as a symbol of the state.

Naruhito became emperor in May in a brief, tradition-filled ceremony but Tuesday's "Sokui no Rei" was a more elaborate ritual at the royal palace in which he officially announced his change in status to the world.

I swear that I will act according to the constitution and fulfil my responsibility as the symbol of the state and of the unity of the people.

"I swear that I will act according to the constitution and fulfil my responsibility as the symbol of the state and of the unity of the people," the 59-year-old declared, his voice slightly hoarse, in front of about 2,000 participants, including Britain's Prince Charles.

"I sincerely hope that Japan will develop further and contribute to the friendship and peace of the international community, and to the welfare and prosperity of human beings through the people's wisdom and ceaseless efforts." 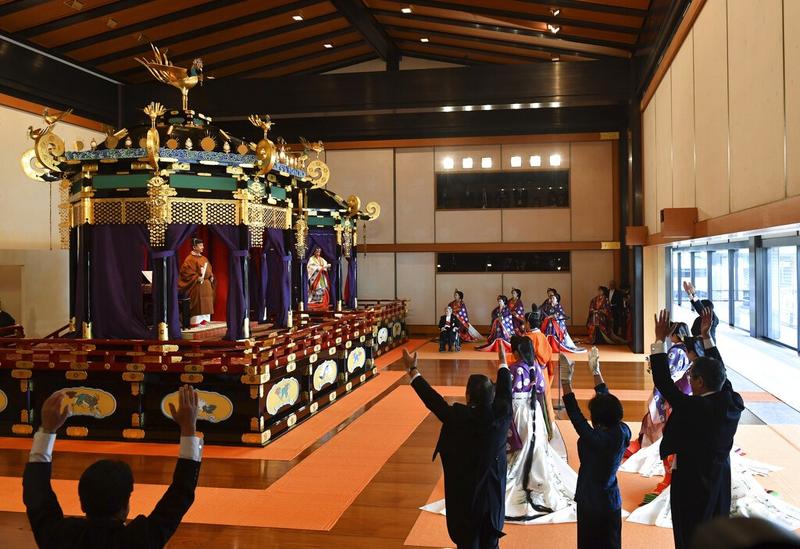 On the elevated platform, Emperor Naruhito, left, and Empress Masako, right, attend the enthronement ceremony where Naruhito officially proclaims his ascension to the Chrysanthemum Throne at the Imperial Palace in Tokyo on Oct 22, 2019. (KAZUHIRO NOGI / POOL PHOTO VIA AP)

The first Japanese emperor born after World War II, Naruhito acceded to the throne when his father, Akihito, became the first Japanese monarch to abdicate in two centuries after worrying that advancing age might make it hard to perform official duties.

"As he is young and energetic with outstanding leadership, I hope he'll support the people of Japan, which has faced continuous disasters and typhoons," said Tomoko Shirakawa, 51, who was waiting in front of the palace.

The long-planned celebrations were tempered by Typhoon Hagibis, which killed at least 82 people when it tore through Japan 10 days ago, and pouring rain on Tuesday.

A public parade was postponed until next month to allow the government to devote attention to the typhoon clean-up, while Tuesday's weather forced the palace to scale back the number of courtiers in ancient robes taking part in the courtyard ceremony.

But just before the ceremony began, the skies cleared and a rainbow appeared over Tokyo. 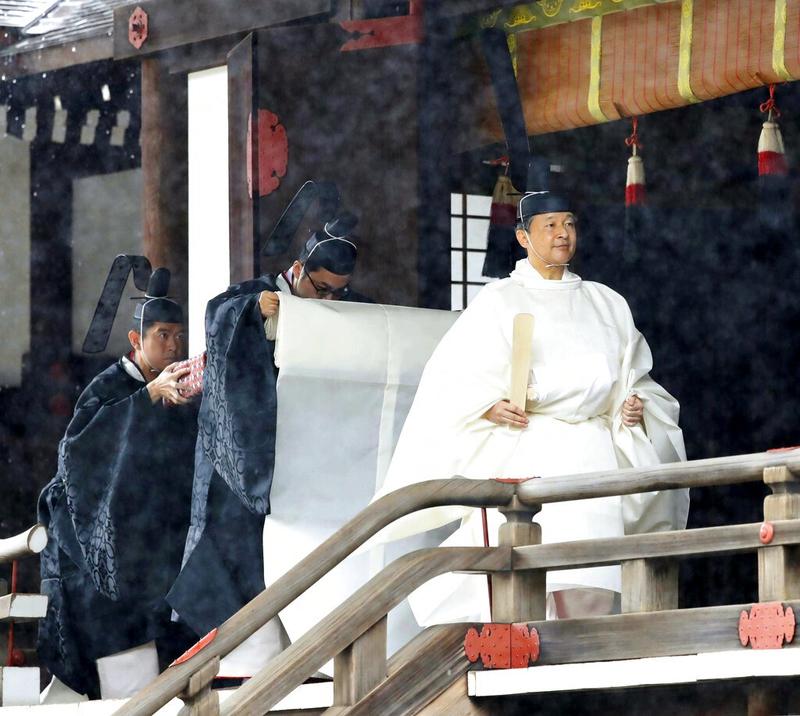 Japan's Emperor Naruhito, in a white robe, leaves after praying at “Kashikodokoro”, one of three shrines at the Imperial Palace, in Tokyo, Oct 22, 2019. (PHOTO / KYODO NEWS VIA AP)

At the sound of a gong in the Matsu-no-Ma, or Hall of Pine, the most prestigious room in the palace, two courtiers bowed deeply and drew back purple curtains on the "Takamikura" - a 6.5-meter high pavilion that weighs about 8 tonnes.

Naruhito was revealed standing in front of a simple throne, dressed in burnt-orange robes and a black headdress, with an ancient sword and a boxed jewel, two of the so-called Three Sacred Treasures, placed beside him. 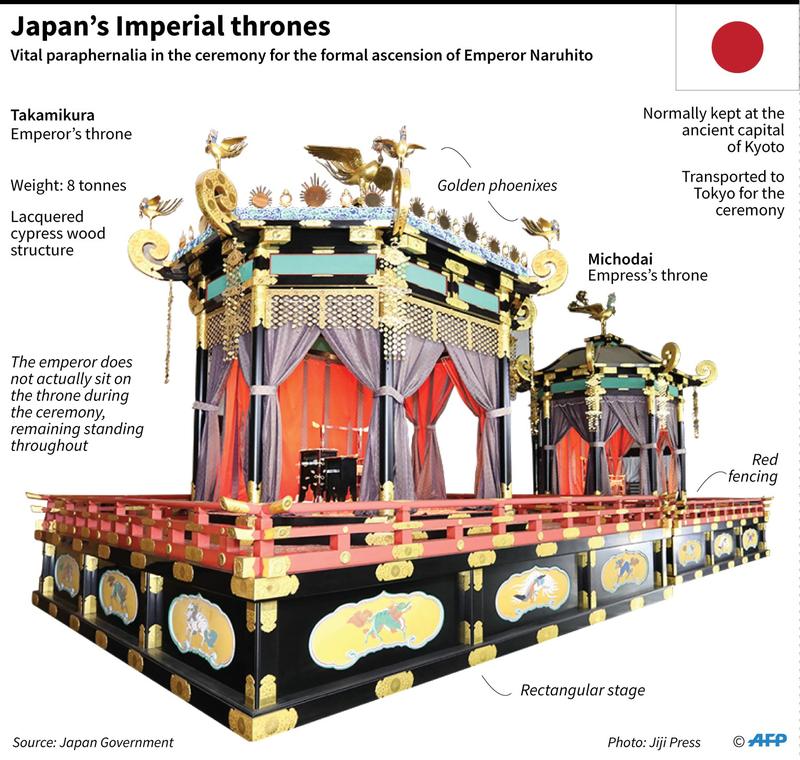 Fifty-five-year-old Empress Masako, wearing heavy 12-layered robes and with hair flowing down her back, stood in front of a smaller throne to the side. Such traditional robes can weigh around 15 kilograms. 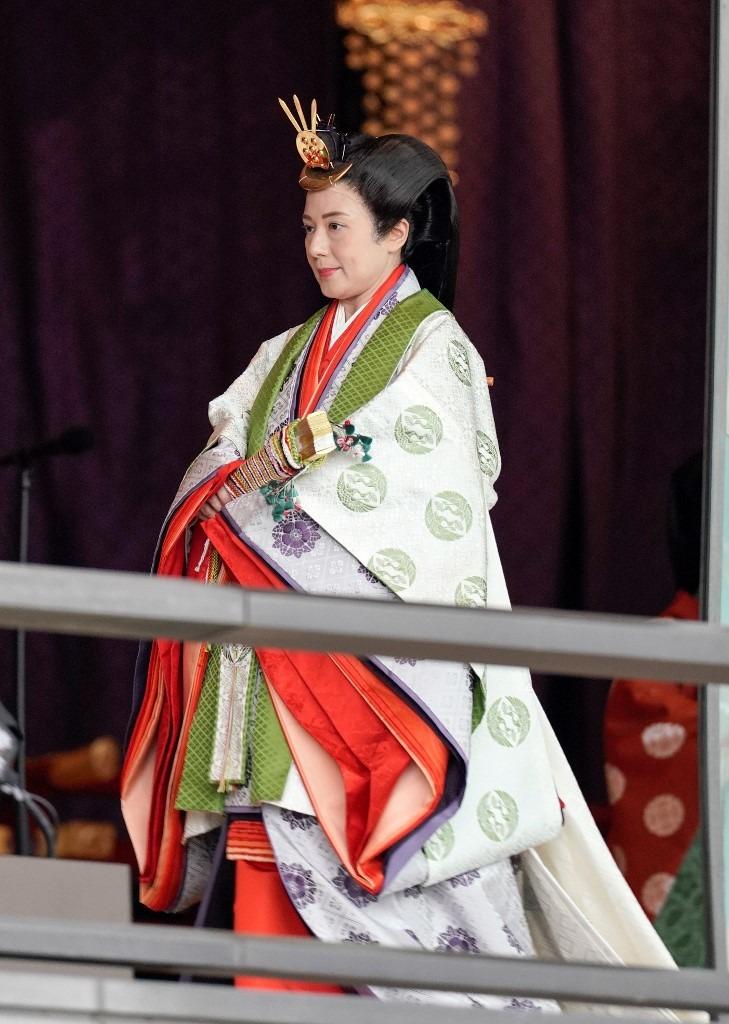 Abe led a trio of cheers of "banzai", or "long life", for the emperor, before a 21-gun salute.

Naruhito had earlier entered the palace to cheers from waiting fans before reporting his enthronement to his imperial ancestors at three shrines on the palace grounds, dressed in pure white robes. 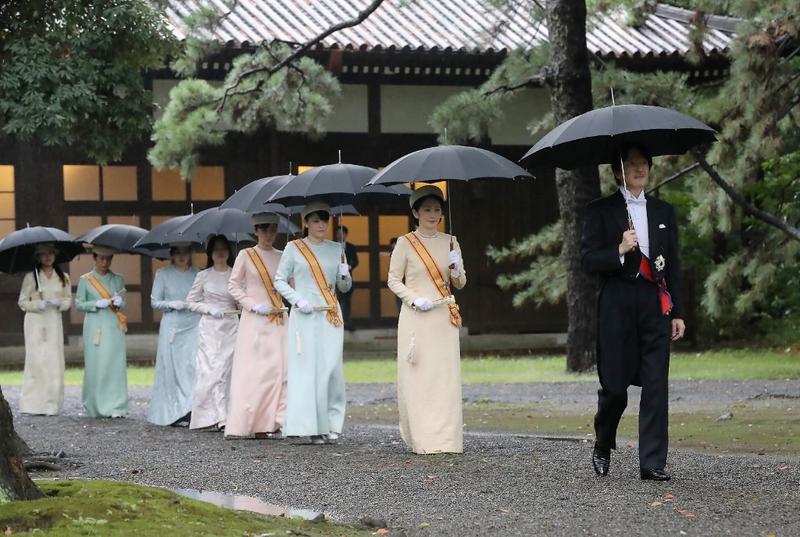 Japan's Crown Prince Akishino (right), his wife Crown Princess Kiko (2nd right) and other members of the imperial family arrive at the Imperial Palace sanctuaries where Emperor Naruhito will report the proclamation of his ascension to the throne in Tokyo on Oct 22, 2019. (PHOTO / STR / JIJI PRESS / AFP)

"As he is young and energetic with outstanding leadership, I hope he'll support the people of Japan, which has faced continuous disasters and typhoons," said Tomoko Shirakawa, 51, who was among the crowds of umbrella-clutching citizens packing the area in front of the palace.

A court banquet is due to be held on Tuesday evening, before Naruhito and Masako host a tea party for foreign royalty on Wednesday afternoon. The government pardoned about half a million people convicted of petty crimes, such as traffic violations, to mark the day.

Although the public parade was postponed until Nov 10, NHK public TV said there were 26,000 police providing security on Tuesday. 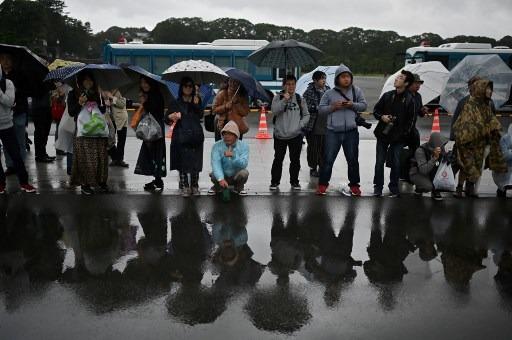 People stand near the Nijubashi gate at the Imperial Palace on the day Japan's Emperor Naruhito will officially proclaim his ascension to the Chrysanthemum Throne in Tokyo on Oct 22, 2019. (CHARLY TRIBALLEAU / AFP)

A court banquet is due to be held on Tuesday evening, before Naruhito and Masako host a tea party for foreign royalty on Wednesday afternoon.

While the public parade was postponed until Nov 10, the NHK national broadcaster said there were 26,000 police providing security on Tuesday.

Naruhito is unusual among recent Japanese emperors since his only child, 17-year-old Aiko, is female and as such cannot inherit the throne. The future of the imperial family for coming generations rests instead on the shoulders of his nephew, 13-year-old Hisahito, who is second in line for the throne after his father, Prince Akishino.

Naruhito's grandfather, Hirohito, in whose name Japanese troops fought World War II, was treated as a god but renounced his divine status after Japan's defeat in 1945. Emperors now have no political authority.