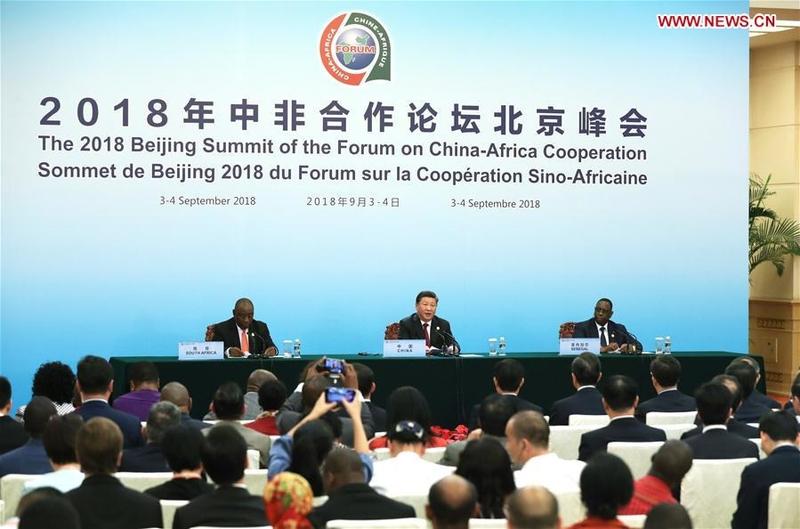 Chinese President Xi Jinping (center, back) meets the press together with South African President Cyril Ramaphosa (left, back) and Senegalese President Macky Sall, former and new African co-chair of the Forum on China-Africa Cooperation (FOCAC), after the conclusion of the 2018 FOCAC Beijing Summit at the Great Hall of the People in Beijing, capital of China, Sept 4, 2018. (LIU WEIBING / XINHUA)

BEIJING - The 2018 Beijing Summit of the Forum on China-Africa Cooperation (FOCAC) witnessed African leaders denounce accusations of "neo-colonialism" against China, reiterating the existence of a strong partnership between the continent and the world's second largest economy.

This week, more than 3,200 leaders and representatives from Africa and regional organizations gathered in Beijing to plan the next step in the win-win relationship between China and Africa.

China-Africa relations are gaining global attention, as their practical cooperation has brought about dramatic changes in the economic landscape across Africa and real benefits to both peoples.

For those who accuse China of "neo-colonialism," "plundering resources" and creating a "deb trap" in Africa, the Beijing summit has proven them wrong.

South African President Cyril Ramaphosa dismissed allegations of China acting in a colonialist fashion in Africa, saying China instead has been a partner in boosting social and economic development on the continent.

Djiboutian President Ismail Omar Guelleh also said that the Africa-China partnership is based on win-win cooperation and mutual benefits, in contrast to those allegations.

The continent's leaders sent out a clear signal that Africans are fully capable of deciding what's in their best interest.

It is patronizing to assume that Africans need to be "taken care of" because they don't know better.

Africans have had enough of the coddling and are expressing their frustrations online. They "categorically reject being cared for" by the West and are fed up with "constantly being belittled."

"Sorry to say this but the West treats Africans as objects of pity that need to be controlled like kids," said Danette Morara, whose comment on the question-and-answer website Quora was widely upvoted.

"The difference between the Chinese and any other country is their honesty," wrote Stone Atwine on the same thread. "They don't show up with a holier than thou attitude. They come for business, mutually beneficial business ... Some people show up with aid and 1,000 strings attached. We do not need aid, we need business."

"China wants markets, we have it," said Richard Ali. "Africa wants technological expertise, China has it. Give me China any day."

These African voices deserve to be heard. That's why China has taken a different approach to its partnership with Africa, one defined by equality, sincerity and real results.

These projects are aimed at the continent's sustainable, long-term economic and social development, as well as cultural and environmental preservation, to create a strong Africa for the future. Both China and Africa stand to benefit from this common effort.

Africa is a "land of great promise" and "full of hope" as President Xi said, and no one can hold back the Chinese and African people from realizing the continent's potential