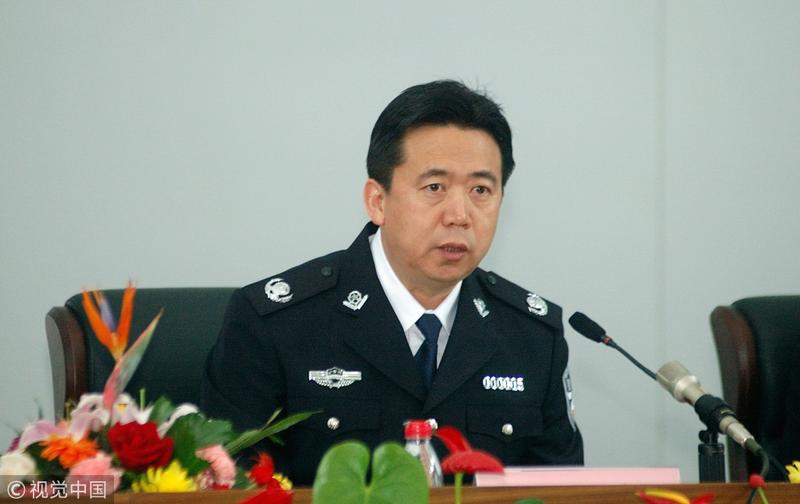 BEIJING - Meng Hongwei, former vice minister of public security, has been expelled from the Communist Party of China (CPC) and dismissed from public office over serious violations of Party discipline and laws, the top anti-graft body announced Wednesday.

The CPC Central Commission for Discipline Inspection (CCDI) and the National Supervisory Commission (NSC) said in a statement that the NSC first conducted an investigation of Meng's illegal conduct and found that he was also suspected of violations of the Party's code of conduct, which led to a CCDI investigation.

Meng's illicit gains should be confiscated, and his suspected crimes will be transferred to the procuratorate for further investigation and prosecution, according to a statement issued by the CCDO and NSC

The investigation found that Meng had completely lost his Party consciousness and sense of organizational rules. He failed to report relevant personal information to the Party and had refused to implement decisions of the CPC Central Committee, the statement read.

It noted that Meng entertained a serious prerogative mentality and used his power for personal purposes capriciously. He was also found to have lavished public funds for the extravagant life of his family.

The statement read that Meng used the influence of his posts to secure a job for his wife and let her take advantage of her posts to seek private benefits.

It further accused Meng of a "distorted idea for power" and of taking advantage of his posts to seek benefits regarding promotions, personnel arrangements and business operations for others, accepting huge amounts of money and gifts in exchange.

Meng severely violated the Party's political discipline and rules, as well as the Party's rules on frugality, organization, clean governance, work and life, the statement said, adding that he is also suspected of crimes of bribe-taking.

He showed no signs of restraint even after the 18th CPC National Congress, and his conduct seriously smeared the Party's image, undermined the country's interests and caused harmful influences, it read.

The statement noted his illicit gains should be confiscated, and his suspected crimes will be transferred to the procuratorate for further investigation and prosecution.