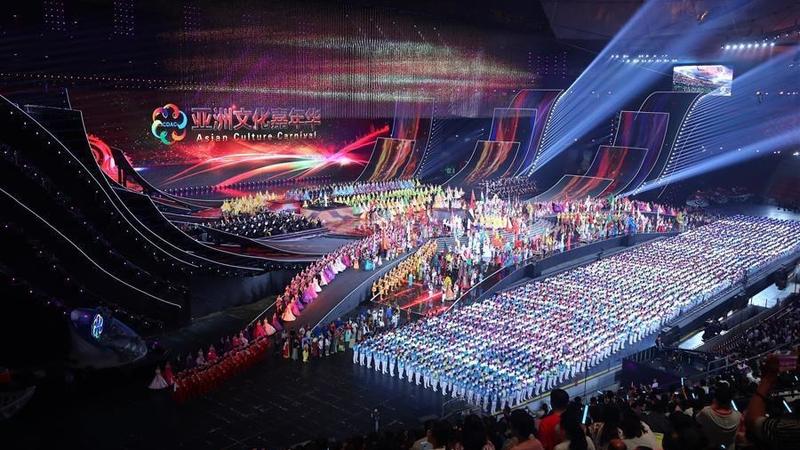 The choral and orchestral performance "Our Asia" is staged at the Asian culture carnival held during the Conference on Dialogue of Asian Civilizations (CDAC) at the National Stadium, or the Bird's Nest, in Beijing, capital of China, May 15, 2019. (Xinhua/Zhang Yuwei)

The concepts of mutual respect and coexistence among civilizations, highlighted by President Xi Jinping at the Conference on Dialogue of Asian Civilizations, received positive feedback from participants.

Xi said that exchanges and mutual learning among civilizations should be conducted in a reciprocal and equal manner, and should also be diversified and multidirectional

In his keynote speech made at the opening of the conference on Wednesday morning, Xi said that exchanges and mutual learning among civilizations should be conducted in a reciprocal and equal manner, and should also be diversified and multidirectional. He also encouraged that civilizations around the world be allowed to fully bloom.

Oraib Moh'd Raja Mohammad Alrantawi, founder and director general of the Al Quds Center for Political Studies, said he considered the most important point in the speech to be the notion of the equality of civilizations.

"We all have shared our creative and unique civilizations with each other, and nobody should say they have civilizational superiority," he said, adding that such a conference serves as a platform for attendees to exchange views on culture, religion and values.

Laurence Brahm, founding director of Himalayan Consensus and a senior fellow at the Center for China and Globalization, also highlighted the importance of mutual respect among civilizations.

"In our work and research, we find conflict, war and terror are not caused by clashes of civilizations. We observe that such conflicts arise when people are economically disempowered and their identities marginalized," Brahm said.

To end conflict, people need their own sustainable economic platform together with respect and protection of their heritage and culture, he said.

Brahm added that diversified civilizations are significant for the sustainable development of nations.

"The values of Asia are a unity that evolves into derivatives of multiplicity that are interconnected, multidimensional, interactive and synergistic," he said. "There is a sense of coexistence that is core to Asian cultures. There is no judgment for right or wrong, but rather acceptance of what is."

While sharing his experiences in advising on reforms in some Asian countries such as Laos and Vietnam, Brahm said that it's no use to force someone to develop based on a certain model. Instead, it's crucial to understand what the people need.

"We need more equality, and equal treatment by big countries toward small countries," he said, adding that diversity is very important as well.

Xu Wei contributed to this story.