Mahathir sworn in as Malaysian PM 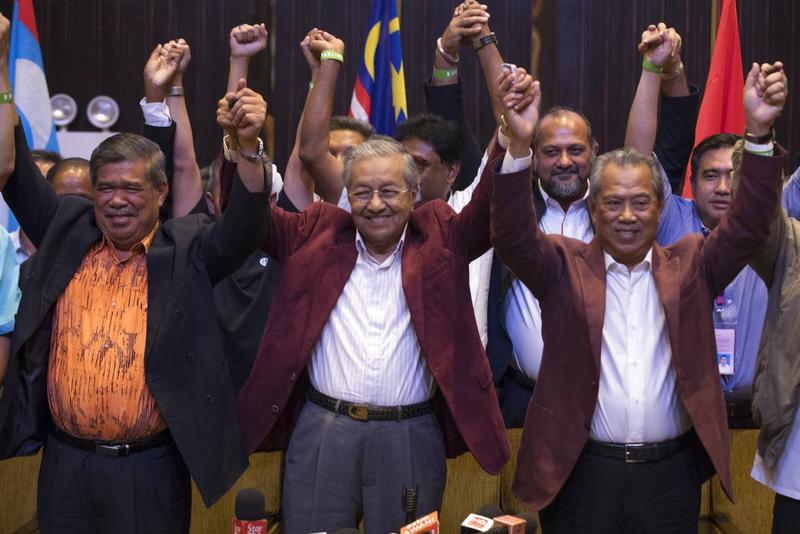 Mahathir Mohamad (center) celebrates with other leaders of his coalition during a press conference in Kuala Lumpur, Malaysia, May 9, 2018. Official results from Malaysia's general election show the opposition alliance led by the country's former authoritarian ruler Mahathir Mohamad has won a majority in parliament, ending the 60-year rule of the National Front. (VINCENT THIAN / AP)

KUALA LUMPUR - Mahathir Mohamad, 92, a former Malaysian Prime Minister who led the opposition to achieve a stunning victory in the general election, took the oath of office on Thursday night, becoming the world's oldest government leader.

There is an urgency here, we need to form the government now, today

Mahathir ruled Malaysia with an iron fist from 1981 to 2003 and now, with a second innings at the age of 92, is set to become the oldest elected leader in the world.

His alliance of four parties trounced the Barisan Nasional (BN) coalition of Prime Minister Najib Razak, who was once Mahathir's protege but became his most bitter rival.

Earlier on Thursday, Najib said he accepted "the verdict of the people" after his ruling coalition failed to secure a simple majority in a general election for the first time ever.

"There is an urgency here, we need to form the government now, today," Mahathir said.

The controller of Malaysia's royal household said the king has invited Mahathir to form the next government after receiving official election results. 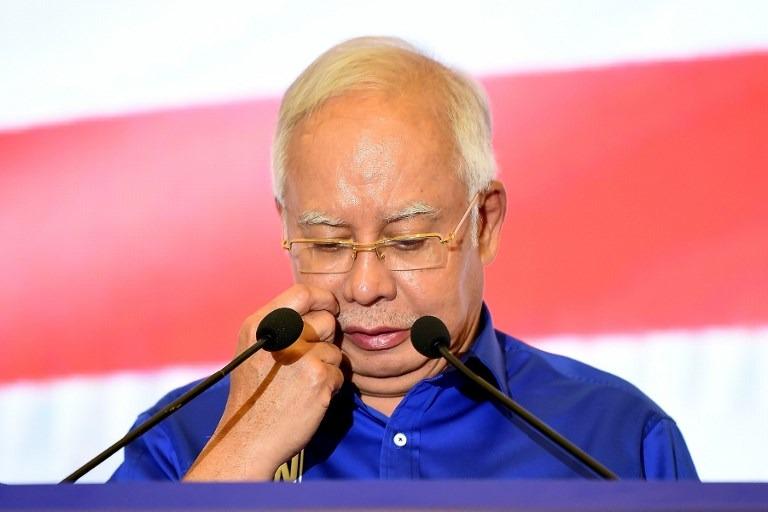 Outgoing Malaysian Prime Minister Najib Razak of the Barisan National party addresses the media after his party lost the 14th general election in Kuala Lumpur on May 10, 2018. (MOHD RASFAN / AFP)

Official results showed that Mahathir's coalition won 113 seats in the 222-seat parliament, one more than the number required to rule. But it has not been formally registered as an alliance.

In jubilant mood and cracking jokes, Mahathir he had been assured of support from a raft of parties that would give his government 135 members of parliament.

Malaysian markets were closed and will reopen only on Monday, but overseas investors were nervous about the ouster of Najib, who has been in power for nearly a decade. The ringgit lost four percent in offshore trading, while an overseas Malaysian equity fund showed a 6 percent drop in share values.

"This upset ranks up there with Brexit and the Trump election," said Aninda Mitra, a senior sovereign analyst at BNY Mellon Investment Management. "I believe the ringgit will come under pressure as policy continuity will come under a cloud." 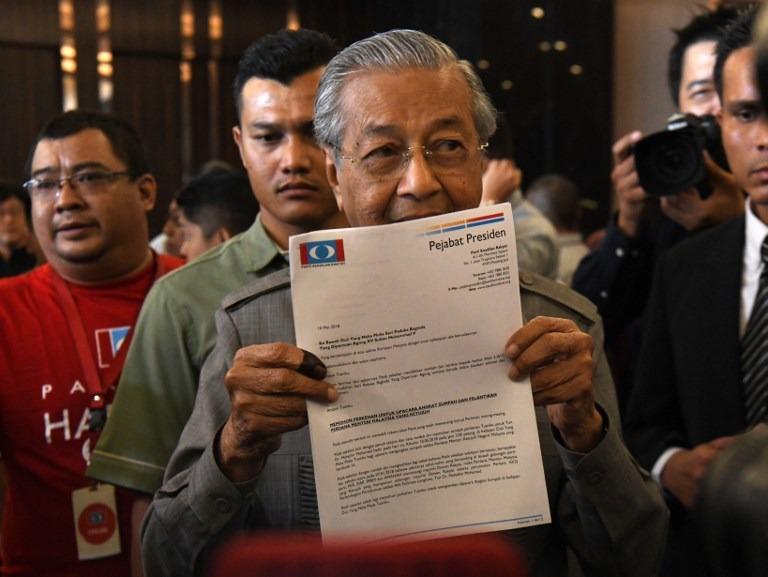 Former Malaysian prime minister and winning opposition candidate Mahathir Mohamad holds up a document addressed to the Yang di-Pertuan Agong, the nation's king, during a press conference in Kuala Lumpur on May 10, 2018. (ROSLAN RAHMAN / AFP)

The Malaysian central bank held its regular policy meeting as scheduled on Thursday, and kept the key overnight interest rate unchanged at 3.25 percent. The date for the meeting had been decided before the election was announced.

Mahathir repeated a promise to repeal a goods and services tax (GST) introduced by Najib and review foreign investments, including major infrastructure projects that are part of China's Belt and Road initiative.

Global ratings agency Moody's said some of his campaign promises, including scrapping GST and a reintroduction of fuel subsidies, could be credit-negative for Malaysia's sovereign debt rating.

Najib's BN coalition won 79 seats, a collapse from the 133 it won in the 2013 election, which was itself the coalition's worst poll performance ever at the time.

Few had expected Mahathir to prevail against a coalition that has long relied on the support of the country's ethnic-Malay majority.

However, he joined hands with jailed political leader Anwar Ibrahim, his one-time deputy he famously fell out with in 1998, and together their alliance exploited public disenchantment over the cost of living and a multi-billion-dollar scandal that has dogged Najib since 2015. 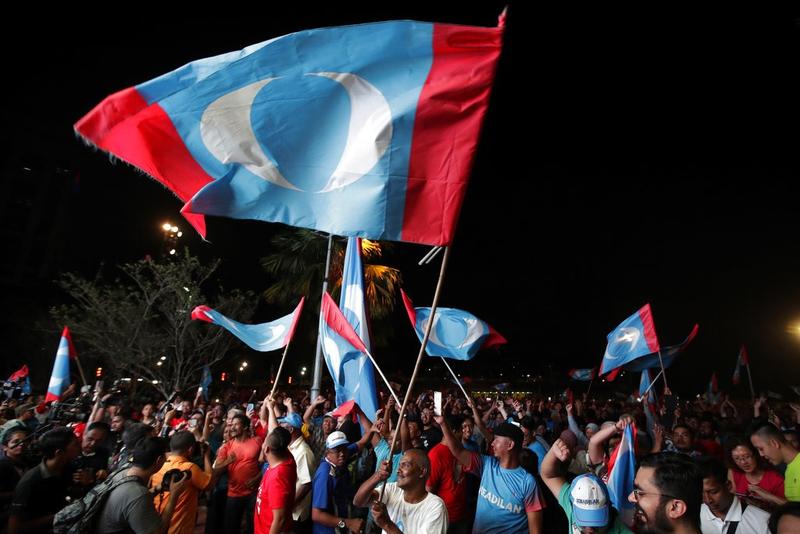 "This election has proved to us that we moved beyond racial politics," said Khoo Ying Hooi, a professor of international and strategic studies at the University of Malaya. "It's really people power through the ballot."

Mahathir said that one of his first actions would be to seek a royal pardon for Anwar. Before the poll he had promised to step aside once Anwar was free and let him become prime minister.

His wife, Wan Azizah Wan Ismail, was sitting next to Mahathir at the news conference. Under an agreement with Mahathir, she is to be deputy prime minister.

Anwar was imprisoned, first by Mahathir on charges of corruption and sodomy. He was released in 2004 but jailed again by Najib in 2015.

Mahathir and Najib were once allies but they clashed over a scandal around 1Malaysia Development Berhad (1MDB), a state fund from which billions of dollars were allegedly siphoned off.

The 1MDB affair is being investigated by at least six countries, although Najib has denied any wrongdoing and has been cleared by Malaysia's attorney-general.

Mahathir had vowed to investigate the scandal if elected and bring missing funds back to Malaysia. On Thursday he said that if Najib had done anything wrong he would "face the consequences". 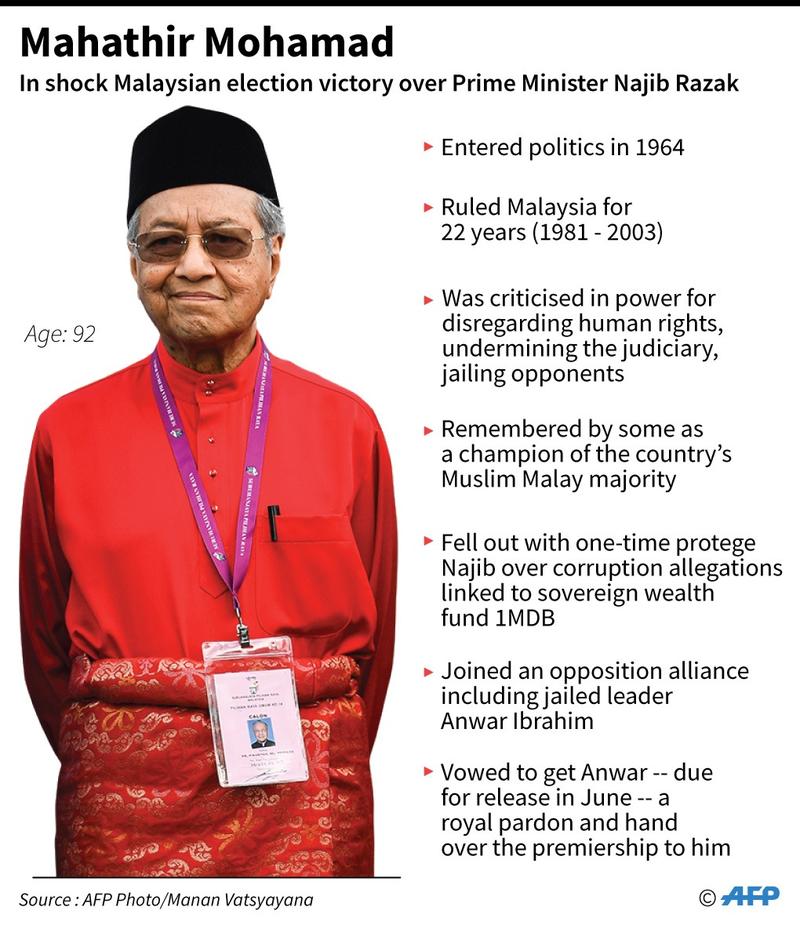