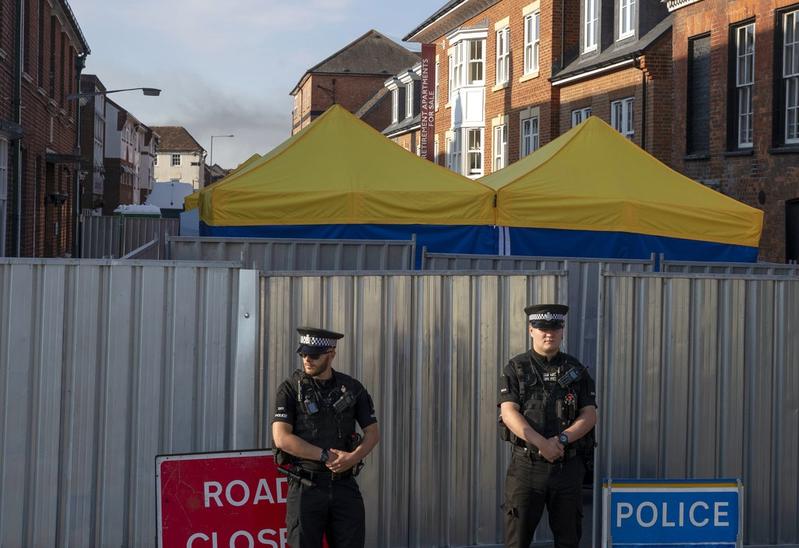 Police secure a point of interest in Salisbury, where counter-terrorism officers are investigating after a woman and her partner were exposed to the nerve agent Novichok, July 9, 2018. Police said this is now a homicide investigation after 44-year-old Dawn Sturgess died Sunday following her poisoning. (STEVE PARSONS/PA VIA AP)

LONDON — British police said Monday they believe the latest victims of poisoning by a nerve agent must have handled the material's container and been subjected to a "high dose" of the lethal poison.

Metropolitan Police Assistant Commissioner Neil Basu said the death of 44-year-old Dawn Sturgess on Sunday shows that she and partner Charlie Rowley, 45, were exposed to a large quantity of Novichok, a military-grade nerve agent produced in the Soviet Union during the Cold War.

Her (Dawn Sturgess’) death has only served to strengthen the resolve of the investigations team.

Basu said the working theory is that their exposure was linked to the earlier Novichok attack in March on ex-Russian spy Sergei Skripal and his daughter Yulia, who have both survived despite extended hospitalizations.

Britain has blamed Russia for the poisonings, but Moscow has strongly denied any involvement.

The wide investigation is now a homicide inquiry. Basu expressed sorrow for the death of Sturgess, who had three children.

"Her death has only served to strengthen the resolve of the investigations team," he said, saying the immediate police priority is to find any container that may be the source of the Novichok.

He said no one else in the Amesbury and Salisbury region where the couple lived in southwestern England has shown any sign of Novichok poisoning.

More than 100 police are working to try and search all areas where Sturgess and Rowley had been before they became ill nine days ago. The search is focused on their homes and a park in Salisbury. 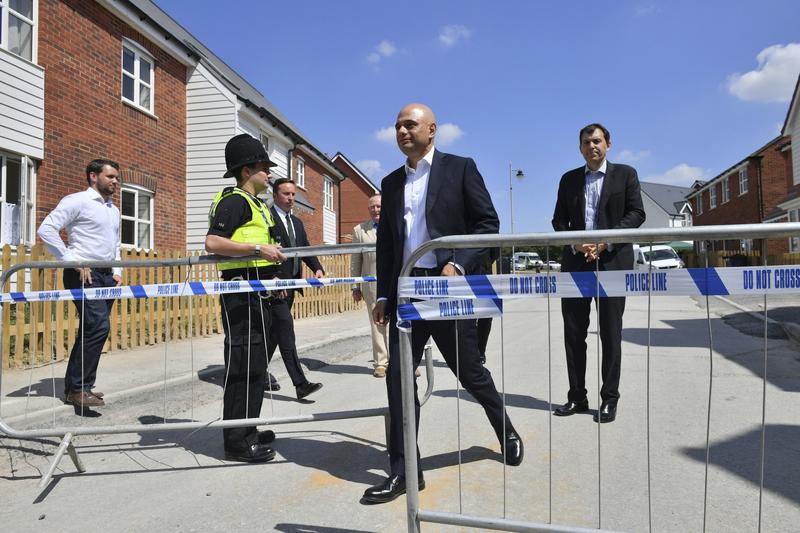 Britain's Home Secretary Sajid Javid, centre, exits the police cordon at Muggleton Road where counter-terrorism officers are investigating after a couple were left in a critical condition when they were exposed to the nerve agent Novichok, in Amesbury, England, July 8, 2018. Javid visited Amesbury and Salisbury in southwestern England to reassure residents that the risk to the public remains very low despite the recent poisoning of two people exposed to a deadly nerve agent. (BEN BIRCHALL / PA / AP)

Rowley remains in critical condition in a Salisbury hospital.

Britain blames the Russian state for the attack on Sergei Skripal and his 33-year-old daughter — an allegation Moscow has repeatedly denied.

Dmitry Peskov told reporters that Moscow "is deeply concerned" over the poisoning cases in Britain. Peskov added that such attacks present a danger not only inside the UK, but also in Europe as a whole.

Peskov said that linking Russia to the poisoning would be "absurd." 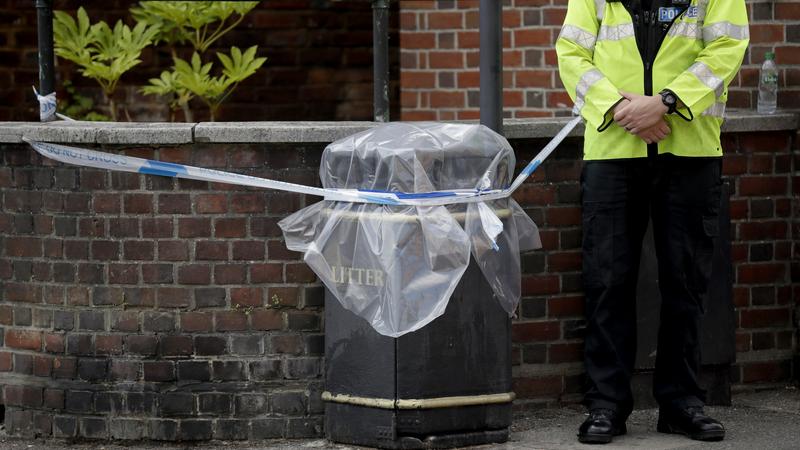 Asked whether the death could cloud the upcoming US-Russia summit in Helsinki next week, Peskov replied that the poisoning "has no relation" to the meeting. He said, "It's Britain's problem and the problem of how interested Britain is in a real investigation."

Moscow says London has declined its offers for a joint investigation into the poisonings.