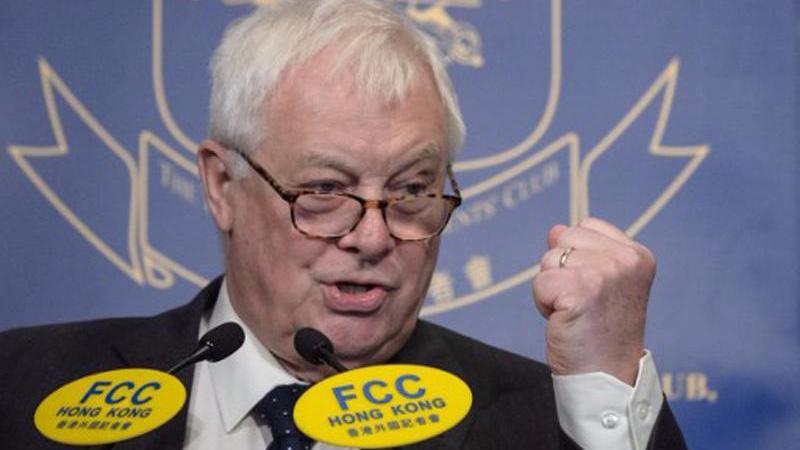 In the past week Hong Kong’s last governor before its return to China, Chris Patten, paid a four-day visit to the city. The official purpose of the incumbent Chancellor of the University of Oxford’s tour was to promote his new book. However, he seemed to be more keen on commenting on Hong Kong’s political affairs.

It is totally ok to have such a hobby – talking about the city which he said he has a special feeling for. But one should at least make consistent and logical arguments when trying to give comments.

On the sidelines of his speech at the city’s Foreign Correspondents’ Club on Tuesday, he said the sentence review applied by the Department of Justice (DoJ) on the radical student activist trio – Joshua Wong Chi-fung, Nathan Law Kwun-chung and Alex Chow Yong-kang – was a “political decision” and would jeopardize Hong Kong’s world-renowned reputation for the rule of law.

This statement even confused some reporters at the event. The three played a leading role in the storming the square in front of the government headquarters which triggered the illegal “Occupy Central” movement in 2014. The unlawful assembly involved hundreds of students and injured more than 10 security guards. It is apparent that they violated laws and created huge social disorder.

If society let this go, it would be difficult to stop future activists from storming any place as they can argue that any prosecution or punishment would be a “political decision”. What if they storm Patten’s residence someday?

The DoJ reviewed the verdict within Hong Kong’s legal system. The court’s rationale for approving the DoJ’s appeal for harsher punishments was listed in the judgment. As Patten has said, “the rule of law is one of the cornerstones of Hong Kong’s future development”, as he presents himself as an objective and rational figure, he should have respected the whole legal process.

Facing a question from China Daily over this point, he did not explain further and ended his answer by urging talks between relevant parties, which is, to many, “politically correct nonsense”. Actually, the Hong Kong government had arranged talks with student representatives during the “Occupy” protest and kept sound communication with the Legislative Council.

However, at a luncheon at the Hong Kong Democratic Foundation he said the activists were “principled young people” and “represent some of the values that helped make the world a better place”.

I think he knows clearly that part of the trio’s value was to break laws to realize their ideals. And I think he knows it was Wong who incited students to storm into the government premises. It is not easy to understand where this “principle” comes from.

Facing China Daily’s challenge on why he supported the activists who triggered violence, he did not answer directly. He just kept saying he supported democracy and never supported violence – to most reporters more “politically correct nonsense”.

He replied by saying: “The Basic Law said all sorts of things that shouldn’t be done in Hong Kong, like gay marriage and euthanasia. But that doesn’t stop people from talking about them.” More “politically correct nonsense”.

However, that is factually not the case. The Basic Law only deals with freedom of marriage, nothing on banning gay marriage. So it is for euthanasia.

On the contrary the very first article of the Basic Law stipulates that “the Hong Kong Special Administrative Region is an inalienable part of the People’s Republic of China”. I think a literate man should be able to figure out whether or not “Hong Kong independence” is illegal.

He mixed up the concepts – those banned and not banned in the law, “talking about” and “advocating” separatism.

I would say he is a decent man as he nodded goodbye to me after having a confrontation with me at the question and answer session. But I don’t know how many Hong Kong people have been fooled by his decency and artful wording. Maybe that is how certain politicians make their living.

Before meeting him, I thought Patten really loves Hong Kong and sees it as his second home. But I was wrong. This time I was confused by his hypocrisy.