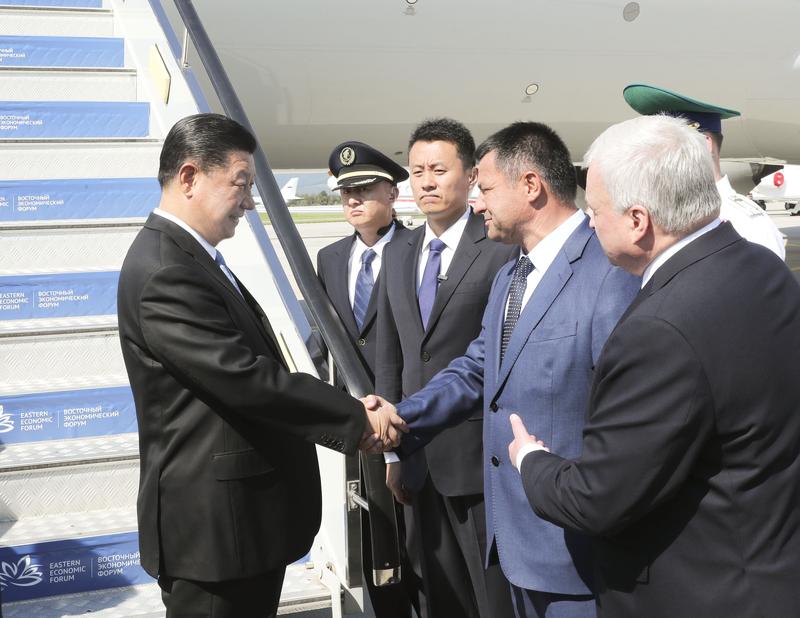 Chinese President Xi Jinping, left, is greeted by Russian officials as he arrives in Vladivostok, Russia, on Sept 11, 2018, for the fourth Eastern Economic Forum. (PHOTO / XINHUA)

The two leaders made the pledge when they held talks in Russian port city of Vladivostok.

Xi arrived in Vladivostok earlier today for the fourth Eastern Economic Forum at the invitation of Putin.

During his seventh trip to Russia since 2013, Xi Jinping is scheduled to attend several bilateral and multilateral events, including his third meeting with Vladimir Putin this year

It is the first time for the Chinese head of state to attend the EEF.

When he landed at the Vladivostok International Airport, Xi was warmly welcomed by senior Russian officials, as well as Chinese Ambassador to Russia Li Hui.

The EEF opened Tuesday, as world leaders and business tycoons gathered in the Russian Far Eastern port city to discuss cooperation at the event.

Themed "The Russian Far East: Expanding the Range of Possibilities," this year’s forum will run through Thursday.

The participants will share their ideas on topics of international cooperation in Far Eastern development, industry priorities in the Far East, tools to support investors and measures to improve living conditions.

There will be also cultural, sports and educational programs during the forum.

Founded by Putin in 2015, the annual EEF has served as an important venue for face-to-face dialogue among politicians, business executives and experts for Far Eastern development and regional cooperation.

During his seventh trip to Russia since 2013, Xi is scheduled to attend several bilateral and multilateral events, including his third meeting with Putin this year.

The two heads of state will also attend some activities on people-to-people exchanges and economic and local cooperation. Xi will deliver a speech at the annual meeting of the forum, and meet with some other state leaders.