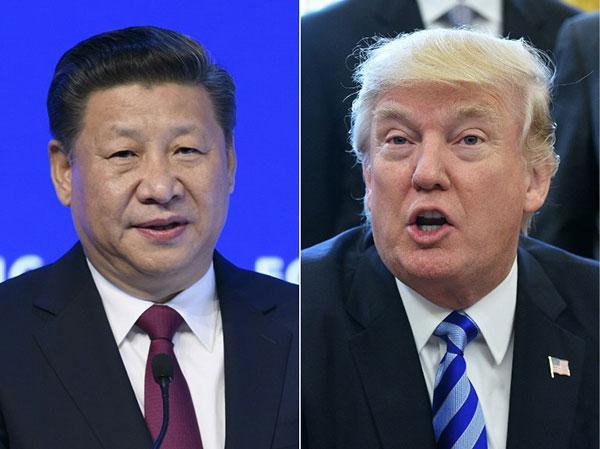 This photo combination created on March 30, 2017 shows Chinese President Xi Jinping (left) delivering a speech on the opening day of the World Economic Forum, on Jan 17, 2017 in Davos, and US President Donald Trump announcing the final approval of the XL Pipline in the Oval Office of the White House on March 24, 2017 in Washington, DC. (MANDEL NGAN, FABRICE COFFRINI / AFP)

BEIJING - Chinese President Xi Jinping urged concerned parties to practice restraint regarding the Korean Peninsula nuclear issue in a phone conversation with his US counterpart Donald Trump on Saturday.

The concerned parties should avoid remarks and actions that could escalate tensions on the Korean Peninsula, Xi said, adding China is ready to work with the United States to appropriately resolve the issue.

Xi stressed that China and the United States have common interests in achieving denuclearization on the Korean Peninsula and maintaining peace and stability there.

The concerned parities should strive to resolve the issue through dialogue and negotiation to reach a political solution, Xi said.

China is willing to keep close contacts with the United States, on the basis of mutual respect, to seek a sound settlement on the issue

China is willing to keep close contacts with the United States, on the basis of mutual respect, to seek a sound settlement on the issue, he added.

Xi said he had a productive meeting with President Trump on the sidelines of the Group of 20 Summit last month in Hamburg, Germany.

Maintaining close contacts between the two leaders on issues of common concern is "very important for the development of the China-US relations," Xi added.

He urged the two sides to enhance dialogue and communication in accordance with the consensus previously reached, promote exchanges and cooperation in various fields, and appropriately deal with each other's concerns, so as to ensure healthy and stable advancement of bilateral ties.

Furthermore, the Chinese president said that Beijing places high value on Trump's state visit to China later this year, urging both sides to make good preparations for the visit.

Trump, for his part, also stressed the importance of maintaining close contacts between the two leaders on major issues and strengthening exchanges between their countries at all levels as well as in various areas.

The development of US-China relations enjoys good momentum, he noted, voicing his belief that bilateral ties could be better.

The US president also said that he is looking forward to his state visit to China.

On the Korean nuclear issue, Trump said the United States fully understands China's efforts in resolving it, and is willing to continue to keep close contacts with Beijing on major international and regional issues of common concern.