US officials urged to stop meddling in HK affairs 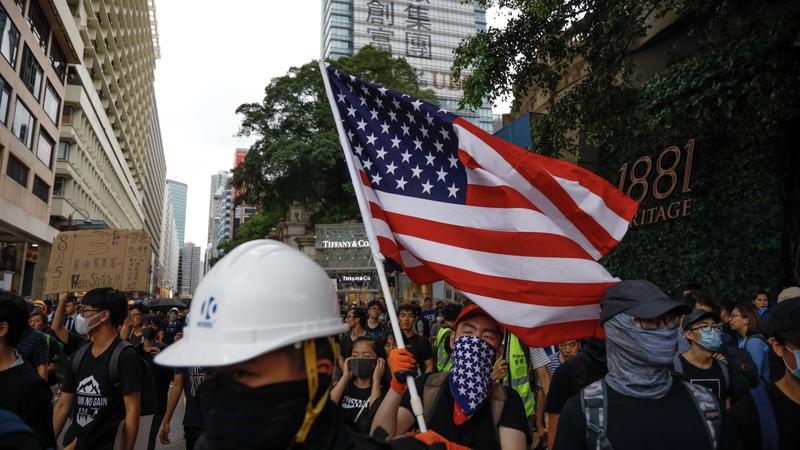 American flag are seen at a protest about anti-extradition bill in Tsim She Tsui on Aug 3, 2019. (ROY LIU / CHINA DAILY)

China asked the United States on Thursday to clarify media reports about a US official’s meeting with major Hong Kong independence activists, urging it to stop sending “wrong signals” to the violent lawbreakers in the country’s special administrative region.

The Office of the Commissioner of the Ministry of Foreign Affairs in the Hong Kong Special Administrative Region urgently summoned a senior official at the US Consulate General, urging US officials to immediately make a clean break from anti-China forces who stir up trouble in Hong Kong, to refrain from meddling in Hong Kong affairs and to avoid going further down the wrong path, according to a statement on the office’s website.

Julie Eadeh, a political counselor at the US Consulate General in Hong Kong, was reported to have met Hong Kong separatist leaders in a hotel in Hong Kong on Tuesday. They include Joshua Wong Chi-fung, one of the ringleaders of the 2014 Occupy Movement.

China is firm in upholding national sovereignty and security and Hong Kong’s prosperity and stability, and in opposing any interference in Hong Kong affairs by any country, organization or individual in whatever form

China is firm in upholding national sovereignty and security and Hong Kong’s prosperity and stability, and in opposing any interference in Hong Kong affairs by any country, organization or individual in whatever form, the statement said.

The US government stepped up its warnings to US travelers to Hong Kong on Wednesday by updating its travel advisory to Level 2, which urges travelers to “exercise increased caution” while in Hong Kong.

The new travel advisory issued by the US will cause another blow to Hong Kong’s economy, which has already been seriously dented by the recent mayhem in which the US also played a role, Lau said.

Brave Chan Yung, a Hong Kong deputy to the National People’s Congress, the nation’s top legislature, refuted the “evil” US agenda to undermine Hong Kong’s stability for its own interests.

News reports and historical records have revealed that the US has been behind Hong Kong’s recent unrest and many other “color revolutions” around the world, Chan said.

Lam Chi-ting, general secretary of the Federation of Hong Kong Trade Unions in Tourism - the tourism industry branch of the city’s largest labor union - said the US move is an attempt to hammer Hong Kong’s tourism industry, which is one of Hong Kong’s major economic sectors, and further restrain the development of China.

Tourism is a fragile business sector and is easily affected by external factors such as social instability. As more than 800,000 people are employed in the tourism and retailing industry, if the industry crashed in Hong Kong, related sectors would be affected, damaging the special administrative region’s whole economy, Lam said.

He added that although Western tourists make up less than 10 percent of Hong Kong’s tourism market, the US move to raise the travel advisory for Hong Kong will dampen global sentiment to travel to the city and other Western countries may follow suit.

In July, roughly a month after the protests began, the number of tour groups traveling to Hong Kong has slumped amid the city’s violent clashes and mass rallies. Tours from the Chinese mainland, which account for about three-fourths of Hong Kong’s tourism market, dropped by 40 percent, according to Lam.

From last month, tour groups from Southeast Asia have fallen around 85 percent. There have been no new bookings for tour groups in September, according to Ricky Tse Kam-ting, founding president of the Hong Kong Inbound Tour Operators Association.