Stephen Hawking, tourist of the universe, no more 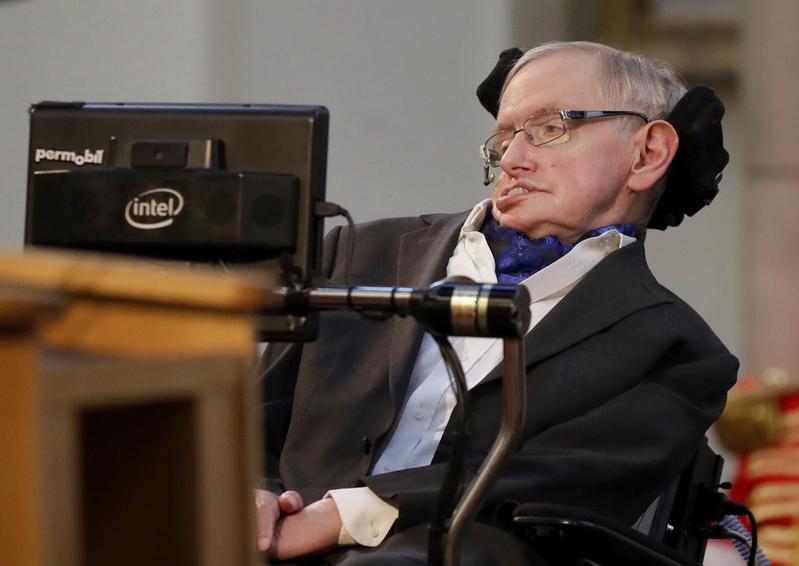 In this March 6, 2017 file photo, British scientist Stephen Hawking delivers a keynote speech as he receives the Honorary Freedom of the City of London during a ceremony at the Guildhall in the City of London. Hawking has died at the age of 76, a family spokesman said on March 14, 2018. (MATT DUNHAM / AP)

PARIS/LONDON — In his final years, the only thing connecting the brilliant physicist to the outside world was a couple of inches of frayed nerve in his cheek.

As slowly as a word per minute, Stephen Hawking used the twitching of the muscle under his right eye to grind out his thoughts on a custom-built computer, painstakingly outlining his vision of time, the universe, and humanity's place within it.

What he produced was a masterwork of popular science, one that guided a generation of enthusiasts through the esoteric world of anti-particles, quarks, and quantum theory. His success in turn transformed him into a massively popular scientist, one as familiar to the wider world through his appearances on "The Simpsons" and "Star Trek" as his work on cosmology and black holes.

Even though his body was attacked by amyotrophic lateral sclerosis when Stephen Hawking was 21, he stunned doctors by living with the normally fatal illness for more than 50 years

Hawking owed one part of his fame to his triumph over amyotrophic lateral sclerosis, or ALS, a degenerative disease that eats away at the nervous system. When he was diagnosed aged only 21, he was given only a few years to live.

But he defied the normally fatal illness for more than 50 years, pursuing a brilliant career that stunned doctors and thrilled his fans. Even though a severe attack of pneumonia left him breathing through a tube, an electronic voice synthesizer allowed him to continue speaking, albeit in a robotic monotone that became one of his trademarks.

He carried on working into his 70s, spinning theories, teaching students, and writing "A Brief History of Time," an accessible exploration of the mechanics of the universe that sold millions of copies.

By the time he died Wednesday at 76, Hawking was among the most recognizable faces in science, on par with Albert Einstein.

"He was a great scientist and an extraordinary man whose work and legacy will live on for many years. His courage and persistence with his brilliance and humor inspired people across the world. He once said: ‘It would not be much of a universe if it wasn’t home to the people you love.’ We will miss him forever," his children Lucy, Robert and Tim said in a statement.

As one of Isaac Newton's successors as Lucasian Professor of Mathematics at Cambridge University, Hawking was involved in the search for the great goal of physics — a "unified theory."

Such a theory would resolve the contradictions between Einstein's General Theory of Relativity, which describes the laws of gravity that govern the motion of large objects like planets, and the Theory of Quantum Mechanics, which deals with the world of subatomic particles.

For Hawking, the search was almost a religious quest — he said finding a "theory of everything" would allow mankind to "know the mind of God."

In later years, though, he suggested a unified theory might not exist.

He followed up "A Brief History of Time" in 2001 with the sequel, "The Universe in a Nutshell," which updated readers on concepts like supergravity, naked singularities and the possibility of an 11 —dimensional universe.

Hawking said belief in a God who intervenes in the universe "to make sure the good guys win or get rewarded in the next life" was wishful thinking.

"But one can't help asking the question: Why does the universe exist?" he said in 1991. "I don't know an operational way to give the question or the answer, if there is one, a meaning. But it bothers me." 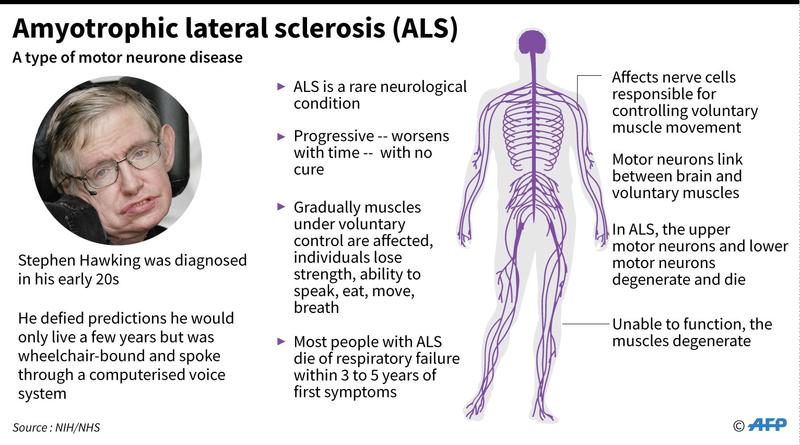 Hawking often credited humor with helping him deal with his disability, and it was his sense of mischief that made him game for a series of stunts.

He made cameo television appearances in "The Simpsons," ''Star Trek," and the "Big Bang Theory" and counted among his fans U2 guitarist The Edge, who attended a January 2002 celebration of Hawking's 60th birthday.

His early life was chronicled in the 2014 film "The Theory of Everything," with Eddie Redmayne winning the best actor Academy Award for his portrayal of Hawking. The film focused still more attention on Hawking's remarkable life.

Some colleagues credited that celebrity with generating new enthusiasm for science.

His achievements, and his longevity, also helped prove to many that even the most severe disabilities need not stop patients from achieving.

Richard Green, of the Motor Neurone Disease Association — the British name for ALS — said Hawking met the classic definition of the disease, as "the perfect mind trapped in an imperfect body." He said Hawking had been an inspiration to people with the disease for many years.

Hawking's disability did slow the pace of conversation, especially in later years as even the muscles in his face started to weaken. Minutes could pass as he composed answers to even simple questions. Hawking said that didn't impair his work, even telling one interviewer it gave his mind time to drift as the conversation ebbed and flowed around him. 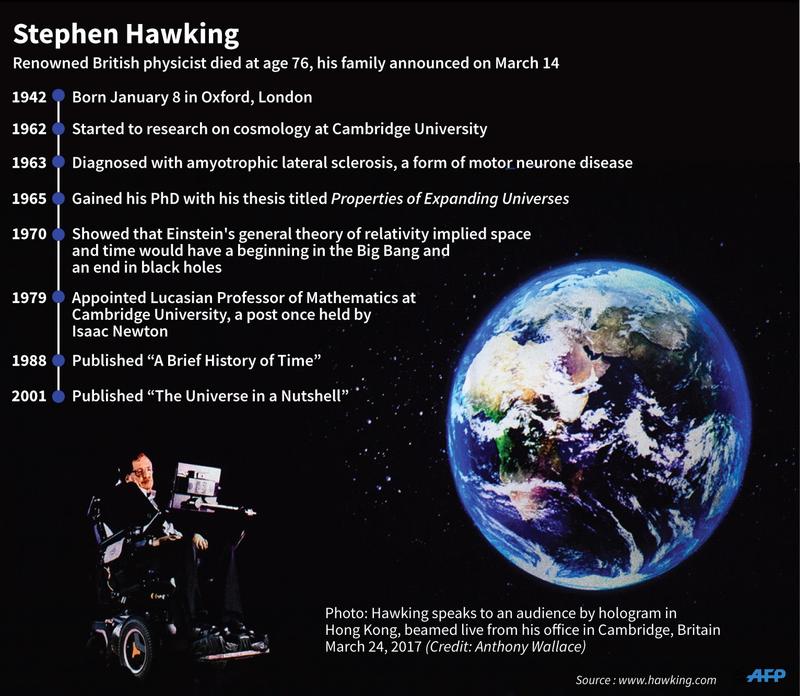 His near-total paralysis certainly did little to dampen his ambition to physically experience space: Hawking savored small bursts of weightlessness in 2007 when he was flown aboard a jet that made repeated dives to simulate zero-gravity.

Hawking had hoped to leave Earth's atmosphere altogether someday, a trip he often recommended to the rest of the planet's inhabitants.

Hawking first earned prominence for his theoretical work on black holes. Disproving the belief that black holes are so dense that nothing could escape their gravitational pull, he showed that black holes leak a tiny bit of light and other types of radiation, now known as "Hawking radiation."

Hawking's other major scientific contribution was to cosmology, the study of the universe's origin and evolution. Working with Jim Hartle of the University of California, Santa Barbara, Hawking proposed in 1983 that space and time might have no beginning and no end. "Asking what happens before the Big Bang is like asking for a point one mile north of the North Pole," he said.

In 2004, he announced that he had revised his previous view that objects sucked into black holes simply disappeared, perhaps to enter an alternate universe. Instead, he said he believed objects could be spit out of black holes in a mangled form.

Hawking was born Jan 8, 1942, in Oxford, and grew up in London and St Albans, northwest of the capital. In 1959, he entered Oxford University and then went on to graduate work at Cambridge.

Signs of illness appeared in his first year of graduate school, and he was diagnosed with ALS, also known as Lou Gehrig's disease after the New York Yankee star who died of it. The disease usually kills within three to five years.

According to John Boslough, author of "Stephen Hawking's Universe," Hawking became deeply depressed. But as it became apparent that he was not going to die soon, his spirits recovered and he bore down on his work. 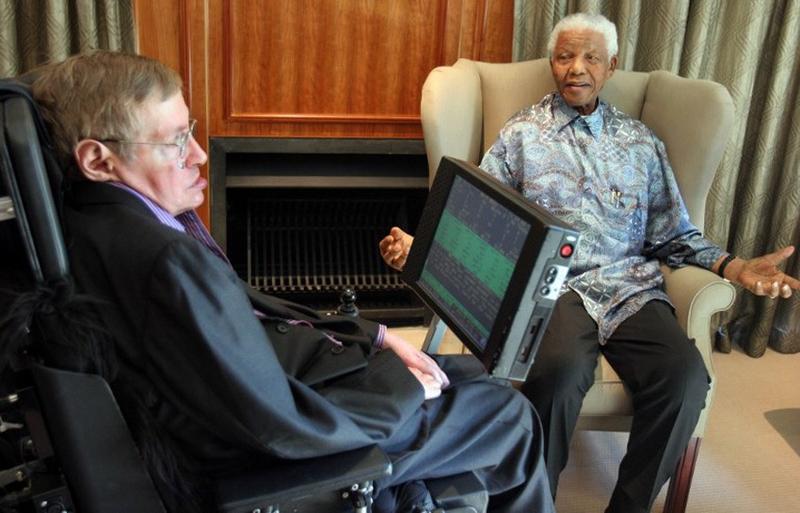 Brian Dickie, director of research at the Motor Neurone Disease Association, said only 5 percent of those diagnosed with ALS survive for 10 years or longer. Hawking, he added, "really is at the extreme end of the scale when it comes to survival."

Hawking married Jane Wilde in 1965 and they had three children, Robert, Lucy and Timothy.

Jane cared for Hawking for 20 years, until a grant from the United States paid for the 24-hour care he required.

He was inducted into the Royal Society in 1974 and received the Albert Einstein Award in 1978. In 1989, Queen Elizabeth II made him a Companion of Honor, one of the highest distinctions she can bestow.

He whizzed about Cambridge at surprising speed — usually with nurses or teaching assistants in his wake — traveled and lectured widely, and appeared to enjoy his fame. He retired from his chair as Lucasian Professor in 2009 and took up a research position with the Perimeter Institute for Theoretical Physics in Waterloo, Ontario.

Hawking divorced Jane in 1991, an acrimonious split that strained his relationship with their children. Writing in her autobiographical "Music to Move the Stars," she said the strain of caring for Hawking for nearly three decades had left her feeling like "a brittle, empty shell." Hawking married his one-time nurse Elaine Mason four years later, but the relationship was dogged by rumors of abuse. 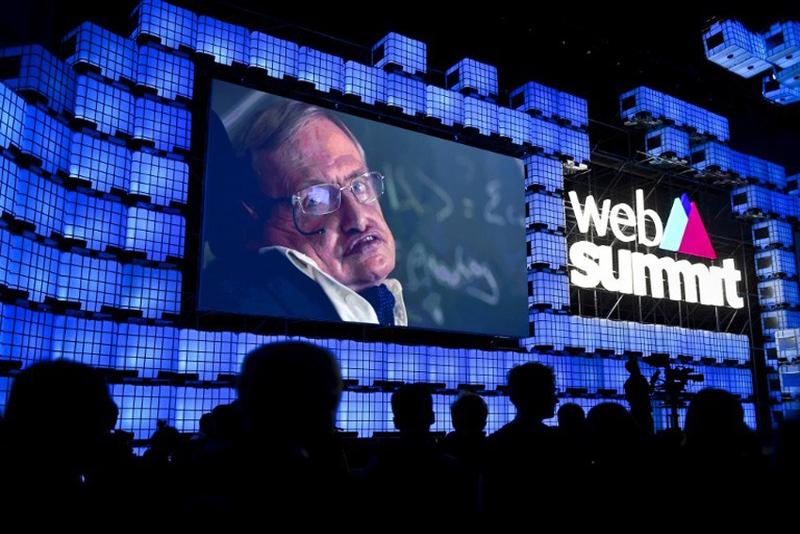 In this Nov 6, 2017 photo, Stephen Hawking delivers a video message during the opening ceremony of the 2017 Web Summit in Lisbon. (PATRICIA DE MELO MOREIRA / AFP)

Lucy Hawking said her father had an exasperating "inability to accept that there is anything he cannot do."

"I accept that there are some things I can't do," he told The Associated Press in 1997. "But they are mostly things I don't particularly want to do anyway."

Then, grinning widely, he added, "I seem to manage to do anything that I really want."

Reacting to Hawking’s death, Tim Berners-Lee, the inventor of the World Wide Web, said: "We have lost a colossal mind and a wonderful spirit. Rest in peace, Stephen Hawking."

NASA tweeted: "His theories unlocked a universe of possibilities that we and the world are exploring. May you keep flying like superman in microgravity, as you said to astronauts on @Space_Station in2014."

Hugo Award-winning author Liu Cixin expressed his grief over the death of Hawking. "There are people who can only flicker their eyelids, but their thoughts may travel far into space. There are those whose bodies are robust and strong, but their minds are weak, and they are destined to live their entire lives dependent on others," the science-fiction writer said.

"Professor Hawking was a unique individual who will be remembered with warmth and affection not only in Cambridge but all over the world. His exceptional contributions to scientific knowledge and the popularization of science and mathematics have left an indelible legacy,” said Professor Stephen Toope, Vice-Chancellor of the University of Cambridge.

“His character was an inspiration to millions. He will be much missed.”