Scientists hit back against tidal wave of microplastics 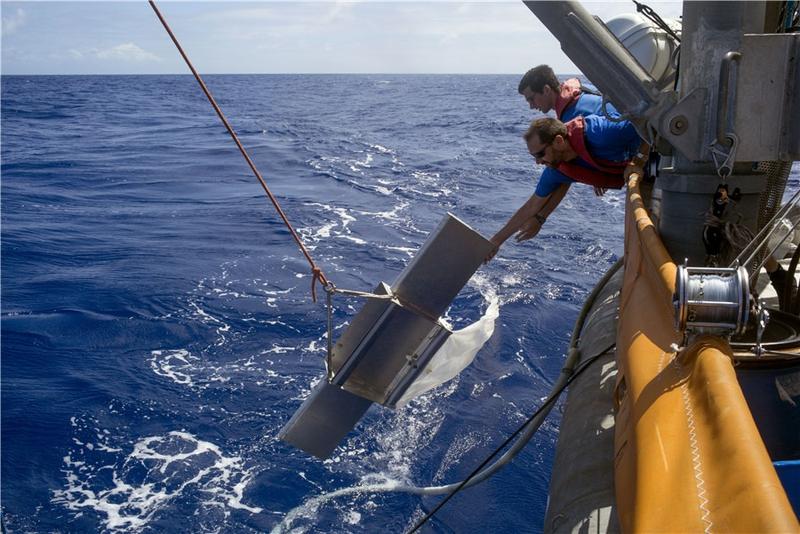 When marine biologist Edward Carpenter was on a research cruise in the North Atlantic Ocean's Sargasso Sea in 1971, he discovered plastic particles floating amid the seaweed in concentrations averaging 3,500 pieces per square kilometer.

The following year, Carpenter published the first observations of what are now known as microplastics in the journal Science. He noted, "increasing production of plastics, combined with present waste-disposal practices, will undoubtedly lead to increases in the concentration of these particles".

Dubbed the "PM 2.5 of the ocean", the small size of microplastics means they can easily be eaten by marine animals

His prediction was correct, but it caused little concern until an increasing amount of evidence turned up over the past decade illustrating that microplastics have spread across the oceans, threatening marine life and humans alike.

At a national academic conference on microplastics pollution and control in Nanjing, Jiangsu province, on June 5 and 6, more than 500 scholars presented their findings and discussed the issue ahead of World Oceans Day on June 8.

Researchers define microplastics as particles with diameters ranging from less than 5 millimeters, about the size of a grain of rice, to just a few microns, about one-hundredth the diameter of a human hair.

To better identify sources, microplastics are divided into two categories based on their formation process - primary and secondary. The former are plastics that are inherently small, such as industrial scrubbers used to blast surfaces clean, plastic powders used in moldings, and micro beads found in cosmetics, toothpaste and facial wash.

Secondary microplastics are produced by the fragmentation and weathering of larger items, such as plastic fibers shed from synthetic clothing, small pieces of nets and foam boxes in the fishing industry, and plastic litter on beaches. Though plastic decomposes slowly, it ages under sunlight before breaking down into ever-smaller pieces in the natural environment.

"Almost all the plastic waste in our daily lives will eventually turn into microplastics," said Pan Xiangliang, director of the Environmental Microplastics Pollution Research Center at Zhejiang University of Technology in Hangzhou, capital of Zhejiang province. 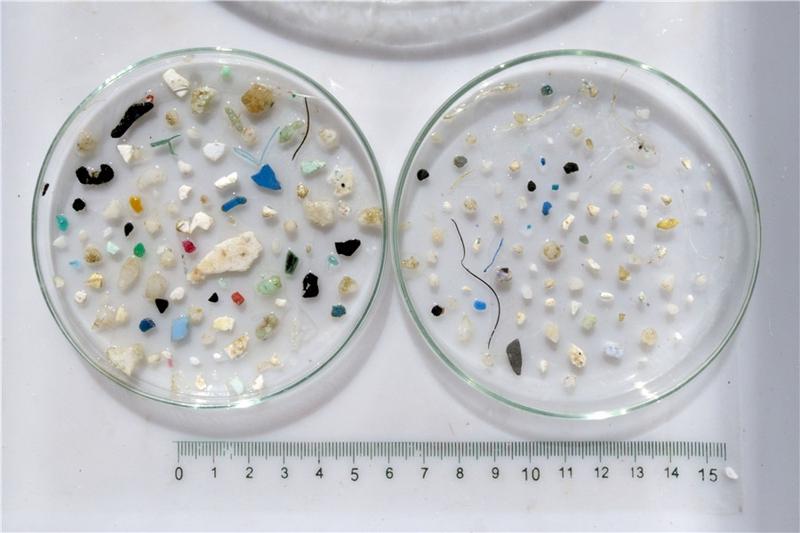 Dubbed the "PM 2.5 of the ocean", the small size of microplastics means they can easily be eaten by marine animals. In May, a study discovered that baby fish in nurseries off Hawaii eat microplastics shortly after they are born, which lowers their chances of survival and ultimately affects the fishing industry.

Other studies have discovered microplastics in mussels, fish and seals, suggesting they may move up the ocean food chain from prey to predator.

Other studies have discovered microplastics in mussels, fish and seals, suggesting they may move up the ocean food chain from prey to predator

Pan's study focuses on the toxicology of microplastics. "There are too many things in a piece of plastic, and that's what makes it harmful," he said, adding that plastic fragments include additives such as plasticizers, flame retarders and coloring pigments, all of which are toxic.

The main method Pan uses to analyze microplastics is infrared microscopy and spectroscopy. He has partnered PerkinElmer, an analytical instruments and diagnostics solutions provider, in detecting microplastics and testing their composition.

In one experiment, Pan is attempting to determine how microplastics affect the organs of mice. "Right now, most of the experiments are being conducted on marine animals, so I want to assess the damage microplastics can do when ingested by mammals," he said.

He has discovered that very small particles can enter a mouse's blood vessels, liver and even heart. He will soon publish a paper about his findings.

Another concern is that microplastics attract other pollutants, such as microbes, and could also spread pathogens.

"Microplastics are like a Noah's Ark for bacteria," Pan said. His team has been collecting samples from the sources of major rivers in China through to their estuaries to study cases of microplastics spreading pathogens.

The potential environmental and health threats posed by microplastics and their complexity have prompted a surge of research in the field. Scientists are racing to answer questions about the distribution and flow of marine microplastics, how they affect the ecosystem, and what that may mean for humans in the long term. 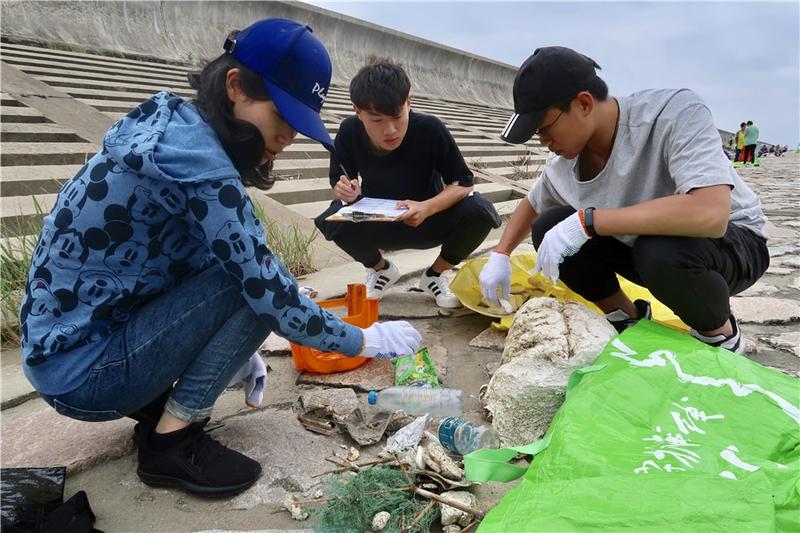 Liu Xiao, marketing director for the Asia-Pacific region at PerkinElmer, said the company is working with 10 major laboratories in China to analyze microplastics via infrared spectroscopy(with microscopy and imaging), which is the primary analytical technique used globally for the detection and identification of microplastics and their additives.

Sun Chengjun, a researcher at the Ministry of Natural Resources' First Institute of Oceanography, has been studying the environmental impact of microplastics since 2013. She has conducted laboratory experiments to see how they interact with heavy metal pollutants and other persistent organic pollutants.

She and her colleagues have also collected samples in coastal waters and the deep oceans. Last year, while traveling with the Chinese oceanic research vessel Xiangyanghong 01, Sun discovered microplastics in Antarctic waters, which was a first for related research in China.

"Before, we didn't have many firsthand samples or much data about microplastics," Sun said. "Now, we already have a basic understanding of the situation with microplastics pollution in China's coastal waters. It is not much worse than in other countries."

"There is no direct evidence of harmful effects of microplastics on human health, but the lab results provide us with an extreme case of what could happen. The aim of our research is not to frighten people, but to provide an early warning," she said.

"Nothing is good when used in excess. We should be more cautious in the use of plastics, while the concept of reducing, reusing and recycling plastic should be strengthened among the public." 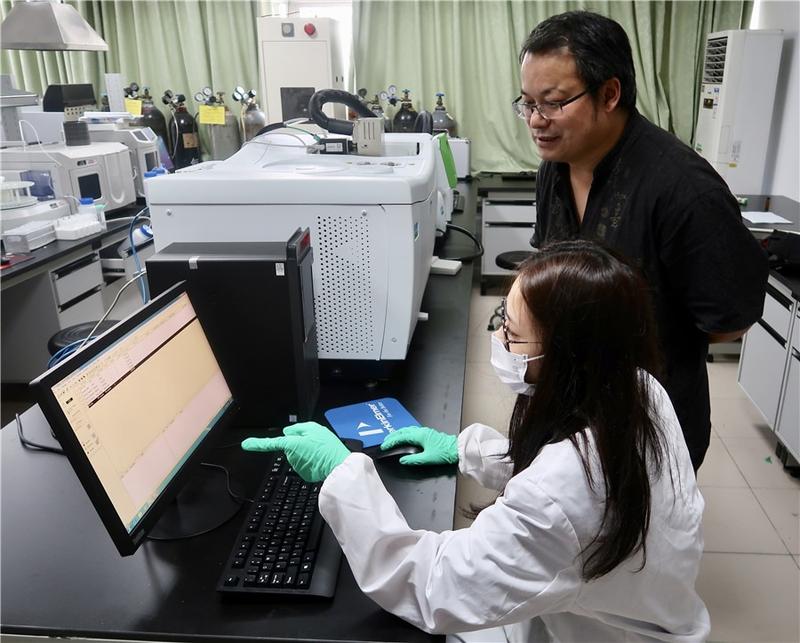 Scientists are still trying to pin down microplastics in the real world and evaluate the risks, but most have reached a consensus that the further spread of the material in the ocean should be prevented.

Scientists are still trying to pin down microplastics in the real world and evaluate the risks, but most have reached a consensus that the further spread of the material in the ocean should be prevented

Microplastics in the ocean are like water poured out of a jug which cannot be put back in. Given their often minuscule size and widespread distribution, it's impossible to remove them from the ocean, so they have to be stopped at source.

The Tara Ocean Foundation has been researching microplastics since 2010, and it estimates that 80 percent of plastic waste found at sea originates on land, rather than ships.

Romain Trouble, the French foundation's executive director, said, "What we have seen over the years and miles across the world is that this pollution has reached the far end of our oceans ... and most of these small plastic particles are found in our estuaries, so the priority is to tackle the flow."

On May 27, the foundation's schooner Tara began a six-month expedition to explore 10 major European rivers and identify the sources and behaviors of microplastics as they disperse into the ocean, and to understand their impact on marine biodiversity and the food chain.

"This pollution must be seen as an everyday bleed of plastic - a bleed we must stop as soon as possible," Trouble said.

Ju Maowei, a researcher at the National Marine Environmental Monitoring Center, said uncontrolled plastic waste is the main source of marine microplastics in China. He estimates that the country produced 6.3 million metric tons of plastic trash in 2017, and about 12.6 percent of it has entered the sea.

During field investigations, Ju has discovered that sources of China's marine debris include poorly managed landfills in coastal cities, illegal dumping of trash in coastal villages, abandoned fishing gear and containers in aquaculture farms, domestic waste dumped in the lower reaches of rivers and beach litter left by tourists and local residents.

"In recent years, government agencies have issued a number of policies on waste management, and local governments have invested a lot in the waste treatment infrastructure, which have all been helpful in reducing marine debris," he said, citing Hainan province's ban on the production and use of nondegradable plastic products as an example.

"A national program of trash sorting is needed because it could well hold back the microplastics at source, and it is also very important to educate the public about marine debris," he said.