By Shi Jing in Shanghai 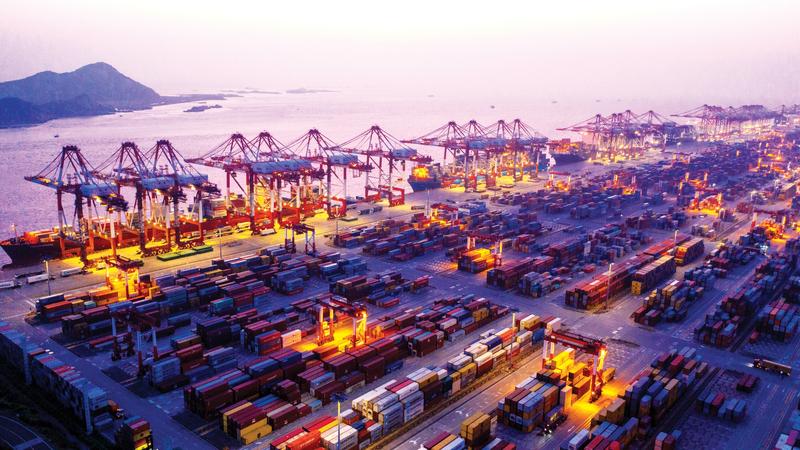 Shanghai Yangshan Deepwater Harbor, the largest smart container wharf in the world, handles a staggering number of sea containers every day without the need for any human intervention. (JI HAIXIN / FOR CHINA DAILY)

The Yangtze River Delta region will become a key conduit for China’s new round of opening-up, experts said.

A new master plan was unveiled by the central government at the beginning of December to advance the integrated development of the region, which accommodates one of China’s most economically vibrant urban agglomerations. Under the plan, cities in the Yangtze River Delta will make joint efforts to promote opening-up at a higher level.

The China International Import Expo — already held in Shanghai for two consecutive years — should serve as an important gateway for companies in the region to explore more business opportunities across the world, according to the plan.

Tong Jisheng, chairman of Shanghai-based conglomerate Orient International (Holding) Co Ltd, said the company has helped build the Hongqiao imported goods exhibition and trading center, which will allow exhibits at the CIIE to take priority when entering the trading center’s bonded warehouse. This will help build Shanghai into an import goods center that serves not only the Yangtze River Delta region but also the rest of the country.

According to the recently released master plan, the 358,000-square-kilometer Yangtze River Delta region is about the same size as Germany and encompasses Shanghai and parts of Zhejiang, Jiangsu and Anhui provinces. The region accounts for one-fourth of China’s GDP and a third of foreign trade and investment.

Hu Jiangyun, director of the foreign economy research department at the Development Research Center of the State Council, said the Yangtze River Delta region should not only lead China’s economic development but, more importantly, become a role model globally in terms of an area’s coordinated development.

“China’s opening-up has entered a new stage, for which the Yangtze River Delta region should play a key role,” he said.

According to Xu Hongcai, deputy director of the economic policy committee of the China Association of Policy Sciences, Shanghai has always been a pioneer regarding China’s opening-up. Innovative efforts such as the free trade zone, which was first introduced in Shanghai, are now radiating out through the rest of the Yangtze River Delta region. Therefore, the neighboring cities should work even more closely with Shanghai to seek higher-quality development.

The Yangtze River Delta region should aim at building a first-rate business environment and a new high-standard mechanism for opening-up.

To this end, innovation in human resources management should be introduced initially as this is a prerequisite of industrial upgrading and transformation, as well as for the development of modern high-tech industries.

In this sense, the household registration and social security systems in cities in the Yangtze River Delta region should be connected to facilitate the free flow of human capital, Xu suggested.

About 75 percent of the annual turnover of Bosch China, which has its regional headquarters in Shanghai, comes from operations in the region, Chen said, and three-fourths of Bosch China’s workforce is based in the area. Among the 10,000-plus employees at its Suzhou factory, nearly half are engineers who frequently travel between Suzhou and Shanghai.

“As the development of the cities in this area will be further coordinated, it is our hope that there will be free flow of people, which will benefit companies of our kind,” Chen said.

Shanghai has always been a stronghold for multinational firms in China. So far, a total of 710 multinational companies have set up their regional headquarters in Shanghai, while another 453 have built their research and development centers in the city, according to the Shanghai Municipal Commission of Commerce.

“Shanghai working as a hub for both management and technology talent is one of the major reasons for establishing the regional headquarters here,” he said.