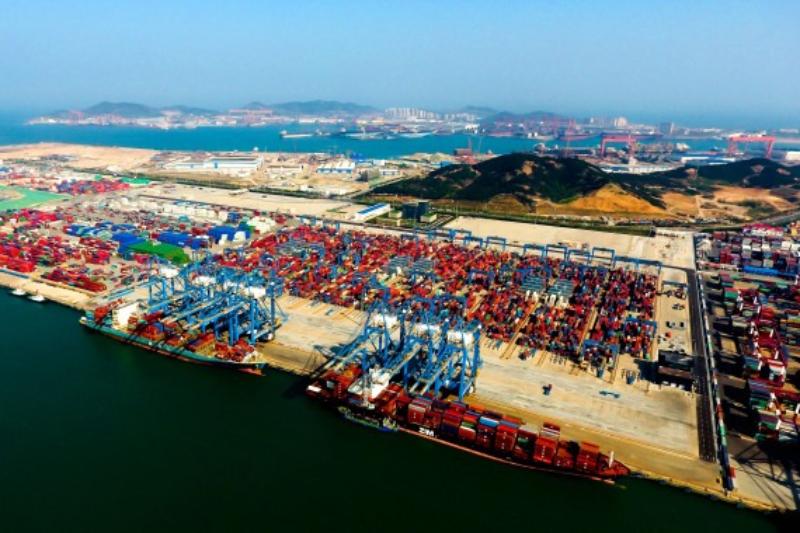 An aerial photo taken on May 4, 2018 shows a container dock of Qingdao Port in east China's Shandong province. (PHOTO / XINHUA)

China's processing trade declined by 2.4 percent year on year in the first five months, with general trade registering rapid growth and expanding its proportion of the total trade volume

An improved industrial structure will strengthen China's competitiveness in the global market, boosting the country's confidence to cope with external uncertainties.

On the other hand, though China's trade with the US declined significantly during the period, it has seen continuous trade growth with other major markets including the EU, ASEAN and Japan.

Apart from major economies, China's trade with countries participating in the Belt and Road Initiative increased by 9 percent during the period, with the pace of growth higher than the overall pace. Its trade with Belt and Road countries also accounted for a higher percentage compared with the same period last year.

With both internal and external encouraging signals, it is easy to see that a hard blow to China's foreign trade will not happen.

In addition, as China firmly upholds its opening-up policy, its development will continue benefiting other countries by creating jobs, investment opportunities and trade chances, especially considering the slowdown of international trade and global economic growth.

ALSO READ: China to boost consumption to shore up economy

After the temporary effects of the trade war fade away, the world will see China's sound economic fundamentals remain. The country's far-sighted plans to promote economic reform and open up its market have paved the way for the steady development of its economy.

With or without the trade war, China will carry out its structural reform and opening-up to the global market. More opportunities are in store for those willing to equally cooperate with China.