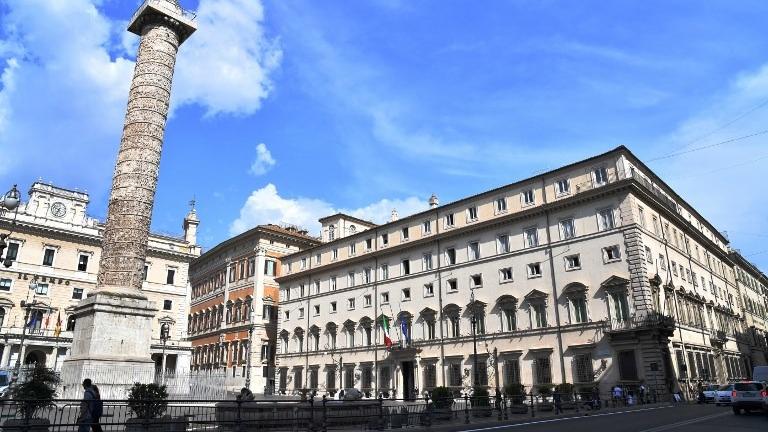 A general view shows the Palazzo Chigi, official residence of the Italian government, in central Rome on May 30, 2018. (ANDREAS SOLARO / AFP)

An English version of the full text of the article is as follows:

-- A New Chapter of Sino-Italian Friendship

President of the People's Republic of China

It is a great pleasure for me to pay a state visit to the Italian Republic at the invitation of President Sergio Mattarella in this blossoming season of spring. In 2011, I visited Rome on celebrations of the 150th anniversary of Italian unification and, in 2016, I had a stopover on Sardinia. I was deeply impressed by the way of life and industrial outlook of Italy that blend together the ancient and the modern, the classic and the novel. Now that I am about to set foot again on this beautiful country, it feels like I am to be among old friends and get immersed in their wonderful hospitality.

China and Italy are both stellar examples of Eastern and Western civilizations, and both have written splendid chapters in the history of human progress

China and Italy are both stellar examples of Eastern and Western civilizations, and both have written splendid chapters in the history of human progress. Being the birthplace of ancient Roman civilization and the cradle of the Renaissance, Italy is known to the Chinese people for its imposing relic sites and masterpieces of great names in art and literature. Friendly ties between our two great civilizations go back a long way. As early as over 2,000 years ago, China and ancient Rome, though thousands of miles apart, were already connected by the Silk Road. During the Eastern Han Dynasty (AD 25-220), Chinese emissary Gan Ying was sent to search for "Da Qin", the Chinese name of the Roman Empire at the time. Roman poet Virgil and geographer Pomponius Mela made many references to Seres, the land of silk. The famous explorer Marco Polo's Travels roused the first wave of "China fever" among European countries. That pioneer of cultural exchanges between East and West was followed by a long list of personages in search of friendship over the centuries.

In our own era, China-Italy relations, tracing the footsteps of our ancestors, are brimming with dynamism. The People's Republic of China and the Italian Republic established diplomatic relations in 1970. In 2020, the two countries will celebrate the 50th anniversary of our relations. Through the past decades, our two countries have enjoyed mutual trust and close cooperation regardless of changes in the international landscape. Together, we have set a fine example of mutually beneficial relations between two countries that have different social systems, cultural backgrounds and stages of development. The traditional friendship between us, stronger than ever, has become a strong pillar supporting the rapid and steady growth of our bilateral ties.

Sino-Italian friendship is rooted in our long history of exchanges. In the course of over two millennia, our two countries have embraced the principles of mutual respect, mutual learning, mutual trust and mutual understanding in our interactions, principles that underpin our long-lasting, ever-strong friendship. Confronted by the transformations and challenges of today's world and informed by our deep appreciation of history, China and Italy both envision a new type of international relations that are built on mutual respect, fairness, justice and win-win cooperation, and a community with a shared future for all mankind.

Sino-Italian friendship is embedded in our deep strategic trust. Both countries' leaderships approach our relations from a strategic and long-term perspective. Since the establishment of a comprehensive strategic partnership in 2004, our two countries, guided and driven by high-level exchanges, have given each other understanding and firm support on issues concerning our respective core interests and major concerns. Our strategic trust provides a firm underpinning for the long-term and steady growth of China-Italy relations.

Sino-Italian friendship is reflected in our multi-faceted cooperation. As key trading and investment partners for each other, China and Italy have deeply entwined interests. Two-way trade exceeded US$50 billion in 2018 and investment surpassed US$20 billion in accumulative terms. "Made in Italy" is a guarantee of quality, Italian fashion and furniture are immensely popular with Chinese consumers, and pizza and tiramisu are the love of many young Chinese. Every now and then, we hear stories about the success of Sino-Italian cooperation in satellite R&D and manned space exploration. Initiatives such as the China-Italy Science, Technology and Innovation Week, joint police patrols and football training, to name just a few, are applauded by people in both countries.

Sino-Italian friendship is carried forward through our intensive cultural exchanges. Chinese and Italians have a deep interest in each other's cultures. A Chinese professor in his 70s spent 18 years translating Dante's Divine Comedy, and after revising several drafts, completed this mammoth task before his final days. From Martino Martini, author of the first Chinese grammar book in Europe, to Giuliano Bertuccioli and Federico Masini who wrote Italy and China, many Italian Sinologists have built bridges between Europe and China and contributed to a long-running boom of China studies on the Apennine Peninsula.

The well-known Italian writer Alberto Moravia once wrote, "Friendships are not chosen by chance, but according to the passions that dominate us." In a world that faces profound changes of a kind unseen in a century, the onus is on us to bring China-Italy relations to a higher level and to jointly safeguard world peace, stability, development and prosperity. Through my upcoming visit, I hope to work with Italian leaders to map out the future of our relationship and move it into a new era.

China hopes to work with Italy to strengthen our comprehensive strategic partnership. Our two countries may plan more high-level exchanges and cooperation between our governments, parliaments, political parties and subnational entities, strengthen policy communication, enhance strategic trust and synergy, and continue to give understanding and support to each other on issues of core interests and major concerns, so as to consolidate the political foundation of our relations.

China hopes to work with Italy to advance Belt and Road cooperation. Our two countries may harness our historical and cultural bonds forged through the ancient Silk Road as well as our geographical locations to align connectivity cooperation under the Belt and Road Initiative with Italy's plan to develop its northern ports and the InvestItalia program, and jointly build the Belt and Road of the new era on sea, on land, in the air, in space and in the cultural domain.

China hopes to work with Italy to expand cooperation into new areas. China will open up further to the rest of the world, and share its market opportunities with Italy and other countries through the annual China International Import Expo and other avenues. Our two countries may fully tap our cooperation potential in ports, logistics, ship-building, transportation, energy, telecommunications, medicine and other fields, and encourage our companies to partner with each other in third markets for win-win cooperation.

China hopes to work with Italy to promote closer people-to-people ties. As countries with the largest number of UNESCO world heritage sites, China and Italy have plenty of cultural and tourism resources. We may encourage our world heritage sites to forge twinning relationships and our cultural institutions and individuals to organize premium relic and art exhibitions. We may also encourage joint production of films and TV programs, the teaching of each other's languages, as well as more mutual travel and visits. Through these exchanges, we will make new contributions to the diversity of civilizations and mutual learning between different cultures.

China hopes to strengthen coordination with Italy in international affairs and multilateral organizations. China is ready to enhance communication and collaboration with Italy in the United Nations (UN), the G20, Asia-Europe Meeting and the World Trade Organization (WTO) on global governance, climate change, UN reform, WTO reform and other major issues. Working together, we will promote our shared interests, uphold multilateralism and free trade, and safeguard world peace, stability, development and prosperity.

Looking back at the last five decades, China-Italy relations have struck deep roots and borne rich fruits. Looking ahead, China-Italy cooperation will continue to flourish and prosper. The Chinese people look forward to working hand in hand with our friends in Italy to carry forward our blossoming relationship and imbue our friendship with more vitality and dynamism.