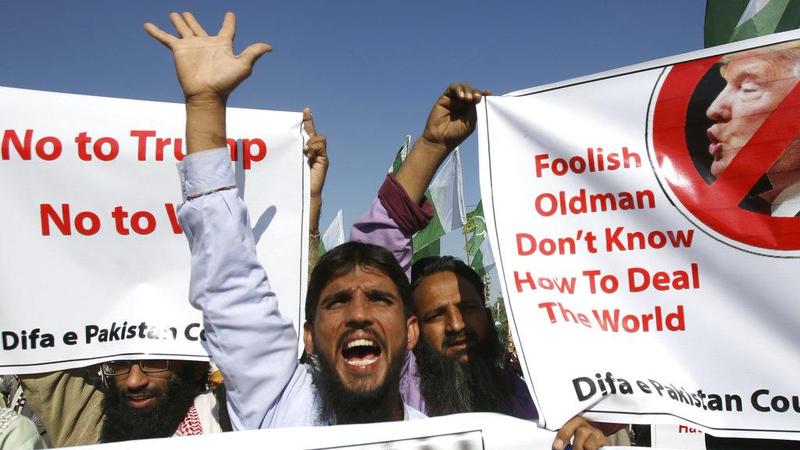 ISLAMABAD - Pakistani Defense Minister Khurram Dastgir Khan disclosed Tuesday that the country has suspended defense and intelligence cooperation with the United States amid growing tensions over US suspension of military aid to Pakistan.

US officials have said in a series of recent statements that almost all security assistance to Pakistan has been suspended following President Donald Trump's Tweet on Jan 1, in which he had alleged that Pakistan "gives safe haven to the terrorists we hunt in Afghanistan, with little help."

It is convenient to blame Pakistan for cross-border terrorism, where the US has not lifted a finger to help fence-up the border

He had also wrote, "United States has foolishly given Pakistan more than 33 billion dollars in aid over the last 15 years, and they have given us nothing but lies & deceit, thinking of our leaders as fools."

Pakistani leaders had earlier showed restraint despite allegations by the American leaders and aid suspension but the defense minister's statement could be seen as an indication of growing tension.

"You see the facilities that we have extended to them (Americans) are still in operation. We have not suspended them. But there is also a wide field of intelligence cooperation and defense cooperation which we have suspended," Dastagir said at a Public Talk on "Contours of Security Environment of Pakistan", organised by the government-run Institute of Strategic Studies Islamabad (ISSI) under its Distinguished Lecture Series.

Referring to the US suspension of Pakistan's aid, he said, "the recent suspension of military aid by the US comes in the wake of a more grave suspension, which is suspension of the strategic dialogue for more than a year between the US and Pakistan."

READ MORE: Pakistani military talks of 'response' to any US action

He also complained that the United States has not extended help to fence the border with Afghanistan in the rugged mountains to stop the cross-border movement of the militants.

Pakistan and Afghanistan have nearly 2500 kilometers border, mostly porous, and the militants take advantage of the open border to move on both sides for violence.

Pakistan last year started fencing the border and most of the fencing will be completed this year, according to military officials.

"It is convenient to blame Pakistan for cross-border terrorism, where the US has not lifted a finger to help fence-up the border," Dastgir said.

"Now all veils are off...It is time for a courteous yet ruthlessly candid dialogue between Pakistan and the United States," he went on to say.

The US has long been alleging that Pakistan is "providing sanctuaries to the Afghan Taliban and the Haqqani Network," which are blamed for attacks on the US-led foreign and Afghan forces.

The US leaders have been pressing Pakistan to take action against the Afghan Taliban and the Haqqani Network but Dastagir said "Pakistan remains adamant that the Afghan war will not be fought on Pakistani soil."