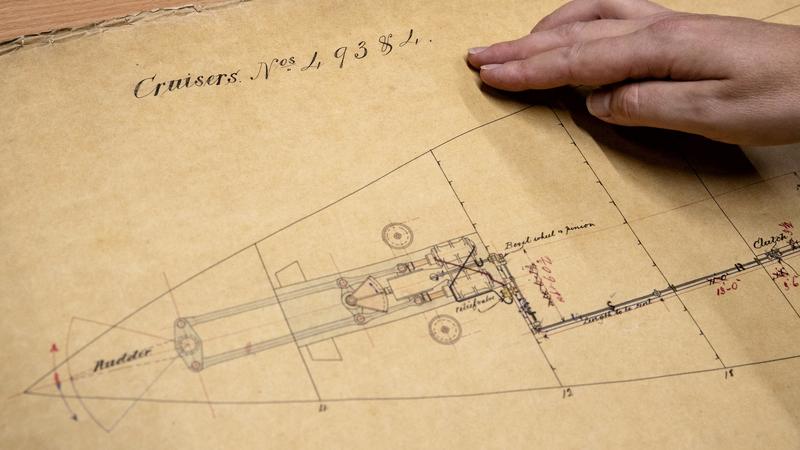 A design for the Chih Yuen is kept in archives in Newcastle upon Tyne, England. (PHOTO / XINHUA)

Although the Chih Yuen was one of China's shortest-lived battleships, it remains one of the country's best-known symbols of bravery and patriotism.

The 2,300-ton vessel was completed by the Armstrong Shipbuilding Co in Newcastle upon Tyne, England, on Oct 20, 1885. One year later, it joined the Beiyang Fleet of the Imperial Chinese Navy of the Qing Dynasty (1644-1911) as one of its major battleships.

Xu Hua, researcher of the Sino-Japanese War with the Chinese Military Museum

A Chinese crew trained in Newcastle upon Tyne and sailed the ship to Xiamen, Fujian province, with three other vessels - one built at the Armstrong plant, and the other two by Bremer Vulkan, a shipbuilder in Germany.

During a five-hour battle in the Sino-Japanese War (1894-95) on Sept 17, 1894, the Chih Yuen and three other battleships of the Beiyang Fleet were sunk by the Imperial Japanese Navy in the Yellow Sea off Dandong, Liaoning province.

But the Chih Yuen has attracted more attention than the other three because of its attack on the Japanese flagship Yoshino before the Chinese vessel sank after a boiler explosion. Only seven of the crew of about 250 were rescued.

The Beiyang Fleet included 105 ships of various types, including at least 10 world-class cruisers and battleships. It heralded not only the start of China's modern navy, but also ranked ninth globally in terms of tonnage.

The Sino-Japanese War, in which the entire Beiyang Fleet was lost, marked a turning point that diverted the nation's attention on national defense from the land to the sea.

The Chih Yuen, as the "pearl" of the Beiyang Fleet, became a focal point for both its glory days and sudden fall.

Historians said that under orders from the vessel's captain, Deng Shichang, who became a national hero, the Chih Yuen attempted to ram the Yoshino at full speed while coming under heavy fire. The Japanese ship was damaged in the same battle.

But their account has been challenged by recent discoveries from the wreck of the Chih Yuen, which lies about 20 meters below the surface of the ocean near Dalu Island off the coast of Dandong.

The investigation uncovered some 120 items from the shipwrecks as well as other sunken ships. It was organized by the National Cultural Heritage Administration's Underwater Cultural Heritage Protection Center and the Liaoning Institute of Cultural Relics and Archaeology.

The discoveries included damaged weapons, items for daily use and a broken porcelain plate bearing the name Chih Yuen in both roman lettering and Chinese characters. This has been viewed as direct evidence proving the identity of the wrecked ship. 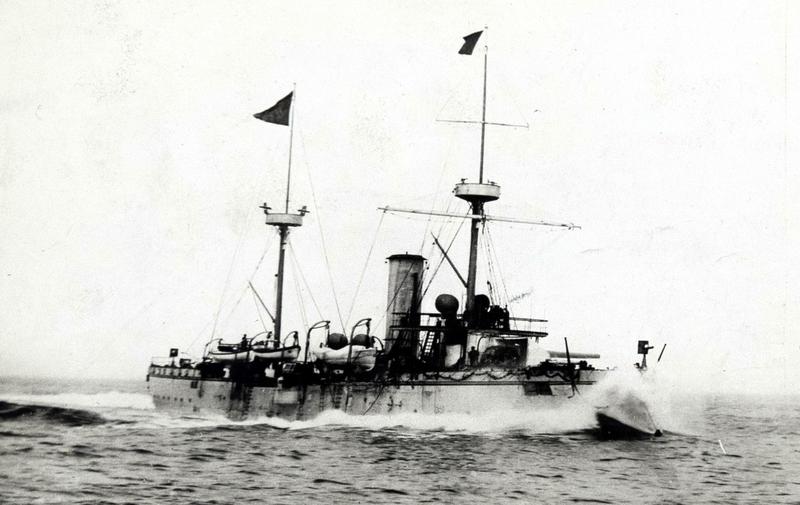 The underwater recovery operation was led by Zhou Chunshui, a researcher at the Underwater Cultural Heritage Protection Center in Beijing. He said that parts of the Chih Yuen's boiler lay scattered in the muddy depths over a large area, indicating an explosion had occurred before the vessel sank.

Many parts of the ship, most of them buried in 3 meters of mud, were distended and damaged, and it appeared that a large fire had been extinguished suddenly.

Zhou said, "Unexpectedly, we found a torpedo with its detonator, indicating that the Chih Yuen had not lost its combat ability as historians claimed. Planting the detonator meant the torpedo was ready to be launched at any time."

Sa Su, a historian who studies wars between China and Japan, said the new findings also show there is a possibility that Deng, the captain, had not intended to ram the Yoshino, but had aimed to move as close as possible to it to increase the accuracy of a torpedo attack.

"This would have been a fatal gamble as well, since it would have exposed the ship to close fire from the Japanese fleet. It is highly possible that its boiler was hit during this time," Sa said.

In 2014, the Underwater Cultural Heritage Center signed a cooperation agreement with Dandong Port Group, funding it to protect the shipwrecks for the next five years. Since then, at least one tugboat has been sent to patrol the waters near both wrecks every day.

Song Peiran, the group's vice-president who is in charge of the protection work, said the company is required to protect cultural relics, as the shipwrecks were found in waters near the port.

According to Chen Yue, chairman of the Society of Chinese Navy History, the Japanese navy returned to the waters on Sept 18, 1895, in an attempt to salvage two sunken warships, including the Chih Yuen, but failed. It used a torpedo to sink a half-submerged light cruiser abandoned by the Chinese navy during the war.

Residents of Dalu Island, which covers 6.6 square kilometers and is just over 18 km from the scene of the Chih Yuen sinking, said their grandparents told them that in 1894 they had saved the lives of many wounded Chinese sailors.

They also said the Japanese navy sailed to the area in 1937 - when a diver from Japan died in the salvage attempt - and also in 1938 to dismantle iron and steel parts from the wrecks. The parts were piled on the island before being taken to neighboring Dalian, Liaoning, for recycling to make new weapons for Japan during the War of Resistance Against Japanese Aggression (1931-45). 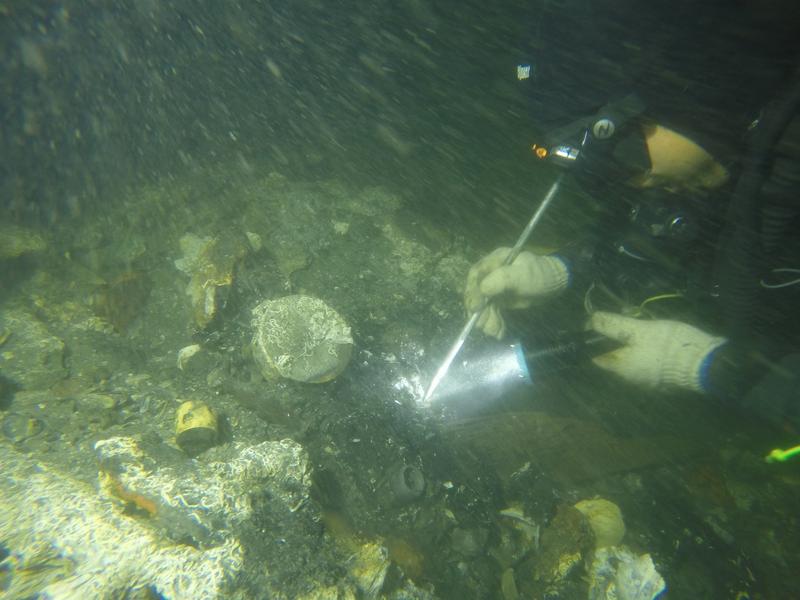 Items found from the wreck of the Chih Yuen about 20 meters below the surface of the ocean. (PHOTO / XINHUA)

Yu Kaichen, a fisherman from Dalu Island, said his grandparents had told him that before the Japanese arrived in 1937, the main masts of some sunken warships could be seen when the tide ebbed. Fishermen had to steer clear of the waters in case their nets became entangled in the wrecks.

Li Manxian, another fisherman from the island, said his father was employed by the Japanese to supply oxygen to a diving machine. He told Li that Wang Xunian, a diver from Dalian, had been hired by the Japanese to install explosives to break up the iron and steel parts.

Records show that Wang found a skeleton in the Chih Yuen's wheelhouse and brought this back to Dalu Island, where it was buried and worshipped by locals who believed it to be that of Deng, the captain. The tomb became a tourist attraction in 2002.

But Chen said there are no records in Japan of the salvage attempts made in 1937 and 1938, and according to witness accounts, Deng was on deck while his ship sank, and he drowned together with his dog, who was trying to save him.

The divers' findings match accounts of the Japanese salvage attempts by the islanders, as only the Chih Yuen's hull remains, with all the equipment on deck being destroyed, said Li Feiyan, who took part in the underwater investigation. Li also said some sailors' remains were found in the hull.

Following the success of the TV play Beiyang Fleet in the 1990s, many people donated money and urged the central government to salvage the wreck of the Chih Yuen. However, due to a lack of technology and funding, the project was unable to go beyond locating the waters where the ship sank.

Chai Jun, a researcher with the Chinese National Academy of Arts and one of the project initiators, said, "Supporters said we were salvaging the soul of the nation, but we underestimated the difficulty of the work."

Zhang Zongyi, who chairs the Dalu village committee, said, "If the Chih Yuen was salvaged today, all the 3,400 residents of Dalu Island would support this, because it would provide the island with a golden opportunity to develop tourism."

Some experts also support salvaging the wreck of the most legendary warship in China's naval history.

Xu Hua, a researcher of the Sino-Japanese War with the Chinese Military Museum, is one of them. He said an important reason that the studies on the war have made no progress over the years is a lack of source materials and items, meaning that researchers can only rely on old files.

"Salvaging the Chih Yuen would provide a large amount of first-hand material to provide a breakthrough in research on not only the war but also China's naval history," Xu said. 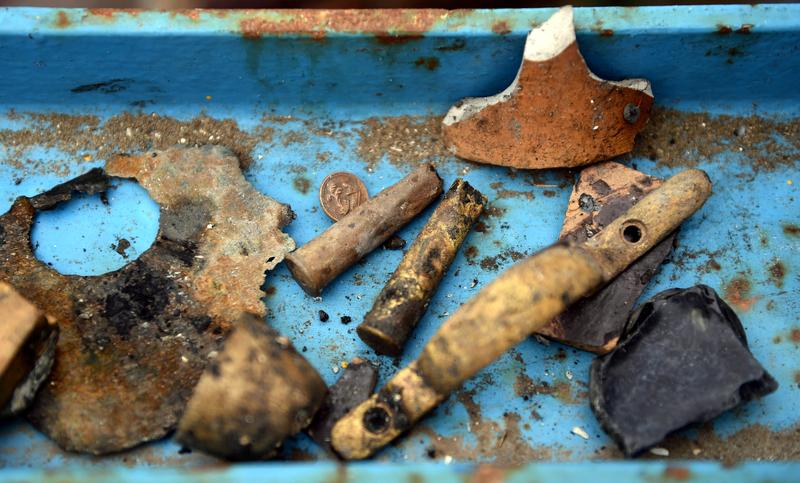 Items found from the wreck of the Chih Yuen about 20 meters below the surface of the ocean. (PHOTO / XINHUA)

However, salvaging the vessel is not on the National Cultural Heritage Administration's agenda.

Zhou said the focus is now on archaeological survey work, which is different from a salvage operation or preparing for one.

"A large-scale archaeological survey has not been started. It takes a long time to pump out sand and mud, and screen this carefully for any valuable items. Only completion of an archaeological investigation will provide suggestions on whether or how to salvage the wrecks," Zhou said.

He added that those parts of the Chih Yuen's hull that remain were damaged by explosions, fire and Japanese "exploitative" salvage efforts, making recovery work difficult.

However, such work is technologically possible, as China has mastered the advanced salvage technology that is required, and accumulated a certain amount of experience in recent years during difficult recovery work on shipwrecks that happened nearly 1,000 years ago.

Wu Yanliang, head of the Liaoning Institute of Cultural Relics and Archaeology, said it will not consider salvaging the wrecks until all "conditions are right to make sure it is 100 percent safe".

Wu said: "The National Cultural Heritage Administration has mobilized top experts in underwater archaeological investigation to take part in the ongoing survey of the Chih Yuen shipwreck. We are working on a more detailed plan that will make the project more efficient and productive while paying special attention to protecting the ship."

Cui Yong, head of the underwater archaeology center at the Guangdong Institute of Cultural Relics and Archaeology, who is working on the project, said that although China has the technology to salvage the vessel, an assessment is still required on whether it is better to leave the wreck on the seabed.

Mu Zhonghuai, deputy secretary-general of the Liaoning Society of Sino-Japan War Studies, said, "The Chih Yuen has been there for more than 120 years, and will probably collapse in the process of salvaging, as seawater has seriously eroded the hull. Allowing it to rest on the seabed is apparently a better option."

But Mu said the Liaoning authorities should do more to research the war and develop tourism.

He cited the example of Weihai, Shandong province, a port city at the tip of the Shandong Peninsula on the Bohai Strait that was home to the Beiyang Fleet. Weihai has been a research and tourism center for the war for decades, even though most of the shipwrecks are in waters off Liaoning, and most of the naval battles took place near the Liaodong Peninsula.

Dandong is preparing to build a museum on the war, and a life-size replica of the Chih Yuen, sponsored by local businesspeople, was completed in the city in late 2016 as a tourist attraction.

Ye Weili, the fifth-generation grandson of Deng, the Chih Yuen captain, stressed that future salvage work, if possible, must be carried out in a scientific way to protect the vessel and its cultural relics.

"I hope a monument to all the 3,000 or so sailors in the naval war can be built so that their descendants can visit it," Ye said.